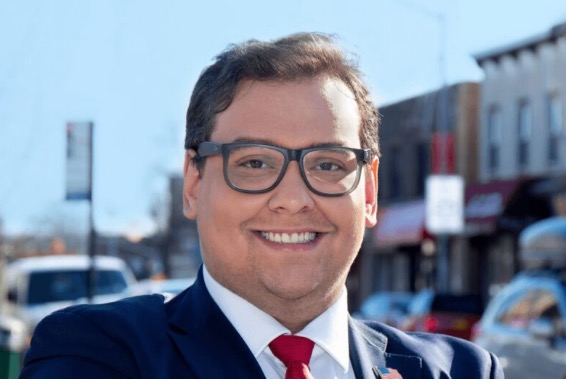 LGBTQ POLITICS - Even by the relaxed standards of politicians, George Santos has a distant relationship with the truth. He can barely say “hello” without telling a lie, and hardly a day goes by without the media uncovering some new whopper that Santos used to inflate his image.

But in one sense, Santos fits right at home in today’s Republican party. From the open grifting to the flirtation with the party’s most anti-LGBTQ elements, he’s the epitome of the depths to which gay Republicans have sunk.

That’s not to suggest that every gay Republican is an inveterate liar who steals money meant to treat dying dogs. For a long time, gay (and they were primarily gay, not broadly LGBTQ+) Republicans were pretty comfortable in the establishment wing of the party, often moneyed and thus enamored of the GOP’s love of tax cuts. The culture war was an annoyance, but it’s not as if donors weren’t welcomed on the cocktail circuit.

Of course, money still matters. But in the era of Trumpism, the money is often from grifting. You don’t have to come to the party with money in your pocket. You can make your fortune off your identity.

There are a lot of right-wing donors with deep pockets willing to bankroll anyone who works against the standard narrative of what a Republican looks like or who should be a Democrat. One black woman scammed Republicans out of thousands of dollars by pretending to have been disowned by her parents because she backed Trump.

Enter someone like George Santos. There was a gay immigrant who loved to complain about how much the liberals discriminated against him because of his “political opinions.” Then there was this: 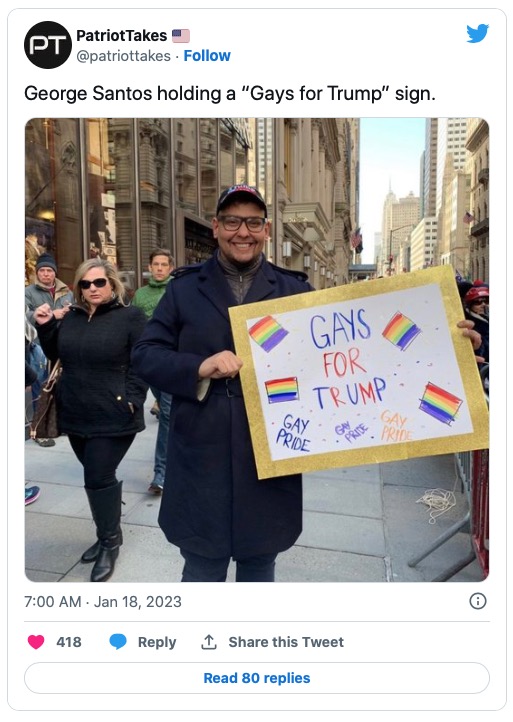 Republicans in the era of Trumpism have gone so far around the bend with their disdain for policy and ethics that they reward performative nonsense like intelligence, integrity, and hard work. It is no surprise that many GOP operativesknew that Santos’ resume was a pack of lies and decided to do nothing about it. What mattered more was the image that Santos presented of a GOP open to anyone who agreed with its standards.

Of course, that’s not true either. Santos’ hero, Donald Trump, unleashed a series of attacks against the LGBTQ+ community when he was president. Santos said during his first Congressional campaign in 2020 that he “had disagreements” with the president but supported him “70% of the time.”

In short, Santos was providing cover for Trump’s attacks, which made him even more valuable to the party.

Meanwhile, the party happily looked the other way – and continues to look the other way – when it came to Santos’ personal life. Boyfriends? It doesn’t seem to matter, even while Pete Buttigieg’s marriage is repeatedly questioned on right-wing media. Drag queen? Not a peep from the outrage chorus, whose rhetoric has contributed to the violence surrounding drag queens reading at libraries.

And the congressman repeatedly admitted to one lie after another.

It’s not like Santos is the first in this line. Milo Yiannopoulos blazed this wretched trail as the flamboyant gay outrage machine. It was a successful and lucrative gig for quite a while until he went too far and suggested that sex between priests and underage boys might not be all that bad. That was the end of the gravy train for Yiannopoulos, who suddenly found the well of right-wing money dried up for him.

Santos’ big mistake is that he decided to apply his grifting to an election, where there are laws that can be broken and paper trails that reporters can follow (if later than they should have). Given Santos’ track record, he appears to be more of an opportunist than a strategist when identifying potential marks. He probably assumed he would lose his election again, and no one would bother digging into his background.

Had that been the case, he would have been able to create a new persona on the outrage circuit. It’s not hard to see Santos as a talking head on Fox News trashing Buttigieg and defending the Supreme Court for going after marriage equality. After all, think of all the money he would have made.

(John Gallagher has been covering LGBTQ issues since 1991. He was formerly a senior news editor and correspondent at The Advocate. He is co-author of Perfect Enemies: The Religious Right, the Gay Movement, and the Politics of the 1990s. This story was first published in LGBTQnation.com)