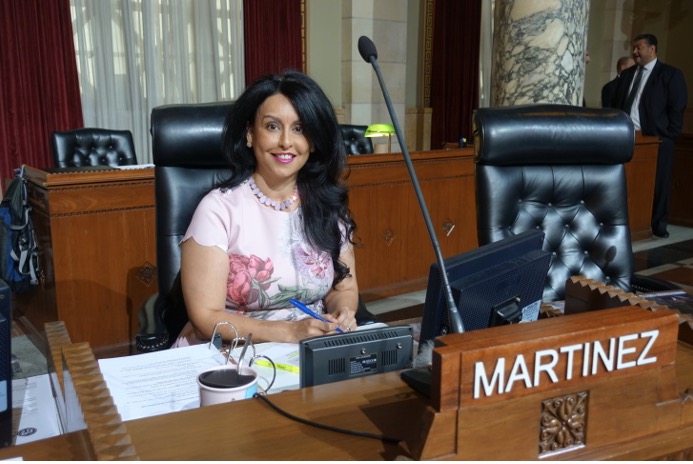 to report within 90 days with options for a ballot measure for the November 2022 ballot to amend the City Charter to create an Independent Redistricting Commission for the City of Los Angeles.”

The call for an Independent Redistricting Commission was the result of the controversy associated with the decennial redrawing of the City’s 15 Council Districts that was based on the 2020 Census. In October, the 21 politically appointed members of the Redistricting Commission submitted poorly conceived maps that were unacceptable to many members of the City Council because they would result in “drastic changes” to the boundaries of some council districts, including those of Nithya Raman, Paul Krekorian, and Bob Blumenfield.

[In 2010, Council President Herb Wesson manipulated the redistricting process by assigning Downtown Los Angeles to his good friend Jose Huizar.  We all know the results.]

In the end, the City Council created its own maps that they approved on December 7, 2021, hardly an independent process, but one loaded with political self-interest.

The motion calls for a discussion of the following:

It has been almost ten months since this motion was introduced, seven months after the requested time and obviously too late to qualify for the November 2022 ballot.  This is not the fault of the Chief Legislative Analyst. Rather the failure to follow through on this motion lies at the feet of City Council President Nury Martinez who has failed to make this needed reform a priority.

Will Council Nury Martinez follow through on the motion that she seconded and place on the ballot a measure to create an Independent Redistricting Commission? Or will she and the other self-serving members of our corrupt City Council continue ignore this much needed reform that has been successfully adopted by the State, the County, Long Beach, Berkeley, and other jurisdictions throughout the State?

A fundamental principle of representative democracy is that elections should be determined by voters, not by politicians who draw district maps. In many states and jurisdictions around the United States, this principle is currently under attack, with politicians at multiple levels of government drawing their own district lines to pick their voters and influence the outcome of elections.

In California, the State, several counties, and a number of cities have begun to guard against this type of political gerrymandering by turning over responsibility for political map drawing to independent redistricting commissions. These commissions are insulated from the elected officials whose district boundaries an~ being redrawn, prevent the participation of lobbyists and political insiders, and are given transparent; ranked criteria to guide the map drawing process.

The City of Los Angeles is far behind these other jurisdictions. In Los Angeles, the redistricting process that was created during the charter reform of 1999 has proven to be hopelessly flawed. First and foremost, the Los Angeles City Council Redistricting Commission is not independent of the City Council. Commissioners are selected by the elected officials of the City, including the members of the City Council whose districts are to be redrawn, and they may be lobbied and replaced at will by the very people who appointed them. Second, commissioners may have financial, political, and personal conflicts of interest that undermine the integrity of the redistricting process, with some commissioners serving as registered lobbyists or "government relations" professionals who make a living advocating before the City Council, and yet others having backgrounds as political insiders with ties to campaigns, political fundraising efforts, and potential future candidates for City Council. Finally, the City Charter does not clearly delineate the mission of the Commission, such that commissioners are free to disregard certain public testimony and prioritize certain voices over others without clear criteria to guide their decisions.

I THEREFORE MOVE that the City Council instruct the Chief Legislative Analyst, with assistance from the City Attorney and other City departments, as needed, to report within 90 days with options for a ballot measure for the November 2022 ballot to amend the City Charter to create an Independent Redistricting Commission for the City of Los Angeles. The report should include, among other topics, the following: