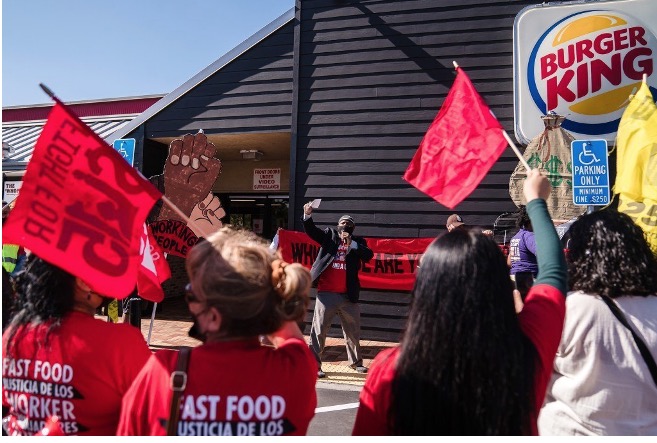 LA WATCHDOG - The Service Employees International Union (“SEIU”) and the political establishment are bent out of shape because the fast-food industry has gathered enough signatures to place the Fast Food Accountability and Standards Recovery Act (“FAST Recovery Act”) on the November 2024 ballot. By qualifying this referendum for the ballot, the law, which was scheduled to go into effect on January 1, is on hold pending its approval or rejection by the voters of California in 2024.

While the Los Angeles Times considers this referendum an abuse of the system and an effort to throw out progressive California laws, our paper of record fails to acknowledge that this law was muscled through Sacramento by the campaign financing union bosses.

The City of Los Angeles is also experiencing a similar situation.  In June, the City Council approved SEIU sponsored initiative entitled Minimum Wage for Healthcare Workers without any meaningful discussion despite the strenuous objections of the California Hospital Association and three local hospitals.  This measure would increase the minimum wage for healthcare workers in private facilities to $25 an hour.

As a result of its opposition to this SEIU sponsored initiative, the California Hospital Association gathered a sufficient number of signatures to place this initiative on the March 2024 ballot, placing its implementation on hold and subject to the approval or rejection by the voters.

The SEIU has sponsored two other initiatives involving the City’s hotel industry.

In June, the City Council approved the SEIU sponsored Hotel Workers Protection Ordinance, again without any meaningful discussion.  This will require hotels to supply workers with personal security devices, to afford workers protections from abusive hotel quests, and to pay premium wages for excessive workloads.

In August, the City Council came to their senses and voted to place the SEIU Responsible Hotel Ordinance on the March 2024 ballot.  This initiative deserved increased study because it would allow the City to commandeer vacant hotel rooms for the homeless.  You can just imagine the adverse impact on the City’s important tourism business if a deranged homeless guest attacked an out-of-town visitor in an upscale hotel.

While the tobacco industry abused the referendum system, other industries have decided to pursue the referendum process to protect their businesses and employees from policies that would have an adverse impact on operations, revenues, and profits.  This is especially true if laws are ramrodded through the State legislature or City Hall without adequate discussion or analysis about their impact.

In California and Los Angeles, the referendum is one of the few remedies that businesses have in this one-party state that is dominated by politically powerful unions.  Another remedy is to leave, one that does not serve us well.