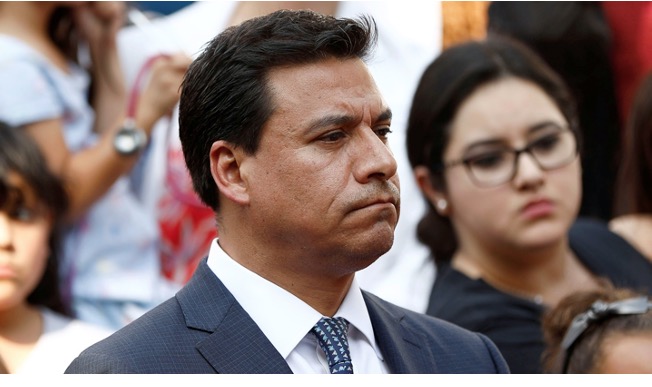 LA WATCHDOG - The trial of former Los Angeles City Councilman Jose Huizar on charges of bribery and racketeering is scheduled for February 23, over four years after the FBI and IRS raided his offices and home on November 7, 2018.

He has pleaded not guilty to all charges.

But the odds of Huizar beating the charges are slim to none, especially now that two juries found two real estate developers guilty of providing then Councilman Jose Huizar with over $1.5 million in bribes.

In June, Dae Yong Lee (aka David Lee) and one of his companies were found guilty of federal criminal charges for providing $500,000 in cash to Huizar and his special assistant (George Esparza) in exchange for their help in resolving a labor organization’s appeal his 20-story mixed use development located at 940 Hill Street in DTLA.  Their sentencing hearings are scheduled for January 30.

On November 10, Shen Zhen New World I LLC, a company controlled by Wei Huang, a billionaire real estate developer, was found guilty of paying more than $1 million in bribes to Huizar for facilitating the City’s approval of a 77-story skyscraper at Third and Figueroa, next to the LA Grand Hotel in DTLA.  This included a $600,000 “loan” to Huizar to settle a sexual harassment suit against Huizar by a former staffer.  The sentencing hearing is scheduled for January 23 at which the company is expected to be hit with a multimillion dollar fine.

Wei Huang has also been charged in this case but is now a fugitive from justice and is believed to be living in China.

In this trial, Salvador Huizar, Jose’s older brother who pleaded guilty to lying to federal investigators and has agreed to cooperate with the U.S. Attorney’s Office, testified that he helped his brother launder cash payments on at least 20 occasions.

Also, Huizar’s mother, Isidra, and his estranged wife, Richelle Rios, and the mother of his four children, both testified that they helped Huizar launder cash through their accounts.

Besides finding over $100,000 cash in his house, the U.S. Attorney’s Office has at least four cooperating witnesses.  To date, the federal prosecutors have convicted nine defendants and collected over $3 million in criminal penalties in connection with their ongoing investigation into corruption in Los Angeles City Hall.

With the overwhelming evidence against him, many have wondered why Jose Huizar has not pleaded guilty, saving his brother, mother, wife, and children from further humiliation.   Who knows what Jose Huizar is thinking, but there is still time to cop a plea and get some leniency, especially if he could provide the federal investigators with evidence of additional corruption on higher ups at City Hall, the County, or the State. That would be delicious.