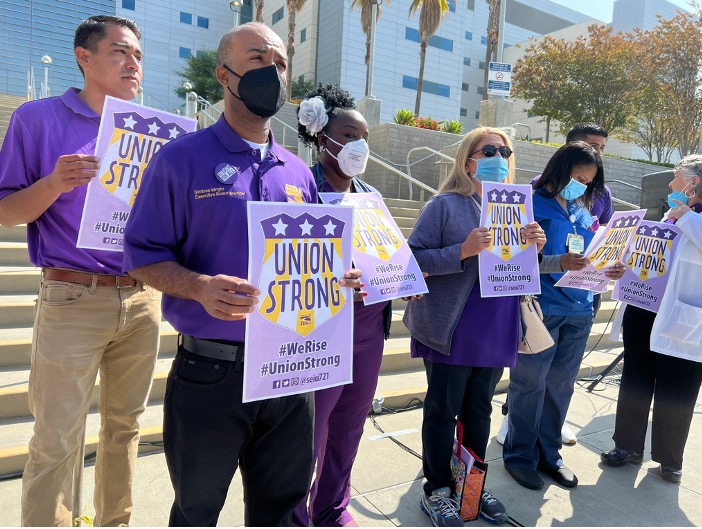 LA WATCHDOG - Unions and other special interests have collected enough signatures to qualify four initiatives for the ballot.

All four initiatives lack transparency, a strategy of the union sponsors who are trying to bamboozle the City Council and Angelenos into approving these self-serving measures that are not in our best interests.

One. In November, Angelenos will have the opportunity to vote on Measure ULA which, if approved by a majority of the voters, will raise between $600 million and $1.1 billion a year by taxing sales of real estate valued at more than $5 million.  These funds will be used to develop “affordable housing programs” and provide “resources for tenants at risk of homelessness.”

Sponsored by the SEIU, the IBEW, and the Building Trades, this initiative, the largest tax increase in the history of Los Angeles, is less than transparent because there has not been any public discussion of the operational and financial implications of this measure. It also relies on a loophole that allows for a majority vote instead of the two-thirds required by Proposition 13.

Two. In June, the City Council approved the SEIU sponsored Hotel Workers Protection Ordinance. While this measure concerned the safety and workload requirements of hotel workers, the main issue is the failure of the City Council to have an open and transparent discussion with the owners and operators of hotels who opposed this initiative.

Three. Also in June, the City Council approved the SEIU sponsored initiative entitled Minimum Wage for Healthcare Employees, once again without any meaningful discussion despite the strenuous objections of the California Hospital Association and three local hospitals.  But this effort was stymied when the healthcare industry filed its own referendum that will suspend this ordinance until it is approved (or rejected) by the voters in 2024.

Four. In August, the City Council voted to place the Los Angeles Responsible Hotel Ordinance on the March 2024 ballot instead of approving the ordinance as it did with the measures covering hotel and healthcare workers.  This SEIU sponsored initiative would impose strict restrictions on the development of hotels and allow the City to commandeer vacant rooms for the homeless.

While none of these initiatives is in our best interests, the focus needs to be on Measure ULA that is on the upcoming November ballot.  While the City, the sponsoring unions, and the real estate industry need to educate us as to why we should reject or accept the largest tax increase in the City’s history, the Flip Tax (also mislabeled as the Mansion Tax) deserves a NO vote because it will adversely impact the commercial real estate industry that will absorb about 75% of the tax burden. It will also create a massive, unaccountable bureaucracy that will continue to spend an unbelievable $600,000 to $800,000 for each permanent supportive housing unit.  See The $800 Million Homeless Flip Tax: Good Money After Bad.

The following include the summary ballot language for three of the four initiatives and the City Attorney’s description of the Los Angeles Responsible Hotel Ordinance.

ONE: FUNDING FOR AFFORDABLE HOUSING AND TENANT ASSISTANCE PROGRAMS THROUGH A TAX ON REAL PROPERTY TRANSFERS OVER $5 MILLION. INITIATIVE ORDINANCE ULA.

Shall an ordinance funding and authorizing affordable housing programs and resources for tenants at risk of homelessness through a 4% tax on sales/transfers of real property exceeding $5 million, and 5.5% on properties of $10 million or more, with exceptions; until ended by voters; generating approximately $600 million - $1.1 billion annually; be adopted?

Shall an ordinance: requiring hotels to supply workers with personal security devices and provide other protections; requiring specified hotels to pay wage premiums and obtain worker consent for workloads exceeding certain limits; and expanding the scope of the City’s existing hotel worker retention and minimum wage ordinances to apply to more hotels; with certain waivers and exceptions; be adopted?

Shall an ordinance establishing a $25 per hour minimum wage for employees working at certain hospitals and covered healthcare facilities, including clinicians, nurses, aides, technicians, maintenance workers, janitorial and housekeeping staff, groundskeepers, guards, food service workers, pharmacists, and administrative and clerical workers, but not managers or supervisors; adjusted annually for cost-of-living increases; with waivers for employers demonstrating financial hardship; be adopted?

The proposed ordinance would require a hotel development project of 100 or more rooms to obtain a land use permit based on factors including the market demand for the project and the project’s impact on affordable housing, transit, social services, employees, and local businesses. A hotel development project of 15 or more rooms would be required to replace demolished or converted housing with an equivalent amount of affordable housing at or near the project site. The ordinance would create a program, subject to funding availability, to place unhoused individuals in vacant hotel rooms. A hotel would be prohibited from refusing lodging to program participants. The ordinance would establish special police permit requirements for hotels. A hotel would need to meet specified standards, including compliance with wage theft and employment laws, to obtain a permit and avoid disciplinary action. The requirements of the ordinance would be subject to certain exceptions and waivers. (Source: City Attorney)