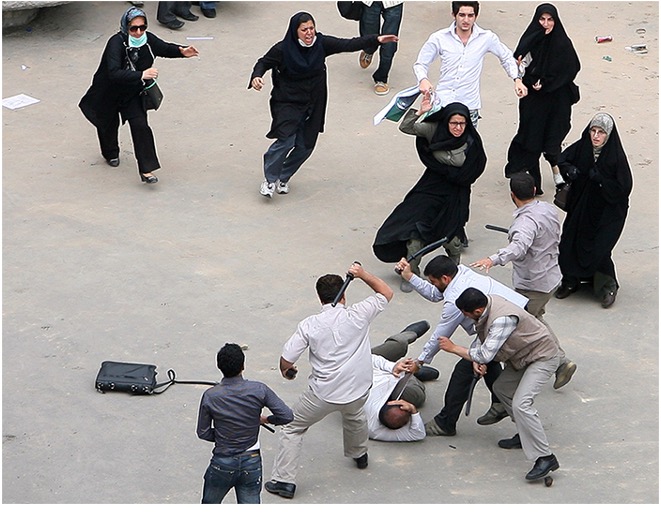 HUMAN RIGHTS - The Iranian government continues to commit human rights violations and crimes against humanity in its effort to strike terror into the heart of its people. That the government considers itself a devout Muslim regime is sacrilegious and makes a mockery of Islam.

Iran’s theocratic government is violating every grain of human rights to an extent that transcends the pale of barbaric and beastly behavior in brazen defiance of Islam’s teachings, which the government cynically claims to uphold. Its rulers are drowning ever deeper in the blood of ordinary Iranians who dare to resist this oppressive theocracy. This is evident in a recent spree of executions of Iranians accused of participating in nationwide demonstrations against the regime in the wake of the death of Mahsa Amini, a 22-year-old of Kurdish descent killed by the morality police. The hangings, the incomprehensible torture, the cruel lashings, the routine persecution, and the widespread incarceration of innocent people know no bounds.

The regime’s cruelty and hypocrisy make a mockery of the Quran with its despicably violent crackdown and these spurious trials that take no account of due process. The Quran (6:151) explicitly forbids the killing of anyone without the due process of law: “Whether open or secret; take not life, which Allah has made sacred, except by way of justice and law,” and there is no exception to the prohibition on the killing of children, even those belonging to an enemy force.

The list of the Iranian government’s atrocities against its own people is hard to numerate, but even a perfunctory glance at some of the egregious crimes the clergy is committing represent a new moral low to which historically only few despotic regimes have descended.

The group Human Rights Activists in Iran reports that at least 517 protesters have been killed since mid-September and over 19,200 people have been arrested. Scores of young women are among the dead. Iran does not simply hang its protesters, but displays their lifeless bodies suspended from cranes.

To demonstrate their utter shamelessness, in 2021 they even hanged a dead young woman who was on death row but died from a heart attack while waiting for sixteen others to be executed before her, a psychological torture that she could no longer endure. Her corpse was hung from the neck, on display for thousands of people. If this is does not debase Islam, I don’t know what does.

The authorities have been killing children in a bid to crush the spirit of resistance among the country’s youth and retain their iron grip on power at any cost. A recent report notes that “Children represent 14% of overall deaths of protesters and bystanders recorded by Amnesty International, which exceeds 300 since the protests erupted.” Contrary to international law and the Convention on the Rights of the Child, which Iran ratified in 1994, the country continues to sentence minors to death, with at least 160 such individuals facing execution, according to the UN.

The Iranian police are known for their cruelty and disregard for human life, even in regards to children, and the families of their underaged victims, unlawfully gunned down or beaten to death by security forces, face arbitrary arrest, intimidation, and harassment. They expose their inconceivable brutality through their sinister attempt to cover up their crimes by warning the relatives of the deceased child to remain silent or else face the death penalty.

Even though the Quran places immense value on every single human life – and in fact it states (5:32) that “…if anyone slew a person… it would be as if he slew the whole people: and if anyone saved a life, it would be as if he saved the life of the whole people” – the government casually ignores the Quran’s teaching, which is tantamount to blasphemy.

Thousands of people have been arbitrarily arrested and indicted since protests erupted; they are denied access to lawyers of their own choosing, and not even permitted to see the evidence against them. Amnesty International has stated that the trials “bore no resemblance to a meaningful judicial proceeding.”

Since the protests began in September, the Iranian government has passed dozens of death sentences, with the accused having faced “rapid, closed-door trials.” Ali Vaez, Iran Project Director at the International Crisis Group, observed: “The executions are aimed at creating a republic of fear in which the people don’t dare to protest.” The rate of executions has skyrocketed – 330 people in the first half of 2022, a 25 percent increase from the previous year.

Ethnic minorities in Iran in general are disproportionately convicted of vague capital charges such as “enmity against God.” As Amnesty International documents, “over 60% of the children killed were from Iran’s oppressed Baluchi and Kurdish minorities.”

Most Iranian prisons are unfit for human habitation. The prisoners at one prison, Rejaei Shahr, where most executions take place, are subject to the most horrific torture that can be imagined. From drinking contaminated water, many prisoners contract intestinal, eye, and liver diseases with little or no medical care. Many of them die without having seen a doctor.

Violence and discrimination, including flogging and the death penalty, are commonly perpetrated against LGBTQ+ persons. They are viewed as subhuman, often forced to live a life of desolation and despair until their dying day. The clergy, who supposedly believe in God’s creations without any reservation, conveniently forget that these people are also God’s creation, and that treating them like animals defies God’s will.

Many of those who have been sentenced to death have been charged with “waging war against God” (known as hirabah) and causing “corruption on earth.” The Arabic term ‘Hirabah’ is derived from ‘Harb,’ which literally means war. It is taken from the Quran (5:33) which classified hirabah as ‘waging war against God’: “Indeed, the penalty for those who wage war against God and His Messenger and strive upon earth [to cause] corruption is none but that they be killed… or that they be exiled from the land.”

Nearly all early (8th century) and later commentaries on the Quran explain that the verse originated “in response to a crime of extreme violence, torture, and murder committed against a group of innocent villagers…” Iran, however, is a “prime example” of how various Islamic governments, including the Taliban in Afghanistan, “have broadened and manipulated the definition of hirabah as a means of silencing political opposition.”

The Iranian government is simply irredeemable. Every Islamic country, religious institution, and Imam, be they Sunni or Shiite, must make their voice heard and condemn Iran’s criminal Mullahs in the strongest terms for disgracing Islam and debasing its virtues for the sake of clinging unchallenged to power.

Regardless of what measures the Iranian clergy takes however to suppress the people, the government’s days are numbered. As Spinoza observed in his Theologico-Political Treatise, tyrannical governments will always be “in as much danger from their own subjects as from external enemies.”

Indeed, although the government may well succeed in quelling, by whatever means, the current unrest, it is only a matter of time before the Iranian people will rise up again against this autocratic and ruthless regime. Khamenei and his criminal gang have lost every claim to legitimacy, by terrorizing the people, slaying its children, and holding on to power through fear and intimidation.

(Dr. Alon Ben-Meir is a retired professor of international relations at the Center for Global Affairs at NYU. He taught courses on international negotiation and Middle Eastern studies for over 20 years.).