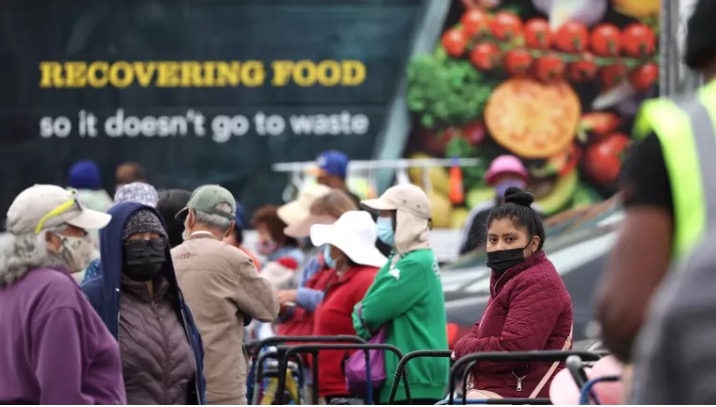 ECONOMY - Republicans believe their laser focus on inflation in the midterms will override voter anger over the attempted coup;

four years of Trumpism, multiple regressive Supreme Court rulings especially on reproductive rights, school shootings and other mass shootings, and GOP state attacks on voting, public education, and LGBTQ+ rights. But only if we, and the Democratic Party leadership, let them get away with it.

To challenge the GOP and corporate media narrative on inflation, start with exposing the underreported causes, identifying those exploiting rising prices, describing why the conservative fix of jacking up interest rates will cause far worse pain for most working people and families, and outline progressive alternatives.

Conventional reporting on the current inflation mostly blames the pandemic, both the 2021 stimulus package and barely explained supply chain issues. Plus, the Russian invasion of Ukraine, which led to oil cutoffs, another factor in higher gas prices. However, those prices have been dropping for a month, not that Fox News or Republicans running for office will admit that fact.

Supply chain bottlenecks are largely related to an over reliance on a global network aggravated by pandemic factory shutdowns, notably in tech products like semiconductors. Fewer acknowledge what progressive economist Robert Kuttner calls "the 40-year folly" of excessive outsourcing for cheaper labor overseas, and neoliberal policies of deregulating links in the chain that delay the unloading of goods from ports, and rail and trucking transport that exacerbated Covid disruptions.

The anti-recession stimulus was vital to millions of families, especially those who are low-income, single women and workers of color. Moreover, inflation was hardly confined to the United States, as John Oliver noted this week. Britain and Germany have seen the highest inflation rates in four decades, as well as Eastern Europe, Japan, and other countries also experiencing high inflation.

To dig deeper, always look closely at who controls the U.S. economy, Wall Street and big corporations generally through their profiteering practices and their enormous influence over policy makers in Congress and state governments.

Corporate profits, Los Angeles Times columnist Michael Hiltzik points out, "have played a much larger role in fueling inflation than wage increases or the currently low unemployment rate. Wages have crept higher over the last year, but the increases have trailed inflation, which is why so many workers and their families are feeling the sting of higher prices. Corporate profit margins, however, have rocketed into the stratosphere, outpacing the inflation rate and pulling it higher."

Over the last full fiscal year, 53.9 percent of what corporations are charging for their products have gone to profits while only 7.9 percent went to unit labor costs, according to Economic Policy Institute research.

How did the profits get so high? By corporations exploiting the inflationary cycle to jack up prices to massively swell their profit margins to fatten executive compensation packages and shareholder returns.

Overall, "markups and profits skyrocketed in 2021 to their highest recorded level since the 1950s … the fastest annual pace since 1955," wrote Mike Konczal and Niko Lusiani in a June research article for the liberal Roosevelt Institute.

"Here's an inflation remedy you're not hearing much about: Reduce corporate profits," Hiltzik wrote in late June.

That's not the remedy demanded by Wall Street and a long list of corporate and right-wing economists, pundits and thing tanks, and those typically in charge of administrative economic policies and federal agencies like the Federal Reserve. Their solution to inflation, based on decades of conservative political dogma, is always to punish workers and families by lowering their income through higher interest rates intended to prod companies to slash wages and jobs so workers and their families would have far less to spend, even on the most basic needs, such as food, housing, and healthcare. That's what they mean by "reducing consumer demand."

During an inflation spike in the late 1970s, then-Federal Reserve Chair Paul Volker infamously said, "the standard of living of the average American has to decline." Or as conservative economist and later Fed Chair Alan Greenspan intoned in 1997, the key to economic success is "greater worker insecurity."

Under grilling from Sen. Elizabeth Warren (D-Mass.) in testimony to the Senate Banking Committee earlier this month, current Fed Chair Jerome Powell who has already raised interest rates once, and is about to sharply raise them again, admitted the interest rate hikes would not bring down gas or food prices. What the rate increases will do, Warren responded, is "make it more likely that companies will fire people and slash hours to shrink wage costs." As Hiltzik frames it, "sacrificing jobs in the cause of reducing inflation is a cure worse than the disease."

Rather than following the punitive script favored by Wall Street and their many acolytes in the media and punditry, there are other ways to attack rising prices and protect people harmed by them. Those include targeting corporate profits, not worker wages, by, for example, a tax on excess profits as both the United Kingdom and Spain have done.

Kuttner suggests, Biden "use the government's antitrust authority to go after big companies that are using their market power to impose unjustified price hikes." The government, he adds, could specifically target the ocean shipping industry which, he notes, "enjoys antitrust immunity that it has used to jack up shipping rates and profits adding to price inflation and the entire range of imports."

Additional steps could include implementing rental assistance to keep people in their homes, restoring the child tax credit that was critical to reducing child poverty in the pandemic stimulus program, and enacting the long overdue bill to let Medicare negotiate drug prices that is apparently finally advancing in Congress. Or even enacting price controls as President Franklin D. Roosevelt did during World War II, and even President Richard Nixon did in the early 1970s.

Reversing the decades of rigid neoliberal policies would not only prioritize the vast majority of American people over corporate wealth, it would also be good politics for a party that has seemed helpless in fighting back against the gains of the right, and encourage the growth of the progressive movement that is central to achieving the transformative social change so essential for our future.

(Chuck Idelson is the Communications Senior Strategist for National Nurses United, the nation's largest union and professional organization of registered nurses with 150,000 members.)