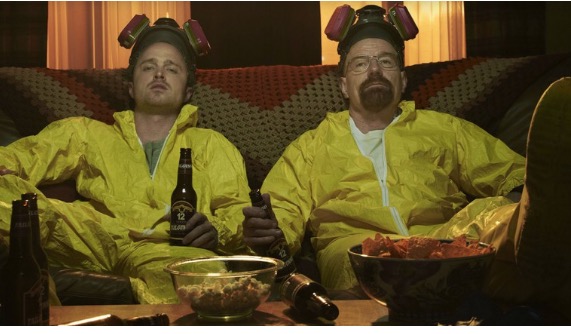 SAY WHAT? - Yeah, Mr. White! Yeah, science! And now yeah, art! Encompassing every conceivable queasy contradiction, Albuquerque this weekend unveiled two larger-than-life, suitably menacing bronze statues to honor the city's fictional, iconic, enthralling and much beloved... umm...meth dealers from the masterful Breaking Bad. If you're still (understandably) under that rock: In the singular AMC show that ran from 2008 to 2013 - and is still zealously watched, debated and re-watched - Bryan Cranston plays Walter White, a schlubby, dispirited high school chemistry teacher who, after he's diagnosed with lung cancer, turns to cooking meth as a way to provide for his family once he's gone. In his gonzo new role, he recruits Jesse Pinkman, a hapless drop out, lost boy and two-bit drug dealer played by Aaron Paul, to help him navigate the city's criminal underworld. From this bleak premise sprouts Vince Gilligan's darkly hilarious, improbably moving, ever-blindsiding marvel of consummate writing, acting, directing, cinematography and music that set a twisted, artful, staggeringly high new bar - and begat two of the most epochal characters ever - in American drama. Thus do fans feverishly deem, say, BB's majestic Ozymandias episode, "The greatest achievement of mankind." Full disclosure: Yes, we love it.

Breaking Bad is marked by its cerebral attention to detail - a   knowledge of chemistry, Walt Whitman and the table of elements helps - its Byzantine plot twists - an early, eerie shot of the eye of a burned pink Teddy Bear in a swimming pool is diligently highlighted, repeated and, many episodes later, finally decoded as a symbol of moral debasement - and its multi-layered, morally flexible main characters, who in their relationship to each other and the world evolve, and often devolve, in confounding ways that turn words like "bad" and "good" on their equivocal heads. In Walter White's narrative arc, he morphs from a brooding, brilliant, meek nerd who admits he's been fearful through most of his life into the power-mad psychopath Heisenberg - know your science - whose meticulously crafted "product" leads him to boast he's not in the meth business but "the empire business," and who ultimately, grimly declaims, "I am the danger." The often childlike Jesse, street-smart but vulnerable, is more clear-eyed: "We make poison for people who don't care - we probably have the most un-picky customers in the world." His volatile partnership with (always) "Mr. White" moves from disdain - "Like, I came begging you to cook meth, huh? 'Hey, nerdiest old dude I know, wanna come cook crystal?'" - to delight in his rare triumphs - "Yeah, bitch! Magnets!" - to hate: "Mr. White - he's the devil. You know he is."

Aptly, the two statues Gilligan and Sony Pictures just gifted to the city are bigger than life-size and loom in sinister stances. Walter, especially, looks startlingly life-like down to his dorky Wallabees; he holds Heisenberg's pork-pie hat at his side. “Over the course of 15 years...Albuquerque has been wonderful to us,” Gilligan said. “I wanted to return the favor and give something back.” Commissioned by Gilligan and created by California sculptor Trevor Grove, the statues were unveiled Friday; writer/director Tom Schnauz tweeted an image to fans with, "Look who I found in Albuquerque." The location was pre-ordained: Both Cranston and Paul have houses there; over five seasons of stunning visuals the city played its own vital, gritty supporting role in the show; and it in turn became a "walking billboard" for tourism and filmmaking in a state with the highest unemployment rate in the nation. The city offers a slew of BB-themed events and tours - including a replica of the ragged RV that was their first meth lab - the state's film and TV industry just hit a new production record, Mayor Tim Keller praises a $385 million economic impact that brought in jobs "every single day," and locals love that, "The city is also a character. We see ourselves in so many ways, good and bad."

The bad, the dark, the discomfiting juxtaposition: All the hoopla celebrates two guys who cook and deal crystal methamphetamine in a place that struggles with real-life drug addiction and its impact. New Mexico has one of the nation's highest rates of overdose deaths, and surging overdoses from meth and fentanyl now surpass heroin and other opioids as a cause of death. Says one state senator, "I'm glad New Mexico got the business, but really? We're going down the road of glorifying meth makers?" Gilligan - whose equally terrific BB spin-off Better Call Saul also, alas, portrays drug-dealers in Albuquerque - accepts that statues celebrating these evil losers "won't be universally cherished ...Some folks are going to say, 'Wow, just what our city needed." But he argues his work showcases "two of the finest actors America has ever produced" as "two larger-than-life tragic figures - cautionary tales." Art vs. messy reality: a tough call. At the unveiling, Cranston the artist offered gentle wisecracks: He was humbled to hear of the idea of two statues - "Wow, fantastic, Heisenberg and Walter White!" - and happy they'll be indoors "so the pigeons won't crap on our heads." Gone was the deranged tyrant who snarled, "We're done when I say we're done" and even the doomed, finally truth-telling king of meth: "I did it for me. I liked it. I was good at it." Damn straight, said fervent fans, who now want a Jimmy McGill statue, a Howard, a Gus Fring. "OMG, this is literally the best thing ever," one wrote. "Holy."