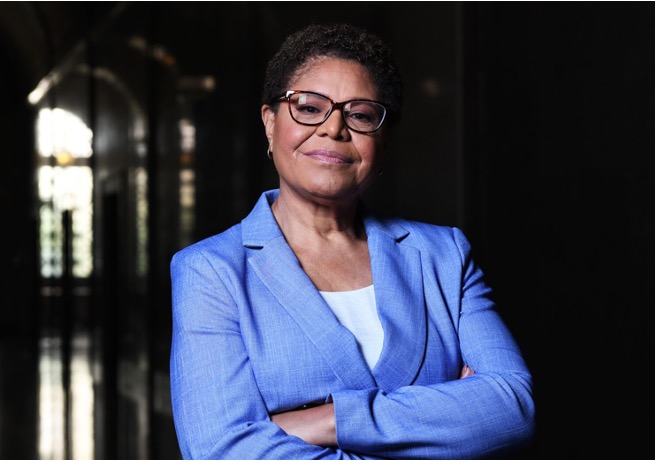 THE VIEW FROM HERE - Watergate and Tapegate both began with a relatively minor criminal act: (1) the break-in of the Democratic National Committee (DNC) in Washington DC and (2) the illegal taping of a meeting at the County Labor Federation offices in Los Angeles.  In Washington, the DNC was the target of the criminals, but in Los Angeles the targets were three Mexican councilmembers (Nury Martinez, Gil Cedillo, and Kevin de Leon), whom the Federation’s executive director Ron Herrera had invited to discuss city re-districting. A secret taping becomes a completed criminal act when the tape is made whether or not it was later used. (Penal Code, § 632 – if it is a felony, prison time can be up to three years)

Within an hour of the Watergate break-in, at 2:30 a.m on June 17, 1972 the criminals were arrested.  In contrast, over four months have passed since LAPD Chief Michael Moore learned of the criminal audio taping in October 2021. Prior Sheriff Alex Villanueva discovered that this particular taping was not an isolated instance and that others were also illegally taped by the Federation, e.g. Herrera and Hannah Cho, a former Mitch O'Farrell and later County Federation of Labor staffer, was leaked on October 15.  Not only was city hall violently stormed requiring LAPD’s riot squad to forcible eject them from city hall.  Oct 19, 2022 New York Post, BLM Protesters Clash with LA Riot Cops Outside Council Meeting, by Lee Brown, but every city council session since October 2022 has been beset with disruption, demanding that Kevin de Leon resign.  Other councilmembers have been singled out for intimidation at home and at public events.  Jason Reedy’s December 9th physical attack of Kevin de Leon at the children’s Christmas party was captured on videotape.  Dec 12, 2022 KCAL News Altercation Between Councilmember Kevin De León and Activist Jason Reedy Sparks Safety Concerns

Yet, Chief Moore has made no arrest in Tapegate and its aftermath.  Since October 2022, Chief Moore has stood passively by and watched Tapegate provoke political violence, emboldening threats of further criminal behavior, i.e., Dr. Melina Abdullah’s declaration to stalk Kevin de Leon wherever he goes.

Chief Moore Asks to be Retained as Police Chief

Because his initial term is up, Chief Moore has asked to be hired for a second term.  The Police Commission selects three candidates from which the Mayor appoints one which the city council has to confirm. The Mayor also appoints the police commission members, whom the city council confirms.  The commission’s five members are: Eileen M. Decker, president, Steve Soboroff, Maria Lou Calanche, Dale Bonner, William Briggs II, (Wikipedia)  The LAPD is a politically controlled organization and any actions which upset the political ambitions of the Mayor and city councilmembers are likely to result in adverse consequences for the Chief.  Thus, the question rises: To what extent are Mayor Karen Bass and her woker allies on the city council behind the LAPD’s failure to investigate Tapegate and its failure to arrest Jason Reedy?

Karen Bass Knows That the Tape Is Not Racist

For those who have listened to the tape or read the transcript, it is clear that it is not anti-Black, it is not anti-Gay, and it did not conspire to reduce Black representation.  People have a constitutional right to notice that a white Councilmember treats his adopted Black child as a token or a prop.  That observation is no disparagement of the child. BTW, Nury Martinez referred to the kid as “este niño.”

After it became embarrassing to persist in the lie about Bonin’s kid, a new false narrative emerged, i.e., the three Mexican councilmembers were holding an illicit meeting to sabotage Black councilmembers during re-districting. Three out of fifteen councilmembers is not a majority and three cannot subvert anyone’s council district. During the meeting, they discussed how Nury Martinez had spoken with Danny Bakewell of LA Sentinel to help quell in-fighting between two Black councilmembers so that both could benefit.

Nor, is it their fault that others had diced up CD 4, Councilmember Nithya Raman’s district.  Disliking a multi-millionaire woker carpet bagger is not a bad thing. Raman has already been subjected to one recall effort.  The City Charter gives the councilmembers the final word on redistricting and to claim that councilmembers may not discuss redistricting is ludicrous.  It is not a Brown Act violation unless a majority of the city council meets without public notice.  3/15 is not a majority.

Furthermore, Mayor Bass had to realize that she had been a percipient witness to the events surrounding Bonin’s kid at the MLK parade.  Some day the preposterous nature of the non-stop political lie that the audio tape is racist may take its place along side Joseph Goebbels photo as an example of a big lie which a nation came to accept as truth.

Karen Bass Knows the Tape Had Been Illegally Made

Not only does Karen Bass know that the tape had been illegally made, but she also knows that its release was a dirty political trick.  Dirty Tricks were behind Watergate; the burglars were looking for material to use against Nixon’s political opponents.  Karen Bass may not have initially known which individuals were behind the tape’s release during the political campaigns for mayor and council district13.  If, however, Karen Bass does not know the answers to these questions by this time, then she does not want to know.  The term for this type of official ignorance“plausible deniability,” developed during the Reagan era.

Is it Obstruction of Justice for the Mayor Bass to Truncate a Criminal Investigation and/or an Arrest?

Since the LAPD is controlled by the Police Commission and the Chief’s term is up, Mayor Bass’ interference in the investigation of the tape’s aftermath would constitute obstruction of justice.  If the LAPD arrests whoever illegally made the tape, then that person is likely to disclose the identities of the persons who released the tape to the press and promoted the false story that it was racist. They may even have additional evidence of threats and blackmail by political leaders. Thus, closing down the LAPD investigation of the criminal taping cuts short political revelations which Mayor Bass may find uncomfortable, especially in light of who has been making political hay from L.A.’s Big Lie #2. (LA has a housing shortage is Big Lie #1.)

Even after the video conclusively and unambiguously showed that Jason Reedy and his group accosted Kevin de Leon at the Children’s Christmas party, followed Kevin de Leon as he attempted to avoid a confrontation by leaving, and Jason Reedy blocked Kevin de Leon from leaving and then head butted Kevin de Leon, the media reported that Kevin attacked Reedy.  Some media slightly backtracked and called it an “altercation” between the two, which was misleading since Reedy physically attacked Kevin who only defended himself and took no aggressive action. Video

Since the LAPD has not yet arrested Jason Reedy, the ball is in Mayor Bass’s court to prove that she has not obstructed justice by protecting Jason Reedy from arrest.  Who else has such power over Chief Moore?  Is Mayor Bass exercising her influence via some proxy so she may have plausible deniability? Is her proxy willing to sacrifice his entire career, good name and reputation because the Mayor does not want her political allies to be embarrassed?

Will Los Angeles eventually find out that there have been a gaggle of bagmen scurrying about Los Angeles, alternately handing out political goodies and/or issuing political threats in order to obstruct justice? Will it turn out that Kevin de Leon is on someone’s enemies hit list like Richard Nixon had?  Who can guarantee Mayor Bass that Los Angeles does not have a John Dean or a Mark Felt? Those who lived through Watergate will recall that the obstruction of justice took a long time to be uncovered, but despite President Nixon’s efforts, the obstruction backfired.  (Wikipedia) The other lesson which Mayor Bass should heed is that the cover-up is worse than the crime.

It’s pretty clear what Mayor Bass knows and when she knew it. The issue becomes, “Why is Mayor Bass blaming the victim and protecting the criminals?”