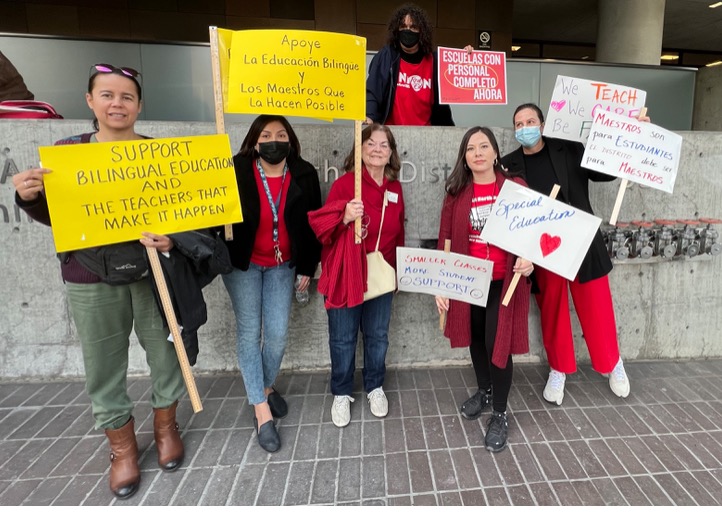 EDUCATORS - Did you hear that a well-attended protest this week by L.A. teachers for improved pay featured parents who spoke out to support them?

If not, you’re in the same boat as readers of the L.A. Times, the news outlet of record on issues of governance and economics in our metropolis. Coverage of three rallies by LAUSD educators along with vocal allies earned front-page, above-the-fold placement in the Times’ print edition Tuesday.

Yet the article dispensed with the abundant solidarity from the community in just 5 words: “The rallies included parent supporters.” Then Times education reporter Howard Blume went out of his way to quote a parent who had nothing to do with and did not attend the protests. That parent voiced antagonism towards LAUSD teachers and doubts about the survival of the local public education system. Both are consistent themes of the Times’ coverage of L.A. schools.

The chronically anti-teacher, funereal coverage of LAUSD by Blume and colleagues begs the question why the Times doesn’t simply put their articles in the Obituary section.

Why are parent or community voices friendly to teachers excluded from Times reporting? Why are priorities of educators routinely framed as self-serving, instead of highlighting their potential benefits to students? Why does constant, Debbie-Downer emphasis of financial woes in the nation’s second largest public school district sideline consideration in Times coverage of goals by educators, such as reducing or redirecting school police staff, that could actually save LAUSD money?

It’s worth noting the article about the rallies actually did mention, but failed to quote, a parent sympathetic to the economic squeeze facing teachers. Dr. Rocío Rivas, however, was not identified as mom of a current LAUSD student, or as a parent who is herself a renter, much less as a single-parent working mom of a 7th-grader who endures firsthand the stress of housing, food, and necessities in this costly urban market.

Instead Dr. Rivas was characterized disparagingly as a “newly elected school board member” who “benefited from a multi-million-dollar independent campaign on her behalf from the teachers union.”

Omitted was the essential context that big spenders Reed Hastings and Bill Bloomfield and other promoters of charter schools doubled the union’s spending to push Rivas’ opponent, including a blitz of attack mailers against Rivas.

That union support helped Rivas in withstanding the storm of outside money by charter-school advocates could have clarified.

Instead, the reporting created the impression the incoming board member is unduly beholden to a single, entrenched, self-interested entity. This stereotype for any ally of local teachers has become one the Times seems happy to reinforce at each possible opportunity.

But it’s not simply the selective, pejorative treatment of teachers and allies of educators that has become commonplace for Times reporting on public schools in L.A. It’s also the reliance on a small cadre of sources for Times education articles whose own biases, conflicts of interest, and even campaign contributions to school board candidates go undisclosed.

Two sources quoted in a Nov. 23 Times article about outcomes in L.A. school board contests, again by reporter Howard Blume, are not the disinterested observers that readers were led to presume by the failure to report key information about the sources.

Dan Schnur, a USC professor who assessed the election results in District 6 where Board Member Kelly Gonez narrowly came out on top, donated $250 this summer to Gonez’ 2022 campaign, according to official disclosures in L.A. City Ethics records.

Likewise, Pedro Noguera, a USC dean, whose quote suggested that District 2 winner Dr. Rivas might be “more compliant” with the teachers union, actually donated $250 to the campaign of Rivas’ opponent earlier this year, as official disclosure data reveal.

This information missing from the article is something readers deserve to know in evaluating the insights of sources who comment on school governance.

For years, some L.A. Times readers have noted that coverage of L.A. school policy and politics in the newspaper often leans against LAUSD educators and their allies on the board.

Providing readers full disclosure of sources’ potential interests on campaigns they discuss is one important way to achieve fairness and regain credibility.

More than a decade of evidence makes a definitive case: Local news coverage, or its absence, shapes civic engagement.

What residents and voters read, or don’t read, or absorb between the lines through reinforced stereotypes, can determine whether and even how they cast ballots — or where they enroll students to learn.

The Times owes its readers and Angelenos a self-critical reckoning with its pronounced bias against teachers and teacher allies in its education coverage. Such a vital, enduring news outlet cannot profess to champion critical thinking, public integrity, and protection of democracy in our county, California, and our country while distorting the depiction of an institution pivotal to nurturing exactly those values, L.A.‘s public schools.

(Hans Johnson is president of the East Area Progressive Democrats (EAPD), the largest grassroots Democratic club in L.A. County and in California. The openly gay son of a teacher and a school board member, he has spearheaded advocacy for funding public education; fact-based health and sexuality instruction free of censorship; language access for limited English proficient and deaf and deaf-blind stakeholders; stricter accountability of charter schools; and transparency in governance at the local, state, and federal levels. He lives in Los Angeles.)  Photo above: Bilingual educators rally at LAUSD headquarters Dec. 5 as part of the rallies by L.A. educators and allies to improve pay.