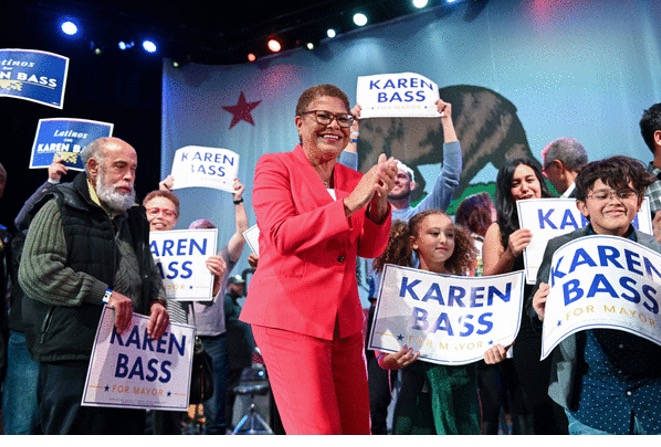 THE EASTSIDER - The votes are in and counted and the winner has been declared in the race for Mayor of Los Angeles.

It is not the man who invested millions upon millions of dollars of his own money to win the election, but the Congresswoman who raised along with matching funds from the city over $12 million dollars to become the 43rd Mayor of Los Angeles.  Karen Bass will be the first woman in the city’s history to become Mayor.  With a strong connection to community over many years and a record as an experienced state and federal elected official, Mayor Bass should be able to navigate the process and hopefully turn Los Angeles around from the current problems associated with increasing crime, homeless and affordable housing to a more positive place and live up to the long-standing title…“City of the Angels.”

If you recall, Mayor Garcetti had an agenda to create a Safe, Livable and Prosperous City of the Angels during his eight years as the Mayor of Los Angeles.  Unfortunately, if we examine the facts that did not happen.  The city has a reduced number of police officers and civilian personnel.  Crime continues to rise to higher levels month by month.

The homeless environment has continued to grow and spread to most if not all neighborhoods throughout Los Angeles.  From the inner city to the West and East Sides of Los Angeles into the San Fernando Valley and down the 110 freeway to San Pedro.  It has spread and continues to grow day by day.  People living in squalor on the streets throughout commercial and residential neighborhoods of Los Angeles has been a constant reminder of the failed leadership of Los Angles elected officials.  You can only ignore a situation for so long.  I believe both Los Angeles residents and business owners are out of patience with the homeless population and will become much more aggressive in the days and months to come. The time to finally address this situation with effective programs is long overdue.

Governor Newsom recently announced that he is releasing $1 billion dollars in state homeless funding that was put on pause due to lack of local government action.  This amount will help increase funding to address homeless in Los Angeles.

Additionally, the L.A. voters approved Measure ULA which provides a 4% tax on ALL properties sold above $5 million to $10 million.  A 5.5% tax is also assessed on property sold for $10 million and above.  The funds are to be used to address Homeless in Los Angeles.

The City Controller has reported that spending of $837,000 to house a single person has not worked to remedy the situation.  The $1.2 billion program to build housing for homeless is moving too slow and not improving to address the homeless population.  Only about 1,200 housing units have been completed since voters approved the spending plan in 2016.  It is estimated that over 41,000 people are homeless and living on the sidewalks and streets in the City of Los Angeles.  You can see the desperate situation everywhere you turn.  It has become so prevalent and common that most times we just look and move along on our journey.

The following crimes are all in the plus category.

Look for exciting times to begin at the L.A. City Council meetings with the newly elected councilmembers.

The newly elected progressive L.A. City Council members will surely add a new dimension to the council meetings and committee hearings.  Stay tuned for new and interesting concepts generating from City Hall.  Only time will tell if it will be a benefit for the residents and business owners of Los Angeles.

As we come together to enjoy the holidays, I found a restaurant that takes me back to my youth living in Hollywood.  There was an Italian restaurant that has closed after serving the city for nearly 60 years.  The name of the place was Andre’s Italian Restaurant.  It was on Third Street cross from the Farmer’s Market.  The property is being demolished for a new development.  Long gone is the Great Italian Food served cafeteria style.  Well….I found a duplicate in Canoga Park along Sherman Way.  It is called Grandi Italiani Family Restaurant.  Aron Celnik was one of the main members of Andre’s opened Grandi Italiani.  The same recipes and menu items from many years ago.  Delicious Italian Food cafeteria style.

If you are interested in Great Italian Food at a reasonable price, try it out. Grandi Italiani at 21730 Sherman Way in Canoga Park.

(Dennis P. Zine is the author of RantZ and RaveZ.  The column is published twice a month to enlighten you on issues impacting Los Angeles and your community.  Dennis is a 54-year member of law enforcement and a retired elected public official.)