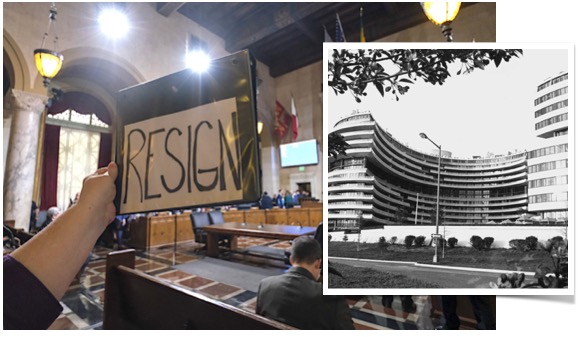 THE VIEW FROM HERE - Shortly before 2:00 a.m. on June 17, 1972, Watergate security guard Frank Wills found paper stuffed into the doors to the garage levels B2 and B3. Upon investigation, he found a door to the Watergate office building taped open.

He called Washington D.C. police who nabbed the burglars. Watergate slowly crept upon the nation, until the audio tape with the missing 18 minutes exploded Watergate into the nation’s most notorious political scandal.

In contrast, on October 9, 2022, Los Angeles’ TapeGate burst upon the scene with the audio tape itself.  Instantaneously labeled as racist despite the fact it was not racist, its release was a bombshell during the mayoral race.  Because no one in the public had heard the tape or had ready access to it, virtually everyone believed the reports that the tape was racist.  A copy of the transcript is attached here.

A Lie Repeated a Thousands Times Becomes the Truth

The real story behind TapeGate may be why a non-racist tape was universally and immediately duped “racist” based on a few quotes, taken completely out of context, and used to smear three Mexican Councilmembers.  Not surprisingly, the most ardent promoter of the falsehood seems to be Pravda West, aka LA Times.  Since December 1881, LA Times has been dedicated to the care and feeding of Los Angeles’s elite.  Consistent with  its history of its false reporting of Zoot Suit Riots in 1943, the LA Times insists that the three Mexican councilmembers are racists.

We Angelenos Are the Victims

In addition to councilmembers Martinez, De Leon and Cedillo, all Angelenos are victims of the false narrative that the three are racist.  Materially false information results in unjust results.  Thus, the first order of business is for Angelenos to realized that we have been duped.

A disparaging remark about someone is not racist unless the speaker says that the person’s negative characteristic derives from their race, ethnicity, gender, etc.  The essential element of racism is assigning someone to a group and then treating them according to their group membership and not based on their individual character.  If a Black person calls Charles Mansion a murderer, that does not mean the Black person is anti-White.  The claim that all Whites, due to their light skin hue, are responsible for Blacks’ socio-economic situation is racist.

The woke left promotes Identity Politics by assigning individuals to some ferkata group and treating them according to that assignment ignoring individual character.  Mentioning someone’s race, ethnicity, etc., however, is not racist. In a nation where the government constantly asks us to identify to which group we belong, it is absurd to bitch when people use similar groupings.

After Reading the Actual Transcript, Certain Features Stand Out.

1) Nury Martinez swears more than a drunken sailor, e.g., she uses the F-word four times in one sentence (0:06-46) and maybe 90 times overall.  She loves “tough girls” (00:05:24-05:26). From the way she talks, I’d expect her to wear a motorcycle jacket to council meetings. None of this makes her a racist, but it is important for context of her comments.

2) They all have opinions about other people. Who doesn’t? People, who do bad things, do not evade criticism because their race, ethnicity, etc. is disclosed. As MLK said, judge a person by their character.

3) It is a fact that Los Angeles has political alliances based on race, ethnicity, etc.  Back in the late 1960's, one reason for proposed Beverly Hills Freeway run down Santa Monica Boulevard was to wipe out the incipient Gay business community between La Brea Avenue and Doheny Drive.  Although we Gays come in all colors, etc, the motive for the freeway’s route was clearly “racist.”  The term’s usage has expanded along with Identity Politics’ assigning everyone to a group so that they can claim discrimination and vote Dem.

1) When a reporter has the transcript and intentionally quotes the person out of context, he may lose the protection of New York Times Co. v. Sullivan, 376 U.S. 254 (1964).  That case shields a reporter’s false statements about a public figure from being the basis of a defamation lawsuit unless the reporter acted recklessly and maliciously. Also, his printed statements have to be presented as fact and not as probability, possibility or opinion. Careful parsing of out of context quotes can paint a completely false picture while each item is too ambiguous to be legally actionable.

2) Dems love to classify people by race and ethnicity.  In Los Angeles, the basic breakdown is Mexicans are about 36% and when added to others included under the rubric Hispanic, they are about 48% of Los Angeles and growing.  Blacks once were 18%, then declined to 8.8% and are probably down to 8.5% and declining. Asians are about 15.5% and Jews are 17.5%.  The city council has 15 members

The Dems Support the Notion of Proportional Representation

Proportional representation is wack but I don’t make the rules.  The 8% Blacks are entitled to one council seat, but have 3, making them 300% over represented.  Hispanics at 48% are entitled to 7 seats, but had only 3 and now have only one who may attend without risking another woker Jan 6th style attack on City Hall.  Thus, Hispanics are lacking 4 or more seats.  The 17.5% Jews are entitled to 3 seats (2.62) and have 2 (Koretz & Blumenfield). The 15.5% Asians have 2 seats (Raman and Lee both are in so-called White districts). BTW, de Leon is ½ Chinese and ½ Guatemalan. No one cares about Whites. Buscaino is a White ethnic, Italian. There are no WASPs, except Bonin who identifies as Gay, except maybe Mitch O’Farrell who identifies as Gay and Native American and is anti-Italian).

Life would be fairer if we dropped all this race-ethnicity crapola and judged people by character.  But, as long as Identity Politics plagues us, we have to deal with it.

The Truth and Lies About Los Tres Mexicanos

Nury Martinez [00:34:49] Yeah there are no. The kid is bouncing off the f-ing walls on the float, practically tipping it over. There's nothing you can do to control him. Parece changuito.

The LA Times’s October 9, 2022 article stated [Martinez] “described Councilman Mike Bonin’s son as ‘Parece changuito,’ or ‘like a monkey.’” Since four reporters appear in the by-line, David Zahniser, Julia Wick, Benjamin Oreskes, Dakota Smith, Gustavo Arellano, we do not know who included that falsehood.  In White culture, this deception is probative of malicious ill-will against Martinez.

The three councilmembers criticize and mock the way Bonin who is White treats his Black son.  When someone sees something, it is not racist to comment on it.  What is quite telling about the accuracy of their comments about Bonin is the way he subsequently repeats the lie that any of them said anything racist about the little boy.  They criticized how Bonin treated the kid, not the child himself. Yet,  Bonin has been emphasizing this bogus theme.  “No child should ever be subjected to such racist, mean and dehumanizing comments, especially from a public official. It is painful to know he will someday read these comments.”

The reality is that Bonin seems to parade around his son like token.  Their analogy to a plantation lawn jockey was descriptive of Bonin, not of the kid. In fact, even the kid’s unruly actions were attributed to Bonin’s poor parenting skills, not as some defect with the child himself.  The implication is that if este niño were reared in a Mexican household, he’d behave better in public.

Hypocrisy to the Nth Degree

The grandiose hypocrisy of the LA Times and of all of Los Angeles’ chattering glasses is despicable.  What idiot thinks that all councilmembers do not discuss their district’s composition during re-districting? What fool thinks that a district which is 78% Hispanic should not have Hispanic representation, (if one accepts the Dem proportional representation.)? BTW the final map K 2.5 had already been drawn.

Then, the ludicrous charge is made that their meeting violated The Brown Act, Gov’t Code §§ 54950 et seq. The Act forbids a majority of the council to meet on city business outside of council session. Three is not a majority of fifteen councilmembers.

“They Are Anti-Black” Is the Biggest Lie

In reality, all three supported and worked with all the Black councilmembers.  As the tape shows (starting at 0:30:10), Nury related a long conversation which she had with Danny Blackwell owner of LA Black newspaper, The Sentinel.  They all supported Heather Hutt, who is Black, for CD 10 replacement of Mark Ridley-Thomas and they are concerned about MRT’s legal predicament.  She told Blackwell that CM Marqueece Harris-Dawson should go after LAX and a take it away from that “little bitch Bonin.” (00:33:26) Their dislike of Bonin stems from his grandstanding about homelessness and doing nothing about it. (00:3201 thru 0:33:08) Kevin de Leon: “He [Bonin] talks so much shit about homelessness and he doesn't even fucking build anything.” (00:32:07)

Remember, the false accusation is that all three are so racist they cannot serve on the city council.  Talk about cancel culture! The name TapeGate applies because calling the tape “racist” is scandalous.