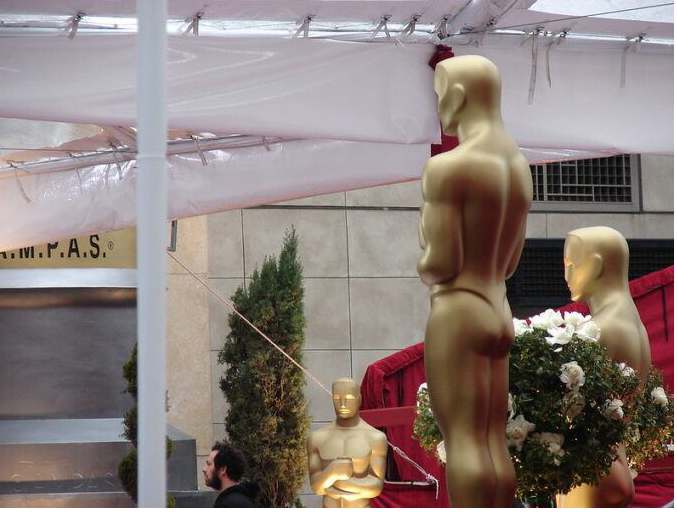 ENTERTAINMENT WATCH - If ever there were steps of power that need storming by an angry mob, they are those of the Dolby Theatre on Hollywood Boulevard on Oscars Night.

Truth be told, I don’t know if the place has steps, but if not, then the storming will be that much easier—if less cinematic.

Back at the 2017 Academy Awards a supposedly unsuspecting busload of tourists was ushered into that same auditorium thinking they were being guided around the usual Tinsel Town sights. Suddenly visitors found themselves—as if in a dream or nightmare—amongst the movie gods and goddesses. Denzel Washington even officiated an impromptu wedding for an awestruck couple.

These representatives of Middle America were likely all trained actors, but whatever their credentials, their appearance in the Oscar broadcast did little to bolster either ratings or any connection between the movie moguls and the plain and trusting folk of the Heartland, that is, the people meant to worship the stars and pay their salaries at the box office or, increasingly, through streaming service subscriptions.

Five years on in Oscar Land, put those same leisurewear-clad visitors to the Capitol of Cinema in skins and camo and watch them be the ones to do the surprising. Action! The decked-out celebs would hit the deck—duck and cover or ditch their high heels and race for the exits only to find them barred. One sees a Tarantino picture (Inglorious Basterds), but yearns for Buñuel (Exterminating Angel).

Whoever the director, that scenario would certainly make for better television than what Sunday night’s show served up.

I’ve never been to the Dolby in Hollywood. The crass retro-styling of its architecture hearkens back, it is said, to Hollywood’s Golden Age.  Built in the late 1990s it was initially christened the Kodak Theatre, manufacturer of the film stock of legends and a storied name in the annals of American capitalism and technological innovation.

I have, however, been to Kodak Park in Rochester, New York, a cluster of desolate in vast sea of cracking asphalt. Even California’s golden light and the most forgiving celluloid couldn’t impart a nostalgic glow to these endless wastes of capitalist desertification.  By now the company’s workforce has been slashed by about ninety percent, down from a high of some 60,000.  Renamed the Eastman Business Park and in largely futile search of new tenants, the Technicolor fairy tale has ended.  Out on the Left Coast one suspects an even more biblical fate for Babylon:  earthquakes, floods, and fires, and, worst of all, irrelevance.

Kodak went bankrupt ten years ago, and Dolby dubbed its own brand on the building that hosts Hollywood’s biggest night.

The renaming took on symbolic resonance on Sunday. Troy Kotsur became the first deaf actor to win an Oscar, awarded for his supporting performance in the heartstring-plucker, Coda about a musical teenager born into a family unable to hear her. No music played from the orchestra pit to curtail Kotsur’s heartfelt speech as it stretched beyond its allotted time.  The message was more than symbolic: it’s better not to listen to Hollywood’s cues even if you can. The audience signed their applause.

That silence thundered retrospectively when the same audience gave a rousing ovation to Will Smith for his Best Actor Oscar immediately after he’d delivered a resounding slap to the cheek of Chris Rock for a tepid and insensitive joke about his wife’s hair. How much more powerful—and cinematic—that silence would have been had it reigned when Leading Maniac Smith hoisted the statue and stuttered his way into an unhinged defense of his instincts for “protection.”

Yet the most egregious and dispiriting use of sound came with the award for Best Song.  The category itself is a silly legacy of early cinema’s kinship with the nineteenth-century musical hall and vaudeville.  It stays in the roster of prizes because the performances of the songs on Oscar night relieve the numbing succession of speeches and related foolishness.

With the Evil Empire once again threatening the globe the winning song had to come from Broccoli’s Bond.

Rami Malek, who played the bad guy in the latest installment No Time Die, introduced the number from the floor of the Dolby, walking among the star-studded booths and telling the camera and the world that the Bond films are an “indelible part of our cinematic experience.” Sadly, he’s right.

The camera panned up to the stage where Eilish was swathed in a thick dark gown that matched the color of her hair.  Her brother and with her co-writer of the latest, eponymous Bond song, Finneas O’Connell (who goes by FINNEAS, all caps!) accompanied at the piano.  An orchestra silhouetted at the back of the stage stoked the portentousness of the affair, what with specter of annihilation rising out of Russia. The inane paradox of the song asserts that “there is no time to die,” and perhaps there isn’t for Eilish given her clogged schedule of carbon-spewing world tours to save the environment and that infamous appearance to sing “My Future” at the 2020 Democratic Convention, not to mention gigs like the Oscars themselves.

At urgent moments of the melancholic ballad Finneas, I mean FINNEAS, added vocal harmonies, as Eileish sat enthroned on a Manilow stool nearby, laser-like matrices of high-tech light scanning past her.  Even if heavily miked and modified, the acoustic performance with a real grand pian and real violins projected not only Bondian classiness but moral fortitude against the techno-threats from the bad guys in the Kremlin.

It was alarming, indeed frightening, how the sibling pair, both born well after the fall of the Iron Curtain, had shackled themselves to Bondage.  Above wistful minor harmonies, a vaguely exoticized melody of simple contour conjured far-flung Condé-Nast destinations that make alluring backdrops for 007’s beddings and swashbucklings. The music lies limp, ready to be ravished by the ideology of Hollywood and its most potent franchise, born in the Cold War and now ready for a Hot One. Eilish tries to smolder but only emits a humid readiness to give herself into the machine. “Was it obvious to everybody else / That I’d fallen for a lie?” she sings as the strings waft above.

You didn’t have to hear a single note to know that she had.

When Eilish returned to the stage later with her brother to receive the Oscar that was a foregone conclusion, she was overwhelmed. As at the DNC, speech does not become her, at least not in the presence of the powerful.

The few Trumpians who might have tuned in to the show to see what their enemies were up to would have heard a different lie, a bigger lie than the one Eilish thought she was singing about …

What goes on inside the Dolby on Awards night is enough to stoke thoughts of destruction, whether you work for SPECTER or not.  Fill the place with stars and industry operators and you have the recipe for revolution. The opportunistic identity politics and hypocritical political postures have long alienated, indeed infuriated, the land between the coasts.

Just as the institutions of government creak and teeter, so too the pillars of celebrity culture and its rituals of self-aggrandizement come ever closer to crashing and burning

Even a bigger wimp than Will Smith could kick the Oscars past its tipping point.

DAVID YEARSLEY is a long-time contributor to CounterPunch and the Anderson Valley Advertiser. His latest book is Sex, Death, and Minuets: Anna Magdalena Bach and Her Musical Notebooks. He can be reached at  dgyearsley@gmail.com