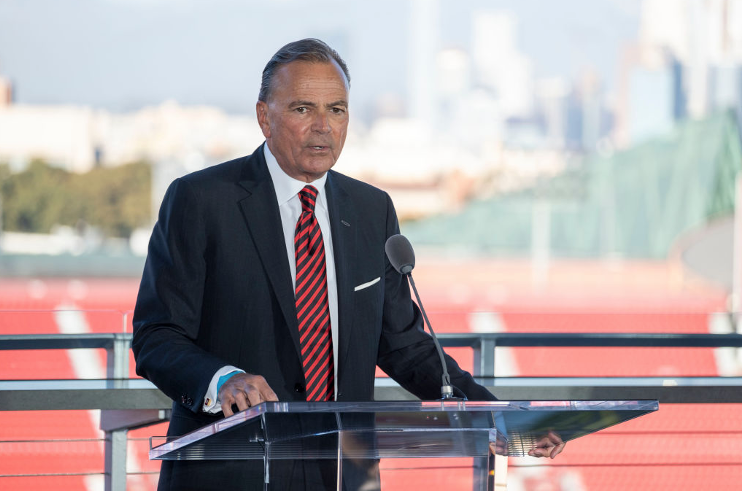 He was even worse than Antonio Villaraigosa, who basically abdicated his role to then Council President Garcetti while Tony spent his time skirt chasing.  To recapitulate how LA operates in case anyone has not been paying attention for the prior 20 years. LA City Council is a criminal enterprise which operates by a vote trading system where each councilmember trades his yes vote and in return gets yes votes from every other councilmember for any project he puts on the city council agenda.  Penal Code § 86 was restated in 2006 to emphasize that this type of vote trading is illegal and carries a maximum four year prison sentence for each traded vote.

Originally, this vote trading system was great for developers as they only had to bribe one councilmember and pay off the mayor with a donation to Garcetti’s Mayor’s Fund in order to get unanimous approval of any project no matter how atrocious it may be and no matter how many poor people were thrown onto the streets to suffer and die.  When Councilmembers Huizar and Englander tried to modify the vote trading system by demanding extra bribes in order to get projects through the PLUM Committee, the FBI stepped in to protect the overall vote trading system.  November 10, 2018, CityWatch, The FBI Seeks…But Will Not Find, by Richard Lee Abrams

One wrinkle in the Vote Trading System is that developers did not want to build evenly throughout Los Angeles.  They had bought property in a few locations, e.g. DTLA.  Thus, councilmembers in the boonies were getting bupkis. In 2016 The LA Times, while still run from Chicago, ran a story how the bribes were being spread around, significantly increasing the cost of projects.    October 30, 2016, LA Times, A $72-million Apartment Project. Top Politicians. Unlikely Donors,  Who Wrote the Checks to Elected Officials Weighing Approval?, by David Zahniser and Emily Alpert Reyes

Here is a list of more than 100 donors connected to the Sea Breeze project, and this is only the “above ground” donations and does not cover contributions through off shore bank accounts and other favors.

Rick Caruso was no stranger to the political donations game. Caruso gave $125,000 to Garcetti’s Mayors Fund, and in 2016, his companies gave $200,000 to the campaign for Garcetti’s Measure M.  The simple one bribe per project formula under the Vote Trading System was in danger as the politicos were seeking more and more money.  In 2015 and 2016, San Fernando Valley developer Westfield Corp contributed $950,000 to two Garcetti initiatives — Measure M and the effort to bring the 2024 Olympics to Los Angeles by David Zahniser

The FBI Rides to the Rescue

Paying for tax increases which would then be funneled back to the developers was one thing, but being forced to pay bribes to Councilmember Mitch Englander District 12 in the San Fernando Valley for a project in South Bay after the developer already was paying hundreds of thousands to the councilmembers for the Sea Breeze district!?!  That’s a financial outrage!  It violated the premise of the Vote Trading System -- One Project One Bribe!

Caruso’s plan is time honored and has been used throughout history. He will dissolve parliament and assume dictatorial powers by declaring an emergency.

“Billionaire developer Rick Caruso said Monday that if elected mayor of Los Angeles, he would take power over homelessness policy away from the City Council and concentrate it in his office.” ¶ “Day one, I’m going to declare a state of emergency, take the authority in the mayor’s office, and I’m going to be held accountable for it,” Caruso said. “What we can’t do any more is allow 15 council people to decide how homelessness is handled in each of their council districts.”  ¶¶ “We’re sorely short of housing. But you’ve gotta take it away from a political process.” February 15, 2022, VARIETY,  Rick Caruso Wants to Expand L.A. Mayor’s Powers on Homelessness, by Gene Maddaus

For Some Reason, Dictators-in-the-making Publish Their Totalitarian Plans in Advance

Let’s be clear what Caruso proposes.  He will suspend LA’s legislative branch (i.e. the city council) and assume all power over development on the pretext of a homeless crisis.  Even Trump did not attempt to suspend Congress to construct his ferkata Wall based on an immigration emergency.

“As a developer, Caruso also said he brings a unique perspective to dealing with the city’s planning bureaucracy. He said he wants to expand housing development “by right” — that is, without discretionary city approvals — across the city, and across all income levels.”

You know what this means?  By expanding “by right” construction, then no developer need bribe the councilmember in whose district he wishes to construct some horrid, oversized project.  The only person the developer will have to satisfy is Il Duce Caruso.

Caruso also plans to criminalize homelessness in order to conduct sweeps to clear the sidewalks.  Il Duce expounded, as dictators are wont to do.

“You have to start and say we’re not going to allow people to live on the street, in encampments,” he said. “We’re just not going to allow it. Right now we’re servicing people living on the streets. We’re encouraging it in many ways.”   He said his plan would rely heavily on temporary housing, moving 30,000 people into temporary shelter in his first year in office.   Did I mention he plans to greatly expand the LAPD by adding 1,500 cops?   February 15, 2022, KCAL CBS News,  Mayoral Candidate Rick Caruso Calls For 1,500 More LAPD Officers

Really? Just how does Il Duce plan not to allow people to be homeless? Just how does he plan to encourage their move to his temporary housing?  Oh yeah the extra 1,500 police.  What could go wrong with that?

“We’re sorely short of housing. But you’ve gotta take it away from a political process”

You know what “take it away from the political process” means? It means a coup to overthrow the government.  Extreme corruption often precedes a coup where the authoritarians assume control, which is the recent pattern in Afghanistan.  It’s how Fidel Castro came to power in Cuba.  One has to admit that a coup to overthrow a city government is novel.

The more dangerous part is that the California judicial system is sufficiently corrupt to support Il Duce. The judges are all the more vulnerable after the Girardi Scandal what with the judicial sex-acapdes tapes. It’s like a game Button Button Whose Got the Button?, but only with video tapes of members of LA judiciary having a good time on Girardi’s dime.