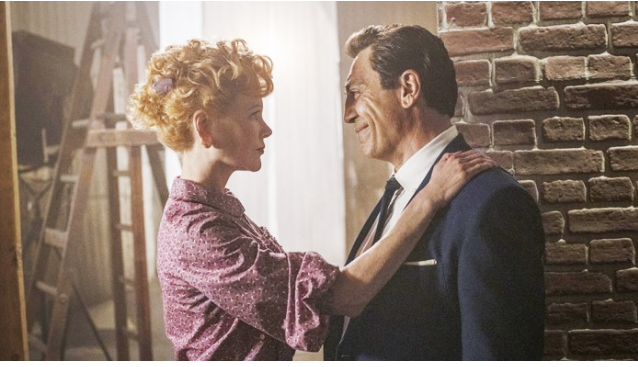 FILM REVIEW - Even as a kid I never found I Love Lucy funny (that I nonetheless watched hours upon hours of it says nothing good about my childhood);

and as an adult my tastes carried me even further away from caring about lowbrow antics of “America’s Favorite Redhead.” So needless to say, despite the undeniable impact Lucille Ball and Desi Arnaz had on the medium of television, I was hardly clamoring for a film about them.

But neither was I interested in Liberace or Judy Garland or Miracle Mop® inventor Joy Mangano, yet all three were subjects of films that are part of a current Golden Age of Biopics, where filmmakers regularly go beyond the serviceable dramatization that typified those of the 20th century (Gandhi is a quality example) to produce a substantial work of art in its own right, one that transcends the facts of a life.

Considering how many times Aaron Sorkin has worked this sort of magic on real-life subjects — he penned The Social Network, Moneyball, and Steve Jobs, as well directing his own screenplays for Molly’s Game and The Trial of the Chicago 7), it would have been surprising if Being the Ricardos didn’t make the list. But it’s classic Sorkin, another case where the man manages to elevate the real to the realm of the sublime.

Much as he did with Steve Jobs, for Being the Ricardos Sorkin has come up with a particularly clever narrative structure: a fictional set of retrospective interviews with three of I Love Lucy’s creative team, all of whom were part of a week of episode prep time (broken up into daily segments — MONDAY – Table Read, TUESDAY – Blocking Rehearsal, etc. — leading up to a live taping) during which Ball (Nicole Kidman) is a) publicly accused of being a communist (remember, this is during the ‘50s Red Scare); b) has to contend with a gossip column documenting Arnaz’s (Javier Bardem) philandering; and c) is newly pregnant, a turn of events that presents a problem for both I Love Lucy’s TV network and chief advertiser.

From the interview clips, Sorkin finds natural jumping-off points for various flashbacks (how Lucy and Desi met, how their careers seemingly plateaued in the 1940s, how I Love Lucy came to be), thereby steadily accumulating all the data we need to fully contextualize the week we’re following — which itself is a nice twist on the “ticking clock” convention. “It’s 6-to-5 and pick ‘em we’ve already done the last episode of this show,” Arnaz says the day after the Walter Winchell radio broadcast painting Lucy as a Red. “[…] Lucy’s whole career — and mine, too — may have ended last night. And we just don’t know yet.”

The casting is miraculous. Kidman disappears as Ball’s on-camera alter ego (even though she has not put on any weight for the role to make herself a closer physical match). And though we do get a better view of Kidman when playing the offscreen Lucy (if for no other reason than we’ve got no experience as a fly on the wall in the bedrooms and dressing rooms where the real live woman fucked and fought and fretted), she creates a character whose intelligence and wit is equally apparent in both her repartee and as the wheels of thought spin beneath the surface. Even in our topsy-turvy world, Kidman seems a shoo-in for Best Actress. A remarkable performance.

While Bardem never quite disappears in the same way, everything he is able to do makes this a non-issue. Although we don’t get quite the same intimacy as we do with Ball (the Academy may nominate him for Best Actor, but there’s only one true lead in this film), his combination of surface charm and obvious intellect make it clear that Arnaz and Ball are an equal match, smart and savvy and locked in the throes of deep attraction and love, creating an intimate rhythm that flows no less at home or meeting with lawyers than when they’re on the soundstage.

As William Frawley and Vivian Vance (a.k.a. Fred & Ethel), J.K. Simmons and Nina Ariana are fantastic, with Simmons at times becoming Frawley. And however much Being the Ricardos is not about the Mertzes or the I Love Lucy staff, Sorkin imbues each character with a full measure of humanity, with their own motivations and struggles, their own unique connections and interactions with the others around them.

Of course, in Sorkinland everyone is a bit cleverer and more fluid than in our real world of stammers and incomplete thoughts and never quite saying just what we want to say, with even minor characters partaking in Sorkin’s trademark repartee. But you don’t go to Sorkin for verisimilitude. If he gets to truth, it’s the sort that only art can distill, broader and deeper than any to be found in even the most meticulous litany of mere facts — truth as in what it’s like to be in love, or to be betrayed, or to be lost on a quest to arrive at a home that simply does not exist.

That is the beating heart of Being the Ricardos. For all her professional success (think the TV equivalent of early-period Beatles), what she has always wanted most is the simple domestic tranquility that has eluded her. Whether or not this was true of the real Lucille Ball (maybe she says so in interviews or biographies I’m never going to read), ultimately Being the Ricardos is a fable, which the fictional Lucy herself articulates to Vance and Frawley on set at 2 a.m. as she tries to perfect a bit of slapstick:

You know, I did this show so Desi and I could be together. I had no idea it was going to be a hit. I just thought, “Wow, the Construction Department’s gonna build us a little apartment, and that’s where we’ll live most of the time,” you know? And it worked out. This is where…. (Pause) It’s like a story you’d read a little girl: a witch puts a curse on a woman. She’ll be adored by the man she loves, but only as long as she stays on this magic ground. (Pause) It’s still a lot more than most people get.

Except for a few minor continuity problems and one notable editing glitch, Sorkin qua director delivers the technical goods, staying within himself while making subtle but strong choices (e.g., varying lens and color palette to visually demarcate time periods). He may never distinguish himself behind the camera as even a minor master like David Fincher or Danny Boyle, but he’s more than able to effectively service his masterful screenplays.

Aaron Sorkin is not like a box of chocolates: you always know what you’re gonna get. So if you don’t dig his previous work, no point in sampling this one. But otherwise, Being the Ricardos is brilliant enough to love even if you don’t love Lucy.

(Greggory Moore’s work has appeared in the Los Angeles Times, the OC Weekly, The District Weekly, the Long Beach Post, Daily Kos, and GreaterLongBeach.com and Random Lengths News where this was first published. For more: greggorymoore.com.)