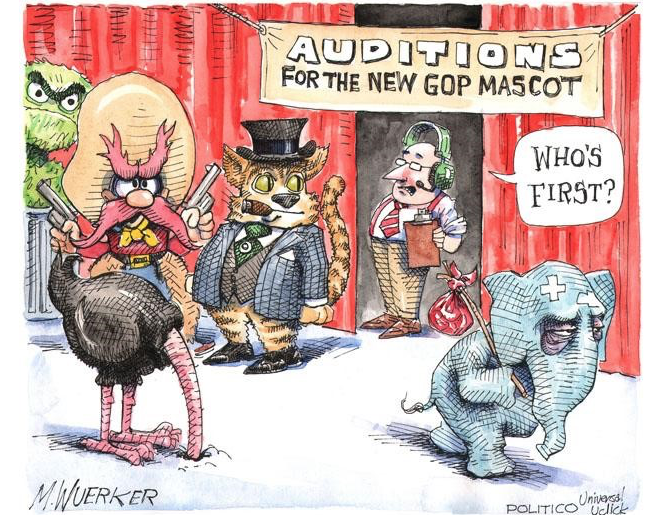 AT LENGTH-The Arizona recount is over eight months after it started, and bizarrely enough, the ex-president lost by even a larger margin with the advantage going to President Joe Biden.

This however hasn’t stopped Don-the-Grifter from continuing the Big Lie campaign and mustering the gall to say, “this proves there was fraud!” This coming from a man who knows less about how the government actually works than anyone who has ever been president.

In the words of the auditors themselves: “[T]here were no substantial differences between the hand count of the ballots provided and the official canvass results for the county.” This is an important finding because the paper ballots are the best evidence of voter intent and there is no reliable evidence that the paper ballots were altered to any material degree. “In fact, the Cyber Ninjas-led team found Biden’s margin of victory in Maricopa County was 360 votes wider than the official canvass had been.”

If you doubt this assessment of Trump’s character, demeanor, or sheer incompetence, one only has to read a growing number of insider books on the guy who notoriously exclaimed, “Only I can fix it!”

The only things he actually fixed was stacking the Supreme Court and the tax code giving lower taxes to the ultra-wealthy, both of which would never have been accomplished without “Moscow” Mitch McConnell, the Republican leader of the Senate. Here’s just the short list of a few books that will leave you perplexed on the four years of DJT:

Even more curious is that Trump was actually interviewed for all of these books. He’s spoken frequently with many members of the press that he continues to attack as “fake news” and even with those like Bob Woodward and Robert Costa, whose just released book, Peril, is reported to contain several “bombshells” on the ex-president’s last days in office. Peril is the third book about the Trump presidency that Woodward has written.

What we are now witnessing is not really about Trump attempting a “comeback” in 2024, but a “vengeance campaign” against his perceived enemies.  As much as we’d all like to forget about him, he’s still the most dangerous threat to our democracy since Jefferson Davis led the Confederacy, or Sen. Joseph McCarthy created the Blacklists in 1950 to ‘54.

In a surprise article in the National Geographic Magazine of Sept. 22, a publication more often associated with fantastic photos of faraway places and exotic cultures, Victoria  Jaggard: SCIENCE executive editor, took on the prevalence of disinformation about COVID-19. She writes, “There’s no shortage of misinformation out there about the coronavirus, and some of the most pernicious claims swirl around vaccines and fertility.”

Clearly, she is referring to Nicki Minaj, the Trinidadian-born rapper, singer and songwriter who recently tweeted to her 15 million followers that “My cousin in Trinidad won’t get the vaccine cuz his friend got it & became impotent. His testicles become swollen. His friend was weeks away from getting married, now the girl called off the wedding.”

There is no credible scientific evidence that any of the COVID-19 vaccines cause impotence. Jaggard continues, “However, there is now a wealth of data that shows getting infected with this virus can cause erectile dysfunction and other reproductive health problems for men.”

You may have missed this Minaj-á-Twitter flap now suggestively called “ballgate” but it is still floating around in the viral universe of disinformation and believed by those not prone to reading National Geographic magazine. Kind of like the news results of the Arizona election recount. Trump lost the Cyber Ninja’s recount but still claims he won! One might ask if Trump will be able to get it up again?

So as the virus continues to spread through the red states amongst the least vaccinated, and Republican governors continue to deny that their states’ hospitals are overflowing with COVID patients, Republicans may have yet another demographic challenge — their Proud Boys and militias may not be able to reproduce after the pandemic — receiving a dose of their own ignorance of the medicine. As I have said before, the pandemic may do for the Democrats what they hesitate to do in protecting themselves against the Republican attack on the vote — leveling the playing field.

One might only hope that Congress invokes the 14th Amendment which prohibits anyone who has violated their oath of office, by engaging in insurrection or aiding in a rebellion, from running for a federal office. When the truth comes to be known, this is what needs to be done.

Neo-Fascist Challenge: A War Against Blacks and People of Color

What Are We Doing? Why Are We Here?

Why Is Housing So Expensive In Los Angeles?