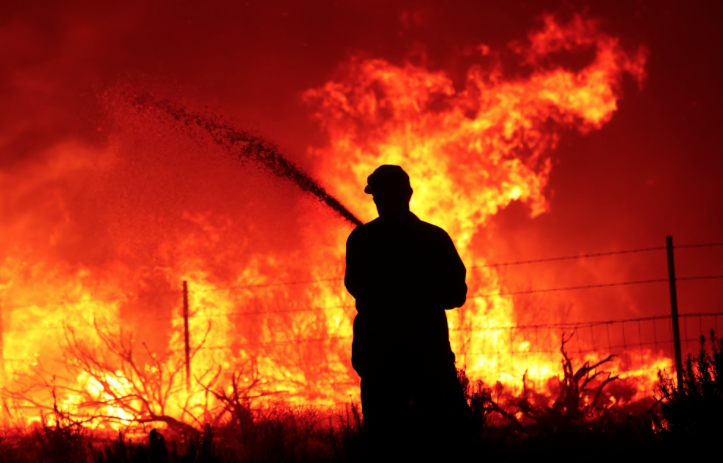 THE FIRE FIGHT - As large chunks of the Western U.S. burned over the summer, lawmakers in Washington quietly inserted measures into the massive infrastructure package that they hope can be almost as potent as water in fighting them: cash.

The $1 trillion infrastructure bill the Senate passed this month included $600 million to raise the pay of federally employed firefighters and to create 1,000 more federal firefighting jobs.

Experts say the funds are sorely needed to build a larger, better compensated force to fight fires that, because of climate change, will worsen in the coming years. At the same time, they say, it’s not nearly enough to tackle the intensifying infernos.

“All the research we have shows this is going to be a century-long problem. That absolutely presents the dilemma that the measures in the Senate infrastructure bill, while nothing to sneeze at, are really nowhere close to enough,” said a wildfire policy expert, Char Miller, a professor of environmental analysis at Pomona College.

The bill, which still must be passed by the House and signed by President Joe Biden to become law, would allow the Agriculture and Interior departments — which oversee the two largest federal firefighting forces (one within the U.S. Forest Service and one within the Bureau of Land Management) — to switch 1,000 seasonal, contract firefighting jobs without benefits to full-time positions that offer benefits.

The bill would also raise pay for the firefighter jobs in the Forest Service and the Bureau of Land Management by, on average, $20,000. In California, federal firefighter salaries start around $28,000, compared to about $66,000 for state firefighters.

In addition, the bill would order the Agriculture and Interior departments to work with the Office of Personnel Management to begin reclassifying job descriptions for most federal firefighters, which could further raise pay for those jobs. The federal government would create a civil service job classification of wildland firefighters for those identified as forestry technicians.

“Supporting our brave firefighters with pay, benefits and career opportunities that reflect the importance and danger of the work that they do is critical to facing the mounting wildfire threat,” Agriculture Secretary Tom Vilsack said in a statement last week.

Seven firefighters died fighting wildfires in 2019, the most recent year for which complete data are available, according to federal data.

The additional funding would be a boon to California, in particular, where the vast majority of wildfires have burned this year and in years past.

In California and other states across the West, wildfires are fought by a combination of crews from the federal, state and county levels. The command centers can shift from jurisdiction to jurisdiction, based on where a fire is burning at any one time, but the majority of firefighters during the region’s increasingly long “fire season” are employed at the federal level, experts said. Because nearly all wildfires in California start — and expand — on national forestlands, Forest Service firefighters are most often the first and most plentiful crews on the scene.

NBC News reported this month that certain squads of federal firefighters and related teams had been instructed to bring their own personal stashes of food, water and other supplies to last them three days.

In California, where efforts by federal crews are augmented by the state’s Department of Forestry and Fire Protection, known as Cal Fire, the Forest Service has scrambled in recent weeks to fill positions.

In mid-July, nearly 20 percent of 4,620 planned permanent and temporary positions were unfilled in the Forest Service’s California region, the agency said. By Aug. 12, according to the agency, about 10 percent of those 4,620 positions remained vacant. The agency also said that it had to hire 2,229 more emergency firefighters and that only 31 of the region’s 44 “hotshot crews” — specialized groups dispatched to major fires — were fully staffed as of Aug. 12.

Scientists have long argued that wildfires worldwide are worsening because of broad environmental effects brought on by climate change, including hotter temperatures and historically long droughts. And as the Western U.S. gets hotter and more arid, the intensity, severity and frequency of wildfires are certain to continue rising.

Experts and wildfire policy analysts say the latest federal efforts do too little to offer incentives to do the dangerous and underpaid work of fighting wildfires and to take action that could, in theory, prevent such rapid growth of wildfires.

“Of course it’s a good start, and it’s important, but it’s not going to help solve the long-term issues one bit,” said Miller of Pomona College. “Agencies like the Forest Service burn through their budget just fighting fires, which means that whatever money that could have otherwise been used to help us get ahead of these fires ... is being consumed by the devastating fires of the moment.

“Without more, whatever the federal government does to boost firefighter pay will go up in smoke, along with the land," he said.

(Adam Edelman is a political reporter for NBC News.)