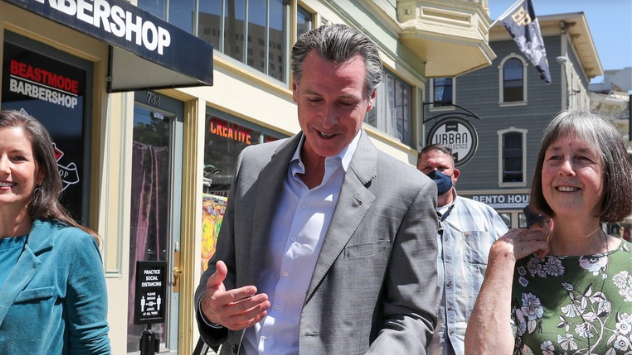 SENIOR POLITICS - I am 72 years of age. I have lived in California most of my life. And I am urging every California senior to vote NO on the recall of Governor Gavin Newsom.

The following will tell the reader why I am voting no on the recall. We will also review who is behind it.

The first reason is simple. Governor Newsom has paid attention to the needs of California’s older citizens more than any Governor in my lifetime. He has taken us through the worst public health crisis in our history. Here are some very real examples.

The recall is a monumental mistake. It has been organized by a group of right-wing Republican extremists hell bent on gaining power.

The Governor worked with health officials to prioritize senior vaccinations as he realized the level of danger to older residents. He ramped up vaccinations, with 78 percent of seniors in California fully vaccinated and 97 percent with at least one dose.

As senior centers were closing due to Covid-19, many services stopped. One of Newsom’s first helpful tactics was setting up emergency food programs which delivered food free of charge to at-risk seniors. California, in partnership with the Federal Emergency Management Agency, launched a new program that paid restaurants and hospitality workers to cook and deliver meals for at-risk seniors. This addressed both issues of nutrition and isolation felt by more than 1.2 million seniors living alone, while also giving a financial boost to the food sector and food workers.

In February of this year, the Governor signed into law the issuance of $600 direct payments to low-income seniors. This cash payment added to the federal cash payments for many seniors who are living on a fixed income.

The Governor put in place an eviction moratorium that protected millions of senior renters up and down the state. He and the legislature budgeted billions to help both landlords and tenants in providing rental help due to loss of income from the pandemic.

Next, seniors are the fastest growing part of the homeless population. As the baby boom generation has aged, the number of homeless people 62 and older increased 68% from 2007 to 2017, according to the U.S. Department of Housing and Urban Development. In Los Angeles County alone, senior homelessness has spiked 22% since 2018.

Through all of this, Governor Newsom still looked to the future. He appointed and supported a group of over fifty senior leaders to create the California Master Plan for Aging. In summer 2019 they all got together and released an overarching statement: “Aging is changing and it’s changing in California. California’s over 60 population is projected to diversify and grow faster than any age group. By 2030, 10.8 million Californians will be older adults, making up one quarter of the state’s population.”

The master plan has five bold goals: Housing for All Stages and Ages, Health Reimagined, Inclusion and Equity, Caregiving that Works, and, finally, Affording Aging. Completed in less than a year, the Master Plan is in the hands of the legislature and implementation is already moving forward.

The recall is a monumental mistake. It has been organized by a group of right-wing Republican extremists hell bent on gaining power (the Republicans have not won a statewide election in years). Newsom won in 2018 with 61.9% of the vote. His opponent from 2018, John Cox, is part of the recall leadership and on the ballot as a candidate for Governor.

Commentators have called the recall a Trumpian enterprise (this author agrees). Many of the recall supporters are promoting even more outlandish and dangerous views as they refuse to wear a mask, deny that Covid-19 is real, and say the “vaccines are not tested enough.”

Earlier this year, none only than Newt Gingrich traveled to California to give the recall his blessing. Seniors will remember him as the House Speaker that attempted huge cuts to Social Security, Medicare and Medicaid…. The bottom line, he has never been a friend to seniors.

I love California. Every part of our great state features innovation and hope. Governor Newsom has guided us through this terrible period of the pandemic with vision and care as well as strategies that save lives and build for the future. We have less than a month until Election Day on September 14, and in that time let’s organize to protect our futures and the futures of those we love.

Our recall vote must be a loud and powerful NO.

(Ernie Powell is Senior Advisor on Grassroots Organizing at Social Security Works. Ernie’s focus for over 40 years has been on public policy issues impacting older Americans. He is a nationally recognized expert on grassroots organizing and campaigns. He is 72 years old and resides in Los Angeles, CA.)