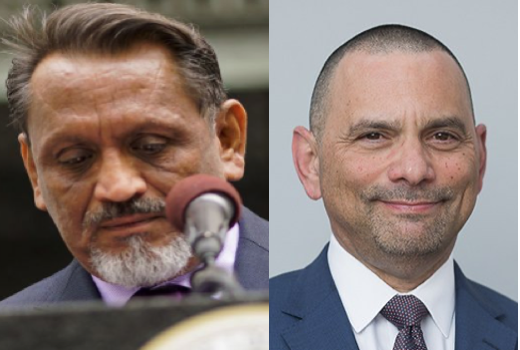 @THE GUSS REPORT-The Los Angeles City Council missed the memo about how affiliating with grifters draws scrutiny, especially since one of its own, Mitch Englander, is a convicted felon headed to federal prison;

another, Jose Huizar, who has pleaded not guilty to federal corruption charges, is looking down the barrel at possibly going away for the rest of his life; and at least three other current Councilmembers are probably having sleepless nights about the future of their freedom or that of their family members.

For those keeping score, that’s 33% (at minimum) of recent LA City Councilmembers legitimately on the FBI’s corruption radar. And the mainstream media wonders why they can’t tackle homelessness or any other major policy concern.

LA City Council, which notoriously violates public records laws and public meeting laws as comfortably as it breathes, has also mastered a way around them: by meeting with said grifters while not maintaining a shred of paperwork.

Check that. While claiming to not maintain a shred of paperwork.

One can often gauge a politician’s discomfort on these things by observing their body language when asked about their affiliation with bribe-minded lobbyists. In the pre-pandemic days, one name that always got Councilmember Gil Cedillo (photo above, left) to stop in his tracks is that of Morrie Goldman, (photo above right) who made headlines in August, as documented in this release from the Department of Justice:

LOS ANGELES – Federal prosecutors today filed a criminal information (sic) charging a longtime Los Angeles City Hall lobbyist and close associate of City Councilman Jose Huizar with participating in a bribery scheme in which he brokered deals where a developer client agreed to make $50,000 in political donations in exchange for Huizar’s official actions for the developer’s benefit.

Morris Roland Goldman, a.k.a. “Morrie,” 57, of Porter Ranch, was charged today with one count of conspiring to commit bribery and honest services mail fraud.

In a plea agreement also filed today in United States District Court, Goldman agreed to plead guilty to the felony offense and cooperate in the government’s ongoing investigation.

A few weeks back, this column submitted a public records request for every official calendar entry Cedillo had since 2016 in which Mr. Goldman was involved. It was to include all related documents.

A few days ago, Cedillo’s chief of staff Debby Kim provided six such calendar entries, but not a single record of anything related to them. Not a Word document or PowerPoint slide. Not an email. Not a leave-behind. Not a business card. Not a receipt. Not a text message. Cedillo and Kim would have you believe that neither they nor his staffers even took notes on these endeavors, including who attended them and what was discussed, in an age when people can’t arrange to meet-up at Starbucks without a barrage of text messages.

Yessirree, Gil Cedillo has everything he needs to know about billions of dollars of development and policy issues right up “here” (taps his right temple with finger).

When I immediately wrote back to Ms. Kim asking where the accompanying paperwork was, she responded that there are no such records. When subsequently advised that I am simultaneously looking at such documents from other sources, like the email Mr. Goldman sent requesting one of those meetings, she responded, “if you already have documents that you need, then I’m not sure what the issue is?”That’s the point, Ms. Kim.

This column made the public records request of Mr. Cedillo knowing in advance some of what you should have provided in response. The purpose of the request was to see whether Mr. Cedillo and his taxpayer-salaried staff were going to be forthcoming and provide the records as the law requires.

Adrian Riskin, who blogs at michaelkohlhaas.org, is a guru in finding and making available these and scores of other public records that politicians like Cedillo would rather you not see, but if you do see them, not understand, like his official May 31, 2018 lunch appointment with Goldman with no topic of discussion listed (see link above).

Undoubtedly, it was to officially discuss the Dodgers’ 2018 prospects.

That raises the questions of why Cedillo fails to provide records related to a buddy of his whose future address is a federal prison cell and why he keeps information from meetings with him in his head (taps right temple once again).

Either way, it’s a bad look that may set-off formal complaints that Cedillo, like his colleagues, aren’t transparent about their relationships with felons who have agreed to cooperate with the FBI.  Goldman did not respond to a request for an interview from this column about his dealings with Cedillo.

NOTE: None of Cedillo’s meetings with Goldman took place on a Tuesday. At least not the meetings which are listed on the lawmaker’s calendar. . .

On a related note, the LAPD has once again attempted to retaliate against this column for its criticisms against the agency and, most recently, for calling for LA City Attorney Mike Feuer to drop out of the LA Mayor’s race due, among other reasons, to the $2.5 million sanction recently leveled against the taxpayers for his malfeasance in a recent lawsuit.

The LAPD, which bends over backward to suppress and obscure public records, most infamously this column’s pursuit of an alleged domestic violence incident involving a public figure, continues to play fast and loose with this columnist’s privacy. Last year, the LAPD and Feuer’s office coughed up a five-figure settlement for doing the same thing.

This time, barring a direct apology from LAPD Chief Michel Moore, who is aware of his agency’s ongoing misconduct, we are headed down that road again.

(Daniel Guss, MBA, was runner-up for the 2020 Los Angeles Press Club journalism award for Best Online Political Commentary and has contributed to CityWatch, KFI AM-640, iHeartMedia, 790-KABC, Cumulus Media, Huffington Post, Los Angeles Daily News, Los Angeles Magazine, Movieline Magazine, Emmy Magazine, Los Angeles Business Journal, Pasadena Star News, Los Angeles Downtown News, and the Los Angeles Times in its Sports, Opinion and Entertainment sections and Sunday Magazine, among other publishers. Follow him on Twitter @TheGussReport. His opinions are his own and do not necessarily reflect the views of CityWatch.) Prepped for CityWatch by Linda Abrams.