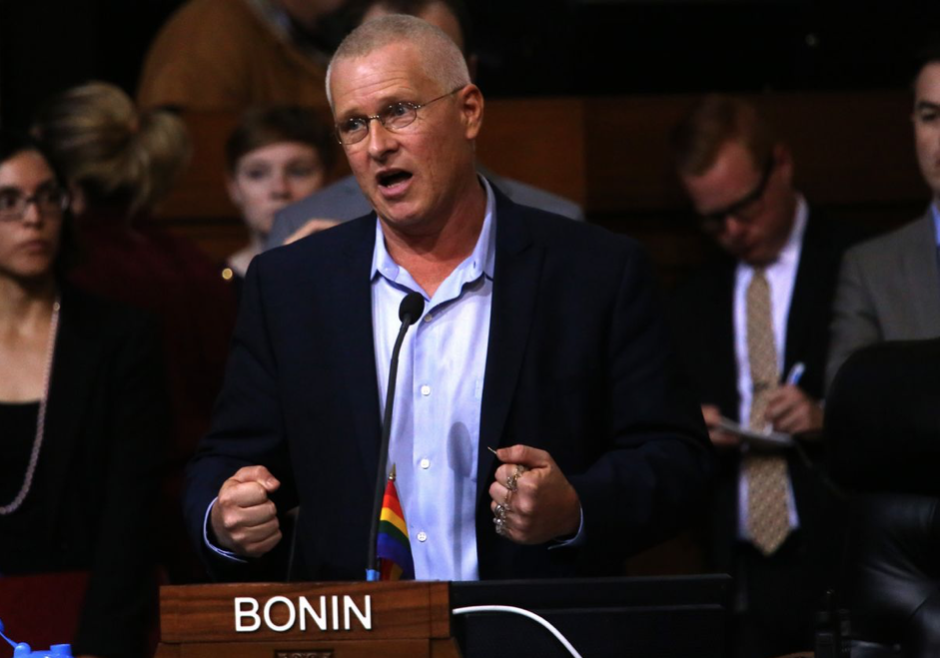 DANCING WITH DEVELOPERS-From emails obtained by Circling the News, it appears that Councilman Mike Bonin and his office took an active part in ensuring that the proposed eldercare facility on Palisades Drive received City approval.

Despite the large number of Highlands residents who opposed the project, Bonin told the California Coastal Commission he was in favor of it.

A 43,033-sq.-ft. vacant lot at 1525 Palisades Drive is the proposed site for a four-story eldercare facility (including a two-level subterranean parking structure, outdoor eating and activities decks and a swimming pool). Those opposed felt that the structure was too big for a Coastal Zone project. Others worried that an eldercare facility was inappropriate in such a high-fire-hazard zone.

Henry Chu, the associate zoning administrator who heard the case and wrote the 32-page Letter of Determination, said the project was within the city zoning requirements. The determination granted the project site plan approval, a Coastal Development permit and a categorical exemption from the California Environmental Quality Act (CEQA).

Opponents quickly appealed the decision and asked for support from the Pacific Palisades Community Council. They were told they first had to go before the council’s Land Use Committee and gain support there.

Prior to the LUC vote, a March 7 email from Edlercare facility developer Rony Shram and Bonin’s Planning Deputy Len Nguyen stated: “We’ve worked with a handful of planning deputies in your office (all of whom have been great), but I’m hopeful you’ll be the one to help us move things forward with the council member’s official support.

“Thank you in advance for reaching out to Reza [Akef] and Gil Dembo. I am sure a call from you will mean a lot to them.”

Only two LUC members, Sarah Connor and Rick Mills, voted to take the matter to the PPCC. Opposing votes were cast by Chris Spitz, Reza Akef, Gil Dembo, George Wolfberg and Richard Blumenberg. (Editor’s note: CTN looked to confirm that the vote was correct, but no minutes are kept of LUC meetings.)

Thus, the appeal of Chu’s decision went to the West Los Angeles Area Planning Commission (APC) on April 18 with no support from the Community Council.

On April 6, an email from Shram’s representative went to Nguyen and Krista Kline, Bonin’s director of land use and planning, stating, “In follow up to our previous meetings and discussions about the Palisades Elder Care Project, we would like to request an in-person meeting with both of you ahead of the April 18 APC meeting.”

On April 13, a change.org petition hosted by the Pacific Palisades Residents Association was sent to Bonin with more than 1,300 signatures opposing the project.

The Area Planning Commission meeting was held before a packed audience and the appeal failed. Only three of the five commissioners attended.

On April 19, Kline sent an email to Shram, cc’ing Nguyen.

“Hello Rony! I’m so glad it worked out yesterday. Len did a fantastic job on our end (And he was giving me the play-by-play via text throughout the hearing!) I guess this proves (once again), that you don’t mess with the seniors. ha. Krista”

Shram replied, “Just wanted to thank you both for all your help with the eldercare project and the preparation for last night’s hearing. I am so grateful for the support we received from you personally as well as the CD 11 office. Great job with the presentation.”

Nguyen replied, “. . .I look forward to the groundbreaking.” 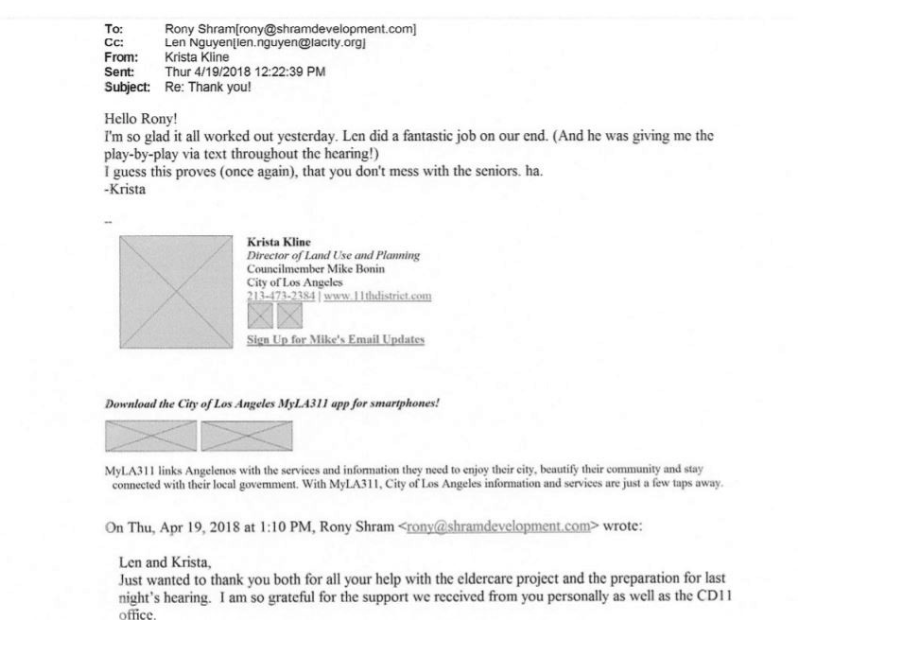 But a CEQA appeal was then filed with the LA City Council’s Planning and Land Use Committee (PLUM), which scheduled the appeal hearing for June 5.

Josh Gertler, president and CEO of Consensus, Inc., a PR firm in Burbank, who was working with Shram, sent a May 29 email to Nguyen. “Again thank you very much for your help in getting this item calendared so quickly. In preparation for next week’s hearing, Rony and I would like to meet with you in person ahead of June 5.”

Two days later Nguyen replied to Shram and Gertler in an email: “I reiterated Councilman Bonin’s support for the project and that my remarks that day will be to urge PLUM to deny the appeal.” 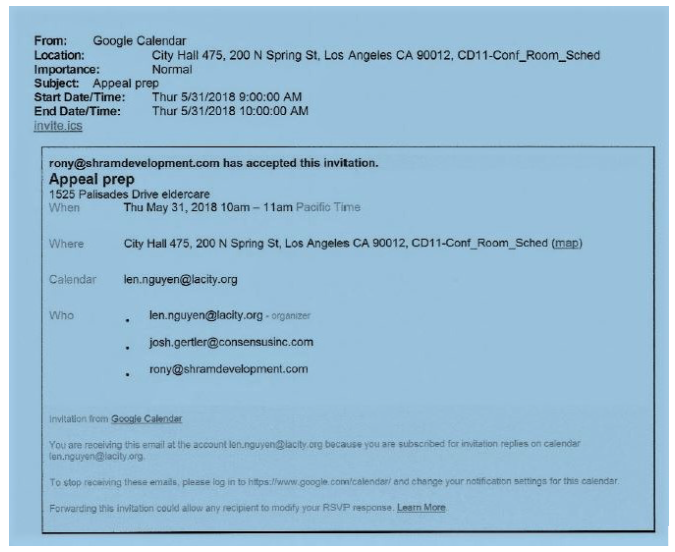 The appeal was denied.

Next, members of the community filed an appeal to the California Coastal Commission asking to deny the Coastal Development Permit granted by the City.

Some residents were not notified of the hearing date for the appeal in a timely manner by the Coastal Commission and even though those filing the appeal objected and asked if the meeting could be held a month later (in Redondo Beach), the meeting went forward on July 11, in Santa Cruz.

But not before another request was made by Shram on June 12 to Nguyen: “Prior to the CEQA appeal at PLUM, we discussed possibly getting a letter from you to the Coastal Commission to express the Council member’s support for the project.

“I met with our legal team on Friday morning to review our strategy for Coastal. Ben Reznik reached out to Mike to let him know we were preparing for the appeal. They both agreed that it would be a good idea to get a letter into the commissioners. I believe you mentioned that you’ve written such letters in the past, so hopefully it’s something we could pull off fairly easily.

“Let me know your thoughts when you have a minute. And as always, many thanks for all your hard work and support. We are so grateful. Best, Rony.”

On the Coastal Commission website, it was noted that “Commissioner [Mary Luevano] is not accepting Ex-Parte requests.”

Still, at the Coastal Commission Hearing, Luevano noted she received a text, an Ex-Parte, from Councilman Mike Bonin on Monday, July 9 around 2:30 p.m. She read the following note to the Commissioners, who would be voting. “He just wanted to let me know he is in favor of the project and most people in the community are in favor of it and that we need it.”

Back on March 20, Circling the News contacted Bonin’s spokesperson David Graham-Caso and told him that CTN “received numerous emails that documented that the Councilman’s office worked closely with Rony Shram and the eldercare facility, even though there were numerous residents opposed to the size of the project.

“The other nursing home in town, which provides Alzheimer and dementia care, has empty rooms, so the need for the Highlands facility, which has been one of the reasons given, appears not to be valid.

“Would the Councilman like to explain why he decided to back this project?”

There has been no reply.

CTN reached out to the Pacific Palisades Residents Association, one of the organizations that opposed the project as it was presented. There was no comment because they are currently in litigation with the City.