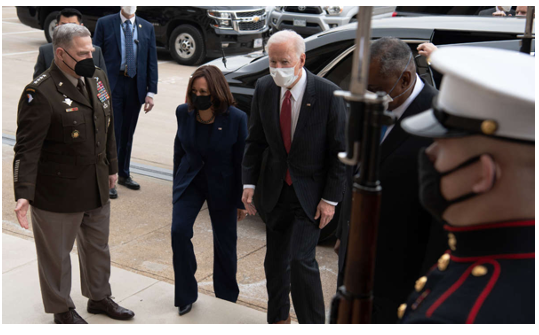 United States has bombed Syria more than 20,000 times over the past eight years, so last week’s attack on a border post in northeastern Syria, which killed 22 militiamen and apparently no civilians, may not seem surprising to some.

However, taking place barely five weeks into his presidency, it is nevertheless disappointing that President Biden appears determined to continue the failed policies of his predecessors, regardless of their illegality.

Some members of Congress challenged Biden’s authority to order such an attack, which contravenes both international law and the U.S. Constitution. Virginia senator and 2016 vice-presidential nominee Tim Kaine stated that Americans deserved to know the “rationale” for the strikes and the “legal justification without coming to Congress,” noting that, “Offensive military action without congressional approval is not constitutional, absent extraordinary circumstances.”

Similarly, Democratic Rep. Ro Khanna (D-California) tweeted: “We ran on ending wars, not escalating conflicts in the Middle East. Our foreign policy needs to be rooted in diplomacy & the rule of law, not retaliatory airstrikes without Congressional authorization.”

Sen. Rand Paul (R-Kentucky) condemned the strike as an attack on “a sovereign nation without authority.”

The targeting of the Iraqi Shia militia on the Syrian side of the border, several hundred miles away from U.S. forces, seemed to be more of a political decision than a strategic one. Since these militias operating inside Iraq are nominally part of the Iraqi armed forces, bombing them inside the country would have created a huge popular backlash. By contrast, Washington cares little for what Syrians think.

The Biden administration charges that these militiamen were smuggling Iranian arms from Syria. However, this claim doesn’t make much sense, since such weaponry could come directly from Iran, which shares a much longer border with Iraq.

It’s true that these militias are proxies for Iran (unlike the Yemeni Houthis, where the alleged Iranian role is exaggerated, or the opposition movement in Bahrain, where the actual Iranian role is quite minimal). They place their allegiance to the ayatollahs above Iraqi national interests. In Syria, in addition to fighting Salafist extremists, they have also assisted the brutal repression of other opponents of the Assad regime and have participated in war crimes. Similarly, in Iraq, they have engaged in atrocities against members of the Sunni minority and have murdered peaceful pro-democracy activists protesting the corrupt U.S.-backed regime in Baghdad.

ISIS and the Shia militia were a direct consequence of the U.S. invasion, occupation and counterinsurgency war in Iraq. Under the old regime, there were virtually no armed Salafist and pro-Iranian groups.

Legally, however, these militias are present in Iraq and Syria at the request of those countries’ governments. By contrast, the Syrian government has demanded the withdrawal of U.S. forces from Syria and the Iraqi parliament has called for a U.S. withdrawal from Iraq.

Ironically, despite reports of atrocities, a number of these Shia groups were initially encouraged by the United States to fight Baathists, other nationalists, and various Sunni groups fighting the U.S. forces and the U.S.-installed government in Baghdad during the height of the counterinsurgency war which soon followed the U.S. invasion. More recently, the U.S allied with them in the fight against ISIS (also known as Daesh). Following the defeat of ISIS, now limited to a handful of scattered units without control over any Iraqi territory, it was presumed U.S. troops would leave, However, 3,500 American soldiers remain in northern Iraq, and U.S. planes and missiles are poised to strike at any time.

The United States began bombing these ancient lands 30 years ago, at the start of the Gulf War. The U.S. has continued bombing Iraq and neighboring countries on and off ever since. Each time, we have been told that doing so would protect American interests and help bring peace and stability to the region. Yet each period of airstrikes has brought more suffering, more violence, less security and greater instability.

In Syria, Washington keeps changing targets: Initially, the U.S. targeted facilities belonging to the Syrian government; next, the U.S. bombed ISIS forces, by far the most common target; now, the U.S. is going after Shia militia. For Washington, it seems that whatever the problem is, the answer is bombing.

From Lebanon to Somalia, other hostile countries filled with competing armed groups, the major purpose of maintaining a U.S. troop presence appears to have evolved into simply protecting themselves from attack.

The Biden administration defends the ongoing presence of U.S. troops in Iraq as necessary to fight the remnants of ISIS as well as the Shia militia. What bears noting is that both ISIS and the Shia militia were a direct consequence of the U.S. invasion, occupation and counterinsurgency war in Iraq. Under the old regime, there were virtually no armed Salafist and pro-Iranian groups.

Indeed, back in 2002, a number of prominent Middle East scholars (including myself) had wanted to testify before the Senate Foreign Relations Committee prior to the Iraq War authorization to warn that a U.S. invasion could result in the rise of just such extremist groups. However, then-chairman Joe Biden — a strong supporter of the invasion — blocked our testimony.

Even some opponents of the initial decision to invade now argue that the United States should nevertheless keep troops in Iraq to help “clean up” the messes we created. However, we must seriously ask what difference our troops are making in curbing extremist violence, given the risk of provoking a wider war as a result of their continued presence. Indeed, such hostilities brought us extremely close to an all-out war with Iran in January of last year.

As we have seen from Lebanon to Somalia, other hostile countries filled with competing armed groups, the major purpose of maintaining a U.S. troop presence appears to have evolved into simply protecting themselves from attack. At such a point, it begs the question of: Why the hell are U.S. troops still there?

Instead of bombing a neighboring country, if Biden is really concerned about protecting our troops, why not just bring them home?

(Stephen Zunes writes for Truthout … were this piece was first posted.)