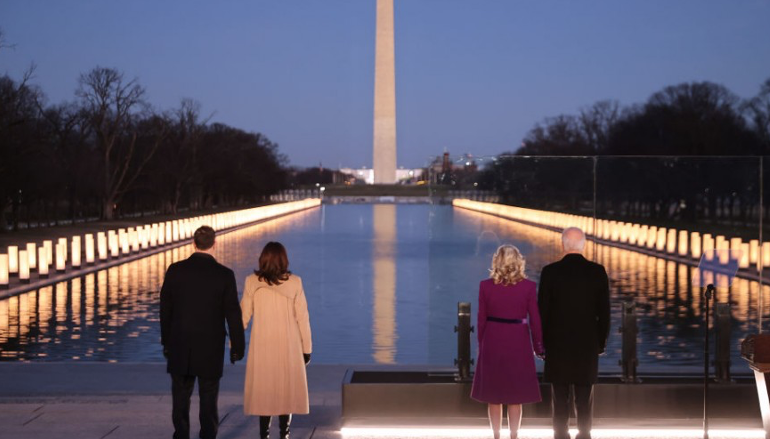 A NEW WORLD-We did it. We took control of the Senate from Mitch McConnell.

Even so, Republicans may still be able to block key parts of Joe Biden’s agenda. But there are plenty of critical policies he can and must enact without them.

Biden’s first task is to undo Trump’s litany of cruel and disastrous executive orders. He has already announced he’ll rejoin the Paris Climate Accord, re-enter the World Health Organization, and repeal Trump’s discriminatory Muslim travel ban. And there are at least 48 other Trump policies that he can reverse on day one.

In addition, here are 10 critical policies Biden can implement without Congress:

FIRST: He can lower drug prices through Section 1498 of the federal code, which gives the government the power to revoke a company’s exclusive right to a drug and license the patent to a generic manufacturer instead.

SECOND: He can forgive federal student loans—thereby helping to close the racial wealth gap, giving a financial boost to millions, and delivering a major stimulus to the economy.

THIRD: He can use existing antitrust laws to break up monopolies and prevent mergers—especially in Big Tech and the largest Wall Street banks.

FOURTH: He can institute pro-worker policies for federal contractors—who are responsible for a fifth of the economy—such as requiring a $15 minimum wage and paid family leave, and refusing to contract with non-union companies.

FIFTH: He can empower the Labor Department to aggressively monitor and penalize companies that engage in wage theft and unpaid overtime, and who misclassify employees as independent contractors—as Uber and Lyft do.

SIXTH: He can make it easier for people to get health care by eliminating Medicaid work requirements, reinstating federal funding to Planned Parenthood, and expanding access to Affordable Care Act plans. Then it’ll be up to us to push him to enact Medicare for All.

SEVENTH: He can ban the sale of public lands and waters for oil and gas drilling. He can further tackle the climate crisis by reinstating the 125 environmental regulations rolled back by Trump and directing federal agencies to deny permits for new fossil fuel projects and halting all fossil fuel lease sales and permits.

EIGHTH: His Securities and Exchange Commission can reinstate its ban on stock buybacks—so that corporations are more likely to use their cash to invest in workers instead of enrich their shareholders. And he can rein in Wall Street by strengthening the Consumer Financial Protection Bureau and other financial regulators, while his Treasury Department can close many tax loopholes.

NINTH: He can address the cruelty of capital punishment by granting clemency to everyone on federal death row, effectively ending the death penalty with the stroke of a pen. He can address other injustices by having the Department of Justice implement mass commutations for low-level drug offenders, strengthening the department’s Civil Rights Division, and reining in rampant police misconduct through consent decrees. And he can undo some of the damage wrought by the racist war on drugs by directing his Attorney General to reclassify marijuana as a non-dangerous drug.

TENTH: He can reverse Trump’s cruel immigration agenda by restoring and expanding DACA and raising the yearly number of refugees who can be admitted.

Even with control of the Senate, Democrats’ slim majority means that Republicans can still obstruct Biden’s policy agenda at every turn. Biden can and must wield his presidential powers through Executive Orders and regulations. The problems America is facing demand it.

(Robert Reich is the Chancellor’s Professor of Public Policy at the University of California, Berkeley, and a senior fellow at the Blum Center for Developing Economies. He served as secretary of labor in the Clinton administration, for which Time magazine named him one of the 10 most effective cabinet secretaries of the twentieth century. His book include:  "Aftershock" (2011), "The Work of Nations" (1992), "Beyond Outrage" (2012) and "Saving Capitalism" (2016). He is also a founding editor of The American Prospect magazine, former chairman of Common Cause, a member of the American Academy of Arts and Sciences, and co-creator of the award-winning documentary, "Inequality For All." Reich's newest book is "The Common Good" (2019). He's co-creator of the Netflix original documentary "Saving Capitalism," which is streaming. This piece appeared on CommonDreams.org.) Photo by Chip Somodevilla/Getty Images. Prepped for CityWatch by Linda Abrams.