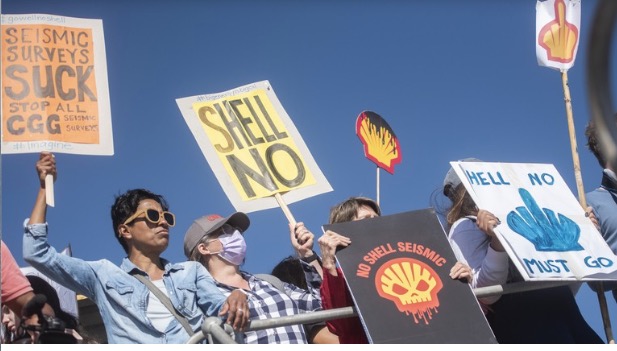 Shell posted adjusted earnings of a staggering USD 11.5 billion for the second quarter of this year, beating the USD 9.1 billion from the first three months of 2022.

Europe’s largest oil group was boosted by the sky-rocketing energy prices caused by the Ukraine war.

This means in the first six months of this year the oil giant has earnings of over USD 20 billion. This is profiteering at its most greedy and grotesque.

Ironically, the company even produced less oil than in the first quarter, but raked in record profits due to Russia’s invasion of Ukraine.

What it is doing with these record profits is also interesting. In a move that surprised many analysts, the company said it was putting USD 6 billion of these profits into a share buyback scheme, which rewards shareholders. This fact was not lost on the company’s critics, who pointed out that the company was enriching itself and shareholders and not investing in renewables.

Shell was not alone in reporting record earnings. Its French rival, TotalEnergies also reported record profits of USD 9.8 billion in the quarter. Tomorrow, it is expected that Exxon Mobil and Chevron will report record profits, too.

The oil industry’s obscene profits come as millions of people face a cost of living crisis. In the UK, at least, energy bills are expected to rise again in the coming months. One estimate is that they could hit nearly GBP 4,700 a year by early next year.

Influential commentators on Twitter were quick to criticize the obscene profits and the contrast to millions struggling to pay food and energy bills. The situation is predicted to get so bad that financial experts are warning that intervention is needed.

As Platform says, the system is broken. We may be in the dying days of the fossil fuel empire, but those companies are enriching themselves like never before, as people die from our climate crisis and die this winter from lack of food and heating. Families will be destitute. And all the while, politicians sit idly by. This situation cannot be allowed to continue.

(Andy Rowell is a staff blogger for Oil Change Internationalin addition to working as a freelance writer and investigative journalist who specializes in environmental, health and lobbying issues. He is a senior Research Fellow at the University of Bath and Director of the Tobacco Tactics team at the Tobacco Control Research Group, which is a partner in the global tobacco industry watchdog, STOP. This article was published in Common Dreams.)

FBI Seized About a Dozen Boxes in Raid of Trump Home in Florida, Lawyer Says

Trump Tax Returns Must Be Given to Congress, Federal Appeals Court Says in New Ruling