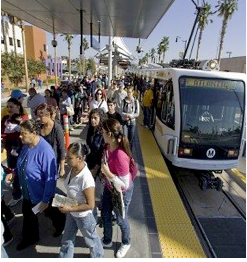 ELECTION 2012 - Supporting Measure J is one action that will be Justified to every taxpayer in LA County for years and generations to come.

Justified that Measure J will invest in residents of South LA and East LA accelerated access to job connections via the very construction activity that these transit corridors that will provide through the Project Labor Agreements.

Justified that disadvantaged communities will have easier and faster access to higher paying jobs in the South Bay and Gateway Cities through the Light Rail extensions of the South Bay Green Line and West Santa Ana Corridor that will be accelerated under Measure J.

Justified that, within a decade, the Westside Subway will give up to an hour of time back to those from every community under the sun who are stuck in jam-packed buses on Wilshire Boulevard, or who travel through the congested Sepulveda Pass and will finally have a transit alternative.

Justified in the fact that commuters will see an accelerated plan to allow travel from the beaches of Santa Monica and Long Beach to the growing Inland San Gabriel Valley (and vice versa) with one of the most vital transit projects in the nation—the Regional Connector that links four currently-unconnected light rail lines--because of Measure J.

Justified that future generations will be the greatest beneficiary of accelerating these projects through Measure J, because of this accelerated system that finally has the greater network connectivity to ensure the original intent of Measure R with a transit network that will finally reach the jobs, communities, airport terminals, education campuses, beaches and activity centers throughout LA County.

Justified that LA County residents have wisely invested 30 more years of dedicated funding towards local communities and transit operations dollars to improve transit service and investment in first-to-last mile strategies of linking communities and activities via walking and biking to transit stations, while fixing and upgrading the road and freeway system we now have.

All in all, Measure J is a JUSTIFIED approach that will link jobs, families, communities and the region together, both for the present and the future.

(Jerard Wright is a South LA Resident and Darrell Clark is the Co-Chair of the Sierra Club Angeles Chapter Transportation Committee.)
-cw