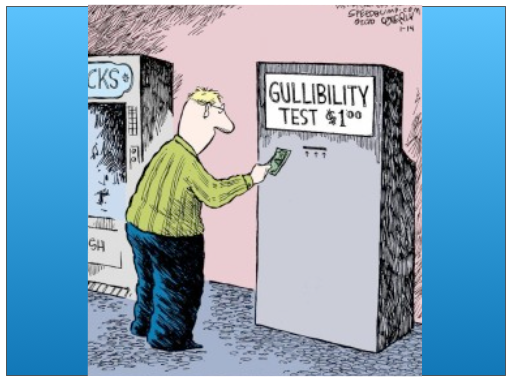 GELFAND’S WORLD - The problem with end-of-year columns is that they can be pretty redundant.

I'm not going to repeat all the details of the attempted insurrection or the lack of evidence behind the Big Lie. We've all heard them and are sick of hearing about them. But there are a couple of issues from the year 2021 that bear a little closing discussion.

For one, this is and has been the Year of Gullibility.

The gullibility begins with (what else?) the political but extends to medical science and to half of everything else, from jet vapor trails to the funding of local governments.

We used to complain that people are getting cynical. If only that were still the case.

Instead, this has been the year of the gullible. How could anybody actually believe anything Donald Trump has ever said? But somehow a substantial fraction of the voting age population say that they believe that the 2020 presidential election was stolen from the incumbent and, therefore, from them.

There isn't much point in going back over the evidence or the legalities. It's all been beaten to death on network television and on the saner internet sites. But there it is -- an alternative universe with its own inhabitants -- what pundits used to call "the bubble." There are still lots of people in that bubble.

The major characteristic of the bubble is that it chooses its own topics -- mostly attacks against Democrats -- and pretty much ignores topics which would be uncomfortable for the other side of the aisle to confront.

Here's the part where I have to wonder about all those people in the bubble. There have been books and books by insiders -- the people who worked in the president's cabinet and in the top ranks of the military and on his staff. The journalists who broke the Watergate story have done their own books. Newspaper reporters got their own insider tips at the beginning of the Trump presidency. And the sum total of these stories is of a president who was either unwilling or incapable of learning, who refused to read lengthy or complex summaries, and who lived by wishful thinking rather than critical thought.

That really is the story of the Trump presidency -- that and his well established propensity to lie whenever the mood struck him, no matter how much evidence there was on the other side.

So here is my question. Of all those books, news stories, magazine articles, and live interviews, how can they all be fake? You don't find talk of a calm, rational person behind the Trump hairdo, but there is an overwhelming lode of evidence that talks of his incompetence and emotional instability. This argument is made compelling by the combined record for journalism and fact gathering of the authors. It's true that some of the authors are (as we already knew) Trump lackeys, but when it comes to the author of the Watergate story and so many other reputable journalists, there is little reason to find doubt.

But tens of millions of Americans buy into the nonsensical bill of goods that led to the attack on our nation's Capitol on January 6 and even now continues with untruthful claims that the Capitol Riot was relatively peaceful or like a usual day of tourist visits.

That gullibility and what it led to are the big stories of 2021.

The problem is that we don't have an end to this particular story. The same forces that drove the Charlottesville riot and the Capitol riot continue.

There seem to have been two different January 6s in the United States this year: the one that I watched on television featuring fiercely angry mobs -- or the fanciful assemblage of patriotic Americans who walked peacefully past the welcoming arms of the Capitol Police. That second version has been insinuated and even used as a defense in the criminal courts. Some people even believe it because they refuse to access the sources that carry the counterarguments.

There's a whole lot of gullibility out there nationally but we also have it around here, locally.

Just to mention claims that require a certain amount of gullibility to swallow, here's a few that we will likely be hearing in the upcoming mayoral race:

1) We can pay increased salaries to our city employees without creating a structural deficit.

2) We can substantially enlarge the size of the LAPD (say by another five hundred or a thousand officers) without taking the money from somewhere else or creating a new tax or otherwise raising the city's income.

3) Your City Council representative wasn't aware of the corruption and bribery going on in the planning and land use committee. That's why he/she didn't say anything to stop it.

Vaccine resistance as a further example of gullibility, but with a certain logical center

There seem to be a lot of people who are saying, "I'm healthy and young. Why should I get the vaccine, since I'm quite unlikely to die from the virus?"

The curious thing is that they aren't that far wrong. Actually, it depends on which numbers you look at and how you look at them. Let's consider.

Over the entire course of the epidemic, only a little over one person out of every 500 of us has died from the Covid-19. Some people (particularly young people who write silly questions to the online site called Quora) seem to think that one in five hundred is fairly inconsequential. And that goes particularly if they are themselves on the safer end of that mortality curve, like being under 50 and lacking obesity or diabetes.

Here's another way of looking at things: Compare the national death toll from Covid-19 to the death rate among young men drafted into the army from 1942 through 1944. The total death toll among U.S. armed forces personnel in WWII was about 400,000 with total killed plus wounded being around a million. Considering that there were about sixteen million Americans who served in all of the services combined, that is a pretty high rate of death and injury, something like six percent of everybody involved.

Compared to that rate, the Covid-19 toll of a little less than a million has occurred in a population of about 334 million. In other words, the Covid-19 death rate by population will probably end up being about twenty times lower than the overall death plus wounding numbers of WWII.

On the other hand, the number of people in this country who ultimately get Covid-19 at one level or another will probably end up being almost everybody who has not been vaccinated plus quite a few of the vaccinated.

In other words, it depends on how you look at it. One way comes across as pretty horrible -- everybody gets it one way or the other, and close to one in fifty of those will die -- or it is less consequential because you have a pretty good chance of not dying overall.

That was the argument until a few weeks ago, before Omicron. But now there is a new argument and this is where gullibility comes in.

Up till now, the odds of getting a fatal dose of Covid have been pretty low. But that's really not the way to look at it. It's like hitting double-zero on the roulette wheel once over the course of a day. It's not that often or that likely, but when it happens the results are consequential. In this case, instead of winning or losing money, you die a difficult and painful death.

And the rest of the argument is that you can do a pretty good job of protecting yourself by getting a couple or three injections. Mine didn't really hurt and they didn't have much in the way of side effects.

So the vaccine hesitant are the ones who are really gullible in this country, because they are betting their own lives on claims made by paranoid ignoramuses over a procedure which is largely painless and safe.

One other point as this weary year winds down. That 816,000 total of Covid-19 dead in this country since the epidemic started may be relatively low as a fraction of the entire population, but it still is a lot of people. It's more than any of our wars and would take close to twenty years to match by traffic accident deaths.

The grim story on the nightly news

You don't have to do a lot of searching to find those grim stories of some middle aged father who didn't get the shot and is now in the hospital dying of the virus. Some of the stories begin with his death and go back from there. It's curious how often a doctor will tell a reporter that the sick man confessed that he had been wrong and now would like to get the vaccine.

This is ignorance of a special kind. The vaccine is good enough to (mostly) prevent the active virus from getting its first foothold in your body. The vaccine explains to your immune system what Covid-19 is -- it does that by presenting an inactive part of the virus that you body can learn from -- and the vaccine does nothing at all for you when you already have millions of copies of the active virus already replicating in your cells.

High school students are taught this (or should be taught it) but millions of our fellow citizens didn't get the memo.

And this is the ultimate definition of gullibility, and at a level that can and will cost people their lives.

Some of our more gullible families still want to believe in the effectiveness of ivermectin and even hydrochloroquine. In one celebrated case, the widow of a newly-deceased man punched and broke the nose of the physician who came to offer his condolences. She blamed him for refusing to give these drugs.

It's a curious question as to whether the medical profession should give a dying patient a useless or dangerous drug, even though the patient and the patient's family demand it.

I say, "Why not?" How about setting up a few clinics which will agree to offer the ivermectin and hydrochloroquine along with the rest of traditional Covid care. They can even keep statistics on who gets it and how many survive. Better yet, invite biostatisticians who don't have a stake in the outcome to do the studies. (Hint: The studies have already been done, and the stuff really isn't helpful.) We'll probably end up with repeats of the studies that were well done previously. But at least the doctors and nurses won't have to put up with abuse and violence simply for being scientific. And if one of the drugs does heart damage, it was at the patient's request, and a certain fraction of patients wouldn't have even accepted hospital care if they couldn't get their own particular brand of bug juice.

Notice that this last suggestion does not go towards curing or preventing gullibility. It just recognizes its existence and tries to work its way around the problem.

The same kind of remedy might exist in the political realm. Can we find it?