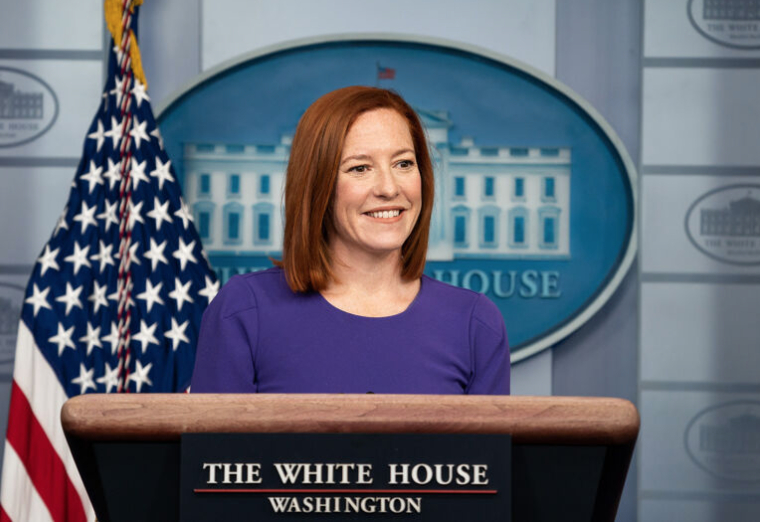 Hunter Biden has been at the center of rightwing conspiracy theories for over a year since Donald Trump accused him – without evidence – of taking millions of dollars in a “payoff” from China in 2013.

“There was concern when President Biden took office about his son’s business dealings with China,” Robinson asked, not stating who was concerned. “He was supposed to divest himself of his stake in a Chinese private equity firm in December with ties to the Chinese central bank. As of April, he had not yet done that.”

“Has he dissolved that interest now?”

Psaki said that Hunter Biden doesn’t work for the White House or the Biden administration, so she’s not the person to ask.

“I’d point you to his representatives on that,” she said.

But Robinson wouldn’t let it go.

Psaki again said that Hunter Biden doesn’t work where she works so she can’t answer that question and told Robinson to ask Hunter Biden’s people.

Robinson, agitated, started shouting. It’s not clear what she said.

“There’s no reason to yell,” Psaki responded calmly. “I’m certainly not yelling. You should talk to his representatives. That remains his policy.”

Unlike Biden’s son, Donald Trump’s daughter Ivanka Trump and his son-in-law Jared Kushner both had official positions in the White House during the Trump administration.

They made up to $640 million while Trump was in office by one estimate, and their businesses got trademarks approved and extended in Russia, China, and Japan during the administration, sometimes shortly after Ivanka Trump met with the leaders of those countries.

Robinson, the reporter who was shouting at Psaki, referred to the Christian conservative Supreme Court Justice Amy Coney Barrett as “Amy Commie Barrett” earlier this year after the Court refused to ban colleges and universities from requiring students to be vaccinated against COVID-19.

(Alex Bollinger has been working in LGBTQ media for over a decade and has a Masters degree from the Paris School of Economics. He lives in Paris with his partner. Follow @alexpbollinger on Twitter.)