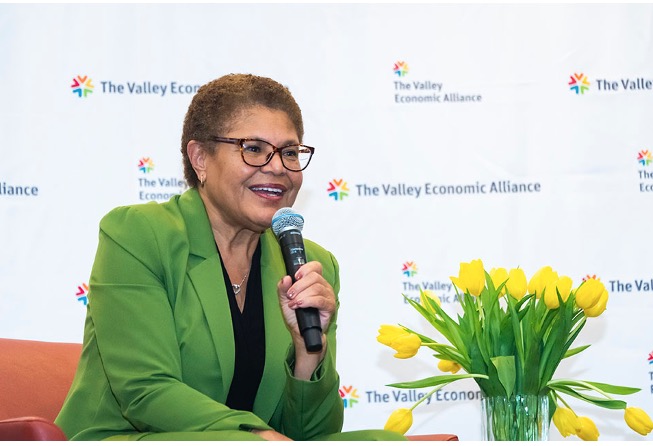 RantZ & RaveZ - Los Angeles Mayor Karen Bass was the featured speaker at the Valley Economic Alliance Summit at California State University Northridge (CSUN) campus on January 12.  Unlike previous L.A. Mayors, Mayor Bass has made it a priority to visit as many communities around Los Angeles as she can fit into her demanding schedule.  As they say, Where there is a Will there is a Way.

Since placing the city under two EMERGENCY declarations due to the expanding Homeless population and the continuing prolonged rain throughout Los Angeles and beyond, Mayor Bass has had her hands full with personal visits and reviews of the many serious situations impacting most neighborhoods throughout Los Angeles.

The Economic Alliance Summit drew a variety of elected representatives, municipal staff along with business leaders from the cities of Los Angeles, Burbank, Calabasas, Glendale, and San Fernando.

Mayor Bass discussed Economic Development in the San Fernando Valley and the Los Angeles region.  The challenging multiple layers of networks and obstacles business face with city’s rules and regulations.  The mayor wants Los Angeles to become “Business Friendly” and not hostile to business.  She is in the process of hiring a Deputy Mayor for Business Development to help business progress and move forward in cooperation with the city.  Mayor Bass wants to bring people to the table and link arms with the city.  Mayor Bass is known as one who builds coalitions to accomplish objectives and goals.

As a former Speaker of the California State Assembly and a member of Congress, Mayor Bass has developed a reputation of getting things done working with people from a variety of backgrounds.

When local business owners begin to move from Los Angeles to other regions of the country, Mayor Bass believes that the city should reach out to them and be proactive and not reactive.  The mayor believes the city can do much more to retain business from moving out of Los Angeles.  The Mayor believes in regional solutions to assist business owners.  Cooperation and a helping hand is what Mayor Bass wants to foster and implement in dealing with the greater business community.

Mayor Bass mentioned Richard Close who was the legendary community leader with the Sherman Oaks Homeowner’s Association for more than 40 years and passed away in 2022.  Richard was known for his statement that the Valley does not get its fair share of services from Los Angeles Government.  Mayor Bass want to change that situation and provide services to all neighborhoods of Los Angeles.

The Mayor concluded her comments with the statement “Anytime you invite me I will be back.”  I encourage organizations in Los Angeles to invite Mayor Bass to your community events.

You will be impressed with her desire to make Los Angeles a better place for everyone.

I was able to meet with Mayor Bass following her appearance and congratulated her on her election victory and wished her success as Mayor.  She gave me a big smile as she moved along to attend to other duties.

In addition to Mayor Bass, newly elected Los Angeles County Supervisor Lindsey Horvath attended the summit and addressed the audience.  Horvath was a small business owner and West Hollywood City Councilmember prior to her election to the County Board of Supervisors.

Supervisor Horvath unlike retired Supervisor Sheila Kuehl stated that she is committed to the San Fernando Valley and will be engaged in Valley activities.  Horvath believes that Homeless is the number one priority for her and the region.  She will be working with other governmental agencies in addressing the situation.  Like Los Angeles City, Los Angeles County and Long Beach have all joined in establishing the Homeless situation in the region as an Emergency with an   Emergency Declaration.  This brings many additional resources to focus on the matter and address the situation with the hope of resolving the situation in a timely manner.

We can all hope that the newly elected officials can muster enough resources to finally address and reduce if not eliminate the Homeless population in the Los Angeles region.  Keep your hopes up on this matter.

Are we headed for a Recession or Depression in America?

The news has not been good on the economic front of America.  50% of employers expect to lay workers off in the coming weeks.  20 million American households are behind on their utility bills.  Have you checked your most recent So Cal Gas Bill?  Thru the roof!  $13.5 trillion in American wealth has evaporated as stocks and real estate prices have fallen.  Food prices continue to rise with even vegetables up over 80% in the past year.  People are even having a hard time finding eggs.  I recently found lots of eggs at Costco!

Bed Bath and Beyond reports wider than expected loss as possible bankruptcy looms and Amazon is in the process of laying off more than 18,000 workers.

Not a very pretty picture for American families.  Add to this Gloom and Doom, I discovered this from Bernie Marcus the 93-year-old Billionaire Home Depot Co-Founder who was interviewed by the  Financial Times.

Marcus stated that he’s worried about capitalism and said thanks to socialism, “Nobody works.  Nobody gives a damn.  Just give it to me.  Send me money.  I don’t want to work – I’m too lazy, I’m too fat, I’m too stupid.”  He listed human resources executives, government bureaucrats, socialists, Harvard graduates, MBAs, Harvard MBA, lawyers, and accountants as the obstacles to entrepreneurial success in 2022.

(Dennis P.  Zine is the author of RantZ and RaveZ.  The column in CityWatchLA.com is brought to you every other week to enlighten you on activities in the Los Angeles area.  Dennis is a retired member of law enforcement and the L.A. City Council.)