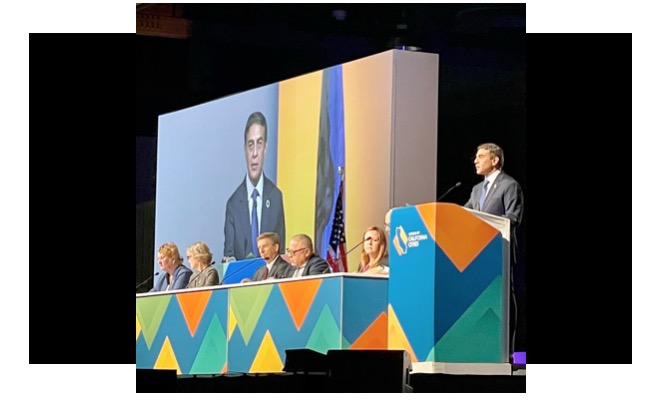 GUEST COMMENTARY - The League of California Cities (aka CalCities) annual conference last week was a great one if you’re a fan of swag.

Not so great if you’re a fan of local democracy.

The exhibition hall featured exhibitors who were giving away everything from golf towels, to water bottles, to cell phone cables, to bottle openers with flashlights, to baseball caps, to all manner of pens, to selfie-lights, to wireless cell phone chargers, to stress balls in a variety of shapes, to assorted coffee cups.  If you love swag, the CalCities conference didn’t disappoint.

On the other hand, if it’s local democracy you’re passionate about, the conference was a total dud.  Thanks to some serious behind-the-scenes maneuvering with League insiders pulling out all the stops, the conference’s general assembly refused to even discuss endorsing an initiative that would restore land-use decision-making to local communities.

That’s right.  The general assembly of an organization whose mission is “to expand and protect local control for cities through education and advocacy to enhance the quality of life for all Californians” refused to even discuss collaborating on an initiative that would counter the massive assaults from Sacramento on local democracy.  In the face of the continual onslaught of Sacramento’s one-size-fits-all anti-Community laws that aim to turn over the keys to city halls across the state to the Urban Growth Machine, the Our Neighborhood Voices initiative aims to restore community-based decision-making specifically when it comes to land use, zoning, and urban planning.

But the League wasn’t interested. A grass-roots effort gathered the signatures of 100 voting delegates to the League’s general assembly to put a resolution of collaboration with Our Neighborhood Voices on the general assembly floor.  After the signatures were verified, the League’s leadership sent the petition to the “General Resolutions” committee, made up of League insiders, who decided to shunt the effort to various sub-committees, where it can die a quiet death.

Before the members went through the motions of the pre-ordained vote, I spoke before the committee and urged them to engage in collaboration with the initiative organizers:

“This [i.e. the League] is not an organization that is supposed to sit on its hands while cities are being attacked on a daily basis by Sacramento politicians whose job should be to support our communities, not to impose constant unfunded mandates on us.  They are failing miserably when it comes to that.

While the committee and the League seem to have answered my first three questions with a ringing “no,” and my last question with a ringing “yes,” the arrogance of this committee was perfectly encapsulated by a contemptuous statement made by former League president, Cheryl Walker Viegas, a councilmember from El Centro (in Imperial County). Walker Viegas dismissed the effort to restore local decision-making as “government by soundbite” and voted to effectively kill the resolution.

Perhaps she wasn’t aware how her statement infantilized and insulted the 100 elected officials who signed the petition. Perhaps she was, and just didn’t care. At any rate, the blatant animosity of the “General Resolutions Committee” members made it clear that the League is suffering from a major case of Stockholm syndrome, mission creep, NIH (Not Invented Here) disorder, or a combination of all three.  One member even had the chutzpah to parrot the false narratives Sacramento uses to scapegoat and demonize cities, as if putting for-profit developers and the Urban Growth Machine in charge of urban planning will somehow solve climate change or create social justice.

In addition to its unambiguous mission statement, the League lists its core beliefs on its website.  Of eleven statements of belief, the very first one is:

Local self-governance is the cornerstone of democracy.”

Well, maybe once upon a time…

In the past, under the leadership of Chris McKenzie, the League actually did advocate for local democracy, and when they needed to fight, they fought for it.  In 2004, for example, the League spearheaded the passage of Prop 1A, which amended the state constitution to stop the ongoing raids on local revenue from the Sacramento legislature.

Sadly, the League seems to have lost its way. Hopefully, that will change under the leadership of newly installed President Ali Sajjad Taj, councilmember from Artesia, who recognizes the importance of community-based decision-making.  Hopefully, despite what is sure to be massive internal institutional resistance, Ali can help the League find its way -- as well as the intestinal fortitude, when necessary -- to go back to being a potent defender of local democracy.

In the meantime, the coalition of people and cities who support Our Neighborhood Voices and who oppose the destructive, greed-driven, anti-Community policies coming from Sacramento, is growing; and they are exploring other options and coalitions to advocate on behalf of our unique, diverse communities, neighborhoods, and cities throughout the state.

A full and detailed audit of the League’s finances would probably be in order, as it’s one thing to spend public funds on an advocacy organization that actually advocates, and quite another to spend public funds on an organization that has evidently become mainly a social club for leadership and staff. Sure, it’s fun for them to get invited to all the “cool” parties in Sacramento (if there even is such a thing), but our money is probably better spent on an advocacy group that isn’t afraid of “good trouble” and/or of sticking up for all of our communities.

In a fairly recent rebranding attempt – perhaps in an effort to seem more “relevant” or “hip” – the League now often refers to itself as “CalCities.” Until they get their act together, it should probably be known as “CalSwag” with the following slogan:

The League of California Cities: Great on swag. Not-so-great on local democracy.

Anybody need a desktop vacuum cleaner?

(John Mirisch was elected to the Beverly Hills City Council in 2009, and has served as Mayor three times. He is currently a garden-variety councilmember and a contributor to CityWatchLA.com.)