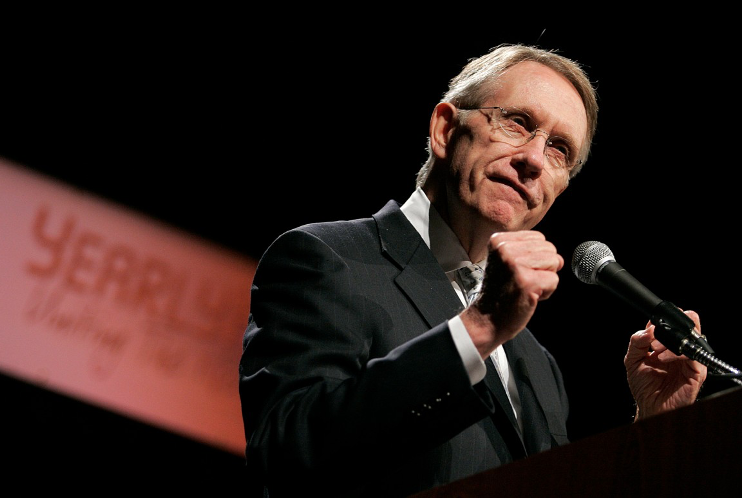 MARC's ANGLE - The articles released left and right about the passing of Harry Reid have induced head scratching moments and many times, cringe.

Ultimately when someone passes it’s indeed appropriate to look back on their accomplishments and as Senate Leader, he certainly was impactful. I will also give credit where due: he did not prepare a week long ceremony for us to have to endure through the mainstream media.

But it was the reaction of key voices in the public that compelled me to make a few observations.

For example, Harry Reid was referred to as a “conservative” by Yahoo News before that was quickly changed. This simple error highlights the sad reality of how far the left has gone if Reid is even thought of as a conservative. This was the same man who knew how to wheel and deal and took no prisoners. But for the most part he was consistently dedicated to pushing the liberal left agenda and was quite strategic about it. In no way was he a moderate and he definitely was not a conservative.

More realistically it goes to show how shallow most analysis is. Many political commentators don’t even know the issues. “Conservative” or “liberal” are therefore loaded terms and people might have taken a shallow part of his profile such as the fact he was Mormon to make that quick judgment. It remains foolish and lacks nuance.

The average American doesn’t even care about political figures. People say DC is Hollywood for the ugly people. While they don’t care about Harry Reid, they also didn’t care about John McCain.

But the political beltway crowd acts like everyone does. In fact, that’s the main part of the problem. It took an AOC to become someone in the Democratic side to actually break away from the echo chamber that is the political geek crowd. Slightly. Harry and counterpart Nancy Pelosi are barely thought about outside the political circles, despite being the official leaders. This is also why someone like Donald Trump was so feared. His message did get through to many groups especially minorities outside the politically engaged. They are now displaying a long term shift towards his version of the Republican Party. Harry Reid was never transformational in that regard, so writing about him in that way seems contrived.

But that’s the issue with the modern left. Many have rejected God in their lives, so government becomes their deity. But drilling down, the bigger issue is that those who want to remain without nuance when approaching issues, will reflexively vote Democrat. Yet this year it has finally affected us at the gas pump and in all of the cultural wars the woke want to drag us into meanwhile distracting us from the blessings of a harmonious multicultural country we have been for over a generation, so discontent despite the blessings, we are actually becoming regressive.

The more the Democratic beltway types talk about Harry Reid in these terms like he was supposedly this hugely impactful transformational leader, the more turned off people get. Because it’s fake.

So I simply urge everyone to lay off the drama, quit being extra and let’s be real about Harry Reid a technocrat, wheeler and dealer, who had a long career in government. Maybe longer than he should have been. May he Rest In Peace and my condolences go out to his family and loved ones.

(Marc Ang (marc@aib2b.org) is a community organizer in Southern California and the founder of Asian Industry B2B. He is focused on race relations and exposing tough truths and exploring nuance in the process. Marc’s book “Minority Retort” will be released in early 2022.)