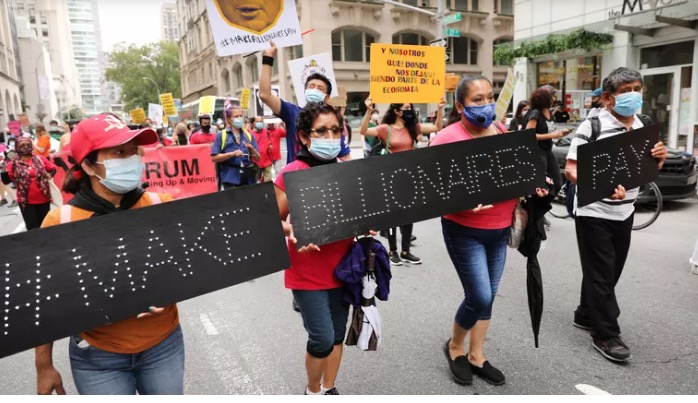 THE ECONOMY - Oligarchs of the dominate economic class in the United States continue to pour billions of dollars into the pockets of politicians.

The drift towards oligarchy was propelled in 1976 with the Supreme Court’s Buckley v. Valeo decision. It continued in 1978 with the Bellotti v. Bank of Boston decision and culminated with the dreadful Citizens United v. FEC decision in 2010. Politicians were deemed legally for sale to the highest bidder.

They are now steamrolling toward their economic goals almost unchecked. These goals are to not pay their fair share of taxes, eliminate government regulations that limit their ability to spike profits at the expense of working people and the environment, and to quash labor union organizing. The oligarchs appear to be winning.

Their agenda requires blaming the usual scapegoats for the chronic failures of our economic model. Then it depends on manipulation and deception of basic employment and poverty numbers reported by whatever administration is in power.

For example, the statement below is from the White House website this month by President Biden:

"Today, we learned that our private sector has recovered all of the jobs lost during the pandemic, and added jobs on top of that. This has been the fastest and strongest jobs recovery in American history, and it would not have been possible without the decisive action my Administration took last year to fix a broken COVID response, and pass the American Rescue Plan to get our economy back on track."

The federal government relies on the Bureau of Labor Statistics (BLS) to report the numbers on unemployment and poverty.

However, there are more accurate methods of reporting unemployment numbers and the economic realities burdening the vast majority of American working people particularly minorities:

A compelling organization is the Ludwig Institute of Shared Prosperity (LISEP). Their economists measure the rate of unemployment by the percentage of the U.S labor force that is “functionally unemployed.”

Using data compiled by the BLS, LISEP tracks the percentage of the labor force that does not work at a full-time job (35 hours a week) but wants one or does not earn a living wage calculated at $20,000 a year before taxes. The number $20,000 is astonishingly low when considering what is required to live a moderate lifestyle in most states.

Shadow Government Statistics (SGS) also measures unemployment from the BLS monthly numbers designated as U-6. U-6 includes short-term discouraged workers, marginally attached workers and forced part-time workers added to the standard unemployment rate of U-3. U-3 is the number most reported in the mainstream media despite its conspicuous inaccuracies.

U-6 is a relatively closer approximation of the unemployed, but still clearly incomplete in the totals. This is the result of the BLS inexplicably removing the category of long-term unemployed workers from their calculations in 1994.

However, SGS adds those numbers in this category back into U-6 and the results are striking.

Our economic model is failing a significant number of the middle class and the working class. Political strategies and tactics must be implemented that advance toward a democratic model and ameliorate the current state of the economy.

This approach must draw from our many spiritual and secular resources. It must address the deplorable disparities of income and wealth, and the accompanying immiseration of significant swaths of working people. A refreshing start would be to report the actual employment and poverty numbers rather than the predictable misrepresentations that are routinely dispensed. The numbers matter.