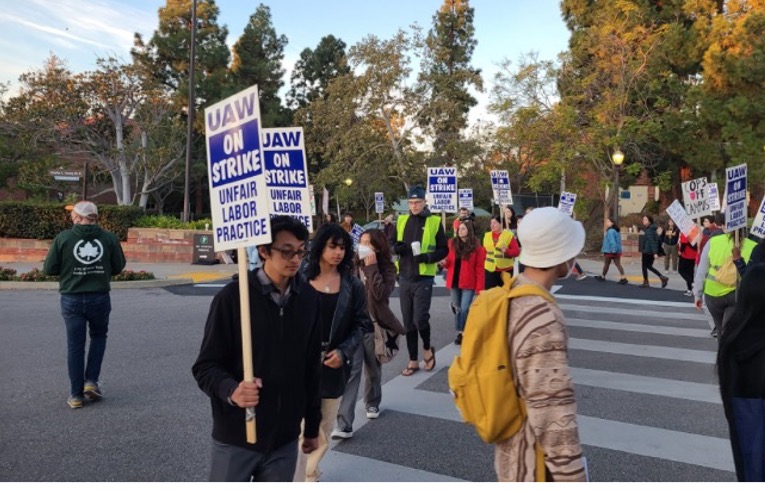 CAMPUS STRIKE - As the sun rises over the UCA campus, hundreds of UAW members from several bargaining units are on the picket line.

This is day four of their strike statewide at 10 Campuses, representing 48,000 researchers, Teaching Assistants and graduate students. The system is gigantic with 280,000 students and 230,000 faculty and staff.

This strike, a year and 50 bargaining sessions in the making, is the largest at any academic institution in history. The workers, perform the majority of teaching and research in the state’s premier university system. Their unified action, pickets, support from professors and overwhelming majority of students, triggered canceled classes, shuttered labs weeks before final exams. The strike also included workers at the Lawrence Berkeley National Laboratory.

Unionists are demanding significant pay increases, child-care subsidies, enhanced healthcare for dependents, longer family leave, public transit passes and lower tuition costs for international scholars. The majority of their members “rent-burdened,” or spending more than 30% of their income on rent. The unions are asking that pay be tied to increases in the local cost of living, including housing so that no one pays more than 30% of their salary toward housing costs.

Rafael Jaime, a UCLA doctoral candidate and president of United Auto Workers Local 2865, which represents 19,000 teaching assistants, tutors and other academic workers on strike. He told the LA Times, “If the university has a better proposal that seriously addresses the housing crisis, we’re ready and willing to hear it,” Jaime said.

“When you explain to students that this is a last resort, and they understand the conditions the TAs are going through, people are very understandable and receptive to why there’s a need to strike,” he said. “At the end of the day, UC has the ability to end the strike whenever they want to by negotiating in good faith and granting fair contracts to academic workers.”

At UCLA, Victor Narro, a labor studies professor said he and other professors have been sharing strike information in their lectures and classes, have taken their students to the picket line and have invited guest speakers from the union into class.

Omer Sohail, a researcher who like many makes $24,000 but has to pay a rent of $1600 a month, is forced to take a second job. He told this reporter that he also takes a full load of classes. “We have had support from the Ironworkers Union Local 433 working on building construction, and Teamster Local 2010 drivers who are refusing to cross the picket lines,” he pointed out. The Teamsters website heading says “Teamsters Stand in Solidarity with UC Academic workers” The California Federation of Labor and the LA Federation have both sanctioned the strike…and this includes the Building and Construction Trades council. There has been some negotiating progress on the transit pass and subsidy demands.”

Jared Brewster, UAW striker told Random Lengths newspaper, “After that was announced, around 16 workers walked off the job, effectively shutting down the construction site at the Luskin School of Public Affairs. Several other unionized workers refused to show up after spoken to the day before. The workers who walked off were members of : Sheetmetal workers local 105, Ironworkers local 433, Pipe and steel fitters union, UA local 78 plumbers, UA local 761 pipe and steam fitters. And we think operating engineers local 12, plasters union local 200, IBEW local 11 electricians just didn't show up because we told them there would be a picket line.

All the strikers know the current inflation rates nationally and the high cost of housing in LA that has resulted in more than 50,000 homeless in the city. “We want fulltime bargaining now,” he told me as background chants of “Picket lines mean don’t cross” reverberated and the picketers turned away cars and, buses and trucks.

The state Federation encompasses 2 million members and 1200 affiliated unions and Teamsters Joint Council 7 and 42 have said that their members can honor the picket lines. UPS drivers have been informed that they can refuse to deliver packages in California.

“California Labor is united. We stand alongside the dedicated academic workers who are so critical to the teaching and learning environment at the UC. It is outrageous that these workers make poverty wages at some of the wealthiest institutions in our state.” Lorena Gonzalez Fletcher, Executive Secretary Treasurer said, “We call on the University of California to do the right thing and agree to a fair contract and we will be out on the picket lines until that happens.”

Former UCLA unit chair of the UAW, Rachel Forgash, is on the picket line coordinating and dispatching strikers to various UCLA entrances. “I am a TA in the Political Science department, making $30,000 a year which is more than most and only because of my years of TA experience. Yet I am forced to live in a 1 bedroom, 600 square foot apartment run by a slumlord and travel an hour to work daily due to housing costs near campus.”

“UC is no longer the public institution but a barrier to making education equitable. There is a misconception that we, 4,700 of us at UCLA, are an elite group of people-but we have all worked hard to get here. And came here because it was in the past feasible to do graduate work.

This strike is gathering support as shown by these solidarity statements. The first from Chris Smalls, President of the Amazon Labor Union.

“University of California paying poverty wages to its workers is unacceptable and a direct attack against the working class. I stand with the workers on the picket line fighting for a better wage and better workplace conditions and I’m proud of them for hitting the pavement and making their voices heard.” Another in the unionization fight issued by Nanette Plascencia, lead organizer ALU, Inland empire at ONT8 Amazon warehouse.

"Paying people, a decent living wage should be the norm, the fact that people have to organize in almost every sector shows that workers are tired of being taken advantage of. ONT8 stands with and support’s UC academic workers strike for a better contract and fair bargaining."

Asked what she would ask of other unionists, students and residents, she said “Call and email UC chancellor Michael Drake (510) 987-9200, [email protected]) and demand a fair contract for us, a living wage. Come to our picket lines, bring messages of solidarity, spread the word about the issues in the strike.”

(Special report by Mark Friedman, veteran trade union activist of the International Association of Machinists and the California Teachers Association unions. As a former marine science teacher in an inner-city LA high school he developed a program to hook inner-city Black and Latinx youth in science through unique Marine biology courses and club.)