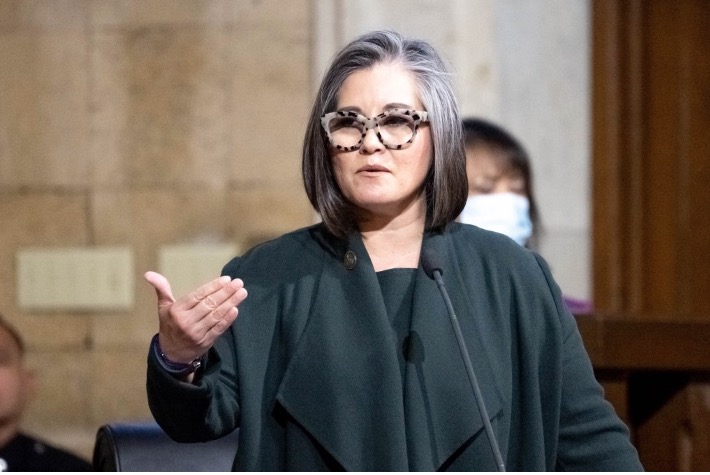 MARK, MY WORDS - Once a new car is past the warranty period, repairs become a problem of diminishing returns and when to finally cut your losses and trade it in. There is no finer example of a councilperson who, with the smugness of Marie Antoinette, brings to life that metaphor. I speak of our very own lemon, Monica Rodriguez of District 7. Between her enduring efforts to close an important community airport, her quest to de-fund, defame and dismantle law enforcement, her inability to civilly communicate with anyone who doesn’t bend a knee and an insatiable compulsion to promote herself over the needs of the community, she has somehow found the time to engage in Neighborhood Council sabotage.

With the help of her sycophantic fan clubs Pacoima Beautiful and the Department of Neighborhood Empowerment, Rodriguez is waging a cold war on our communities. In a seemingly endless parade of staffers and grease-palmed non-profs more eager to back whatever ill-conceived ideas the councilwoman foists upon us than pursue their mission statements, the future looks uncertain at best. With DONE, acting mostly as an obstructionist arm of the city that does more to silence independent Neighborhood Council voices than assist them, we are allowing the city foxes to guard their own hen houses.

Neighborhood Councils are intended to be the representatives of each community, a sort of “community union” giving the people a focused voice to address the often-deaf ears of City Hall. The City’s not so subtle efforts to centralize power over Neighborhood Council bylaws is no less than a political “anti-trust” takeover of a municipal government. Los Angeles allows each Neighborhood Council to draft its own voting rules based on the needs of each local community. These rules are voted on and that process must be left uninfluenced by the City in order to serve the many diverse communities in the 2nd biggest city in the United States. Without this independence, community voices vanish into a bureaucratic cacophony.

On April 14th, 2021, Rodriguez filed a motion singling out the Sunland-Tujunga Neighborhood Council and accusing them of engaging in “voter suppression” for requiring ID or some kind of proof of being a local stakeholder to vote in that community’s elections. This requirement is included in many Neighborhood Councils' bylaws in part due to past elections in which people were bussed in from other areas in order to influence the local election results. It bares mentioning, or perhaps shouting from the highest mountain, that STNC had one of the highest voter turnouts in the whole city yet was the only Neighborhood Council impugned in the motion. So, it appears, from a place of either arrogance or short sighted hypocrisy, Rodriguez has engaged in some election tampering of her own.

By singling out the STNC and inferring that requiring some form of ID is somehow racist or undemocratic, Monica has slandered and defamed members of the Sunland-Tujunga Neighborhood Council and eroded public trust in their local elections. With no evidence to support such allegations, and her dastardly deed now exposed for all to see, I will wait with "bated breath and whispering humbleness" until Rodriguez retracts her baseless and unnecessary motion and review the definition of voter suppression...while she is at it, perhaps she should give Freud’s theory of Projection a quick review. (Just kidding. I’m not going to hold my breath.)

A PRA request filed by stakeholders yielded no evidence to back Rodriguez’s unsubstantiated accusations of election voter suppression. Is there a defamation suit here? There should be. If Kevin de Leon can be tarred and feathered over an off-color comment, shouldn’t other council people be at least as culpable when they repeatedly show contempt for the public good and the needs of their

constituents? The city’s response on 01/04/2023 to the PRA request provided no evidence whatsoever that showed any voter suppression or inappropriate action from the STNC or any of its members.

A public apology or retraction would be an appropriate logical first step in repairing the ongoing dysfunctional relationship that Rodriguez has fostered with her constituents, but instead, true to form, she has decided to kick out the STNC from their long held office in North Valley City Hall, demand the removal of their storage items (forcing the tax-payer to pay for a storage unit) and prevent them from holding public meetings in the building by refusing to allot them the required time to meet. This is not an act of a steward of fair elections, but rather a habitually retaliatory bully with either no concept of the democratic process or a contempt for it.

Let’s just say it out loud...LA politicians are addicts and we, the voters, are their enablers, happy to feed their narcissistic addiction by electing them over and over again. We are too easily swayed by vague poetic speeches and swooned by empty promises spat out by forked tongues on corporate bully pulpits. With a record of campaign violations and antagonistic relationships with her constituents and staff, Monica Rodriguez has begun a new four-year reign of terror, once again lowering her bar of decorum and digging in her heels instead of burying the hatchet.

(Link to the Motion. Please read for reference. I particularly enjoyed reading between the lines)

(Mark Dutton is a lifelong musician, music producer, and writer. He was arguing politics with his parents since he was a pre-teen. Majored in psychology and left college in his 3rd year on a 30 year magic bus trip around the world playing and writing music with some of the best in the biz. Mark is a contributor to CityWatchLA.com.)