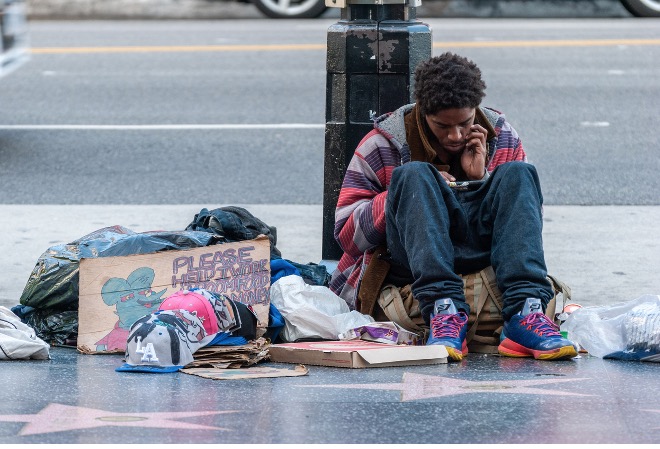 ACCORDING TO LIZ - Several studies have indicated that many homeless men suffer from traumatic brain injury.

Which begs the question: should Los Angeles have intervened much earlier to help those who Reagan turned out of mental hospitals in 1967 who drifted to encampments under freeway overpasses, begging on off-ramps?  Take a closer look at the underlying medical issues of those on the street?

The Lanterman-Petris-Short Act stopped the practice of institutionalizing patients against their will, or for indefinite amounts of time, but provided no medical alternatives for the growing population of people already living homeless in California, suffering from other physical and psychological challenges. Nor for traumatized veterans returning from Vietnam.

And the stress of living in this modern world with escalating costs and weakening social welfare support combined with the deterioration of family structure continues to wreak havoc on people prone to addiction. This has led to increased abuse of drugs and alcohol along with the financial inability of many to maintain a roof over their heads.

Another contributing factor has been the prevalence of a head injury.

Almost half of all homeless men who took part in a study last decade had suffered at least one traumatic brain injury in their lifetime and 87 percent of those occurred prior to becoming homeless.

While assaults were behind many of these brain injuries, a significant number were the results of chance accidents – whether from sports and other recreational activities, or caused by motor vehicle collisions and falls.

A second study revealed that the number of homeless or vulnerably housed people who have also suffered a brain injury runs around sixty percent, seven times the statistical norm.

This is not new information. The studies cited above (St. Michael’s Hospital as reported in Science Daily, and Jane Topolovec-Vranic et al as reported in the Canadian Medical Association Journal) date back to 2014.

And both these studies are from Canada where homeless people generally have access to better facilities and medical resources than in the United States but are still at-risk for a variety of other problems – both physical challenges and further mental deterioration that people are prone to when living on the street.

To that differentiation, we must add the consequences of PTSD in the men, still mostly men, who return from America’s multiple wars of aggression.

Organizations trying to help get the homeless off the streets need to be better educated on how traumatic brain injuries affect those who have suffered them, and of the links between such damage and mental health issues, substance abuse, seizures and general poorer physical health.

Instead of blaming these men, mostly men in this category of homelessness for their inability to support themselves in ways that our existing society requires in order to own or rent, we must recognize and address that injuries sustained in childhood or as young men may predispose them to being unhoused today. That living on the street may not be a conscious choice and that their being on the street can be the cause, not the result, of mental illness or substance abuse.

How much do we owe to the men who went to war for us in Iraq and Afghanistan, Korea and Vietnam?

Why hasn’t there been more in-depth work done in Los Angeles to evaluate the underlying causes that make life on the street more likely for some than for others? And find solutions that take the genesis of their disease into account.

There are a number of distinct sectors of those who no longer have the wherewithal to secure housing – PTSD, addiction, bankruptcy, psychiatric illness, domestic crises, the lack of resources to access what should be simple solutions to complex financial problems – often combined and too often contributing to further mental meltdown.

One-size-fits-all remedies don’t exist. We need to invest in addressing all the moving parts and acknowledge that it won’t be cheap and it will be messy. But can we afford not to take action?

Real action, not just politicians handing our taxpayer dollars over to developers.

But a difference exists in having the option to get help and being forcibly incarcerated as New York City’s mayor seems intent on doing.

Eric Adams’ draconian approach, which he claims is s moral imperative to care for those "in urgent need of treatment," is being called out as ineffective and harmful.

The New York Association of Psychiatric Rehabilitation Services pointed out that coercion itself – removing the unhoused however well-meaning the intention – is in itself traumatic.

As Angelenos have learned, there are no simple answers. There are no quick fixes. And nothing comes cheap.

Adams’ so-called 'compassionate' approach absolutely ignores the underlying needs that have led to so many living on the streets: quality health care for all (at a cost that won’t bankrupt families), permanent affordable housing, and community services that will help people from falling into such circumstances on one hand and rebuild their lives on the other.

What does the dictum aimed at doctors for the past centuries say? First do no harm.

The fact is that not only is his approach harmful to the currently unhoused in his city, Adams’ austerity budget measures may force many more New Yorkers to join them on the street.

Cities – Los Angeles and New York and all across the country – need to stop destruction of rent-controlled housing and build more, insist their states move towards providing free quality healthcare for all their residents, and develop robust community services to rebuild our neighborhoods and people’s lives.

And demonstrate real care and real compassion to those who have been physically damaged as well as those without the resources to succeed in our modern cities.

Otherwise Americans who can’t grab the golden ring to climb out of poverty will continue to slide the other way and fall right into homelessness.