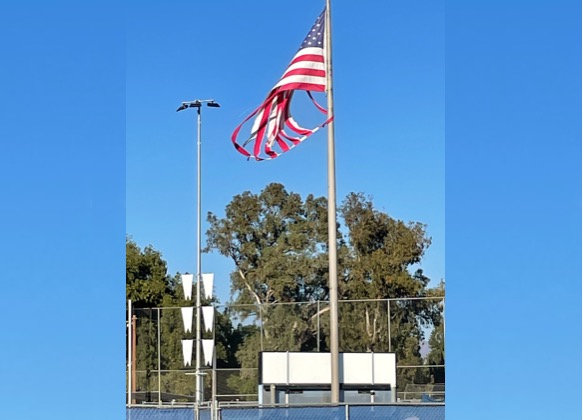 RANTZ and RAVEZ - Los Angeles City Councilmember Nithya Raman’s office fails to act and replace a worn and frayed American Flag at a park in her district after being notified by a Valley resident on September 19, 2022.

I was at Van Nuys Sherman Oaks Park on September 19 watching a friend’s children at soccer practice.  As I watched the practice, one of the fathers approached me and recognized me from my city council days.  The father brought to my attention a worn and frayed American Flag on the flagpole in the center of the adjoining sports fields that needs replacement. (See Attached Photo)  I looked at the Flag and agreed that the Flag needed replacement.  I saw the man email Councilmember Raman’s office from his cell phone regarding the condition of the flag and asked for a replacement noting that many children and parents noticed the unacceptable condition of the flag.  I was notified by the man on September 24 that the tattered flag was still posted and that contacting the councilmembers office did not have any impact on replacing the flag.  I phoned Councilmember Raman’s office on Monday and reported the condition of the flag to the chief of staff.  We will see how quickly the council office has the flag replaced.  I am also forwarding this article to the American Legion.

I will report if and when the flag is replaced by Councilmember Raman from District #4.

The latest number of LAPD sworn personnel remains at an unacceptable level at 9288.  Keep in mind in March 2018 there were 10,053 sworn officers on the LAPD.  The reduction of 765 police officers from the recruit to Chief has a negative impact on crime in Los Angeles.  This number does not include the civilian members of the Department who carry out vital functions for public safety including 911 dispatch and a host of other critical functions.

All Arrests Categories are down -11.5%.  Fewer officers results in fewer arrests and more crime victims.

Are you and your family safe living in Los Angeles?

How much Corruption is acceptable in local Government?

Los Angeles is an international city with interesting places to visit, shop and a variety of things to do.  In addition, traffic congestion during most times on freeways and many local streets; homeless living on sidewalks with stolen shopping carts from local markets and at bus shelters and other public areas around the city; day laborers soliciting work on street corners and crime patterns continuing to increase throughout the Los Angeles region. What are you to do?  You can put your head in the sand and go about your business and ignore the realities of Los Angeles or face the facts and deal with them until you become the next victim.

Now for the facts that some of you may have missed in dealing with many of the realities that may have passed you by.  If you have become a crime victim in Los Angeles, this message will resonate with you.  If you have avoided the impact of a gun pointed at you or a knife pulled on you or your vehicle stolen, you should consider yourself lucky and this should wake you up to the reality that you may be the next victim to call 911 and report a crime in Los Angeles.

Los Angeles has become a city of increasing crime not only on the streets but in those special places where elected and appointed officials sit in plush offices at City Hall and the County Board of Supervisors.  Those places where we send people to represent us and provide a quality of life for us and our communities.  The people we address in our letters as “Honorable.”  Well, for some time the FBI has been investigating elected officials and top staff and has discovered that not all local elected officials and staff are truly “Honorable” or honest at L.A. City Hall and at the County Board of Supervisors.

In addition to all the issues facing our region as far as people, jobs, safety, and the economy, we must add CORRUPTION to the review.  The most recent headline highlights ALLEGED corruption of County Supervisors Mark Ridley Thomas and Sheila Kuehl.  On the city level there is Mitchell Englander who already has pled guilty to CORRUPTION  and served time in Federal Prison and been released.  Then there are a host of other city hall officials including Jose Huizar, Ray Chan and others who called city hall their tower of power with loads of alleged illegal financial rewards.  Innocent or Guilty.  Time will tell and so will RantZ and RaveZ with the details.

(Dennis P.  Zine is the author of RantZ and RaveZ.  The column is published twice a month to keep you updated and informed of political activities in and around Los Angeles. )