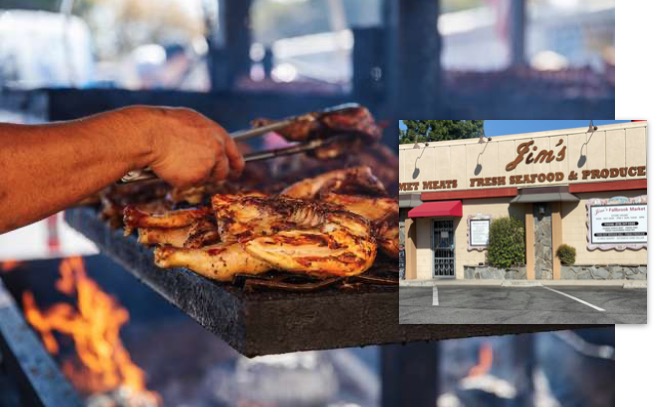 RantZ and RaveZ - Angry resident goes to court to shut down The Delicious BBQ food cooked outside Jim’s Market in Woodland Hills.

I will call the Woodland Hills resident who does not like the scent of BBQ “M.E.”  “M.E.” has tried for over 3 years to close down the weekend BBQ at Jim’s Market on Fallbrook in Woodland Hills.  I am using the initials “M.E.” to avoid any legal issues with this “WOKE” Valley resident who is not hesitant to use the courts for his complaint and personal gain.

It all began when West Valley resident “M.E.” decided to close down the friendly and successful weekend parking lot BBQ at Jim’s Market.  “M.E.” hired an attorney and the battle was on.  Litigation that involved a Lawsuit for the SMELL of the BBQ offending not the thousands of residents in the area, but Mr.  “M.E.”.  Of note, “M.E.” moved into the area years after the BBQ was well established in the neighborhood.

For the past 15 years Paul and Francine Varenchik along with their crew of hardworking cooks and associated team members have been serving up the best BBQ Ribs, Chicken, and other tasty meats on their huge old fashioned outdoor wood BBQ Trailer.  Slabs of tasty and seasoned Ribs and Chicken along with Hot Dogs and others BBQ items have been a weekend favorite for thousands of San Fernando Valley residents for many years.

I have visited the BBQ on many occasions with friends and we have always enjoyed dining on the tables outside Jim’s market or taking the food home or to the park to eat.  Sometimes during the summer Sunday Concerts at Warner Center Park.

The 50-year-old Calabasas custom Catering owned by Paul and Francine has been involved in hundreds of  outside events annually with no complaints or violations of the Health and Safety Codes.  Their customer appreciation is over the top and reminds me of those days long ago when business owners and customers always got along and worked together to succeed and find happiness in a great meal.

As the current case begins to wind down pending the verdict, the judge has ordered Paul to discontinue the BBQ at Jim’s market.  Being a resourceful businessman, Paul contacted El Camino High School and obtained permission to cook his delicious food in a parking lot at El Camino and transport the food to Jim’s Market for sales.  While this is a challenge for Jim and his crew, he is complying with the Judge’s order and still serving that great food to valley residents at Jim’s parking lot.

As this case winds down, it is reflective of one person who does not like something and complains about it over and over until they get their way.  In this case, I hope the Judge rules in Paul’s favor and tells Mr. M.E. to go pound sand!

If the judge rules against Paul, this could set a standard for many local restaurants that have the flavors of food permeating into the air from their air stacks.  Watch out “In and Out Burger” and “The Habit” and all the other restaurants that emit smoke from the delicious food they prepare for us to enjoy.

The “Woke” and out of touch elected 5 member L.A. County Board of Supervisors once again have demonstrated  their lack of concern for American Citizenship and those seeking a job with L.A. County.

The Board unanimously ruled that Citizenship is no longer a requirement for landing a job with L.A. County.  There are a few exceptions including law enforcement and those positions that require citizenship by state and federal law.

So, the former basic requirement of Citizenship to obtain a civil service job in L.A. County is removed by the 5 members of the L.A. County Board of Supervisors.

So, Supervisor Sheila Kuehl, who only represented the San Fernando Valley on paper but needed a map to find her way around the valley, will be gone and hopefully others will follow her into retirement and provide an opportunity for others with love for America to help lead the County to better times.

L.A. Mayor Eric Garcetti has served as a city councilman and now mayor.  With all his experience and world travel at our expense, one would think Garcetti is a shoe in to become the next Ambassador to India since President  Joe Biden has recommended his appointment.  Well, the confirmation process is taking a long time and some problems have emerged along the process.  Problems like a sexual harassment case that has hampered the appointment as Ambassador to India.

While time is running out for Garcetti, his parents hired a lobbyist to try and move the process forward.

Gil and Sukey Garcetti hired Breelyn Pete, a lobbying firm to assist Eric with the Process.  It is estimated that $30,000 was paid by the Garcetti family to push along the confirmation.

Not much movement to date.  We will wait and see the next move on the tales of Garcetti goes to India story….

(Dennis P.  Zine is the author of RantZ and RaveZ.  The column is published twice a month in CityWatch to enlighten you on issues impacting Los Angeles and America.  Dennis is a 54-year active member of law enforcement and a retired elected official.)