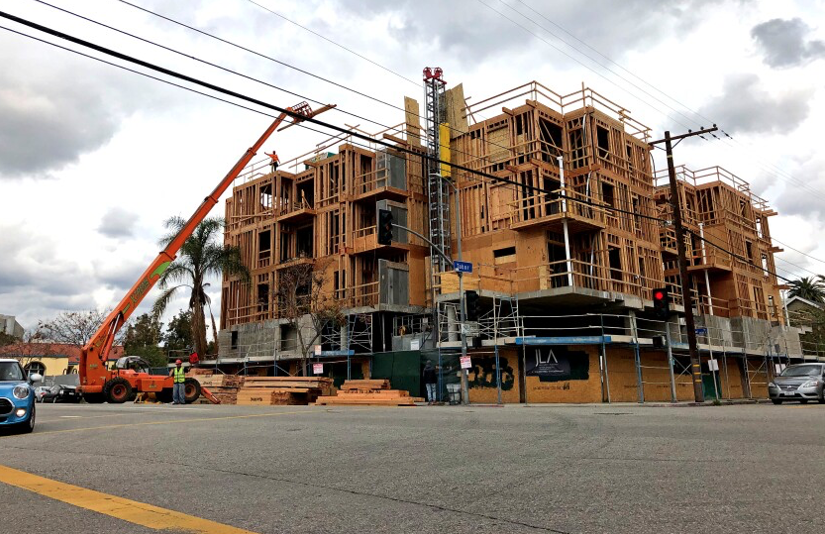 THE VIEW FROM HERE - They all falsely claim that Los Angeles has a housing shortage, when in reality we have tens of thousands more vacant units than homeless people.

On Thursday, March 18, 2021, one year into the pandemic, Andy Bales, president and CEO of the Union Rescue Mission in Skid Row, opined

For years, the city had an increase in domestic out-migration; that means people moved out of the city faster than Americans moved into the city. (While the county had more foreign immigration especially Asians, they often went to areas just East of the city of Los Angeles).

“IRS data shows that California’s net domestic out-migration tends to be strongest among households from 26 to 44 years old, ages that produce most of the children. The slowest out-migration rate is among those aged 65 and over.”   Oct 23, 2019, NewGeography,  Greater Los Angeles Area Growth Tanking and Dispersing, by Wendell Cox This trend has continued.  The reason is obvious.  The segment of the population which is between 26 and 44 were Family Millennials, the age group which is the number one home buyer.  As more younger Millennials want to start families, the more who move out of Los Angeles.  Since they obviously lived some where while in Los Angeles, each Family Millennial who departs creates another vacancy.  The tiny increase of Los Angeles city population, ca <.01, is due to births and the lower death rate of Baby Boomers. (born 1946 to 1969 75 yrs to 52, life expect 79).  Within a few years, Baby Boomers will start dying freeing up more housing.  At present, Los Angeles is experiencing a significant brain drain as Family Millennials leave.

Thus, every mayoral candidate lies to the voters when he/she says that there is a housing shortage.  Homelessness is not due to a lack of housing.  Rather, it is due to two decades of destroying poor people’s homes in order to construct non-rent-controlled units.  We have enough vacant housing to give every homeless person two apartments and still have thousands of vacancies.  Aren’t the voters entitled to the truth that the homeless crisis is not caused by our failure to construct new housing but due to years of destroying old housing?

The candidates’ pro-density mantra is nothing but fraud. Not only does the city have no housing shortage, but density jacks up housing costs to benefit a very few landowners.  The larger the complex which a developer places on a parcel, the higher the projected rents.  That makes the land worth more so that the next pieces of nearby land sell for more, which makes the landowner-seller wealthier, but once the more dense project is built, the more the developer earners.  Well, hmm, not always.  If a developer has to rely on Family Millennials, the developer is out of business since Family Millennials hate density and will move thousands of miles to Austin, Texas or Nashville to find a single-family home with a large yard.  Eventually, the various oligarchs and narco-drug traffickers, who thought LA real estate was a good investment for money laundering, will discover that principle does not hold true in a market crash.

Aren’t the voters due an explanation how many vacant units are being held as investment vehicles for oligarchs and narco-drug traffickers?

Without Family Millennials, Los Angeles Quality of Life Will Tank

The city council never concerns itself with the quality of life of average Angelenos.  All that matters to the councilmember is how much loot he/she can rake in from developers.  With term limits, councilmember being career politicos know that they need to build up a lot of good will with developers to have someone to finance their post council career ambitions.  Quality of life, e.g. with lots of parks, reasonable traffic, means nothing as it does not make money for a developer.  All they want is higher land values. There is no actual demand for ADU’s behind R-1 homes.  Rather they raise the property taxes while reducing the greenery which combats air pollution. ADUs aka Granny Flats hype housing costs as buyers think that they can afford to pay more for a home as they will get income from building an ADU.  This misconception goes into the comps so that nearby properties are listed for more.  By the time home buyers realize that they’ve been scammed it too late.  December 4, 2017, CityWatch, Granny Flats: How Corrupt Pols, Two-Bit Developers Destroy LA’s Middle-Class Neighborhoods

Another thing no mayoral candidate will admit is that the city is run like a 11th century feudal society of 15 fiefdoms.  Look at the April Fool’s Proposed Settlement by Judge Woker Carter. The housing is done on a fiefdom-by-fiefdom basis. See 4-1-22 Carter Notice, p2 “Council District Wide Engagement” As is standard procedure, each lord and lady has complete control what happens in his/her realm, which makes it much cheaper for the developer to curry favor to have his grossly oversized project approved.  Will any candidate say that no councilmember should be allowed to have an offshore bank account?