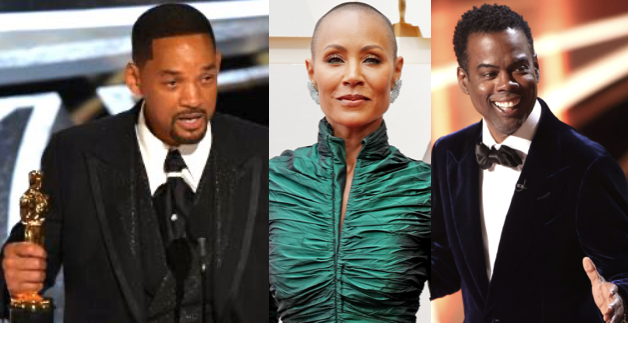 THE VIEW FROM HERE - In the 1950's game show, To Tell The Truth, three contestants tried to fool a celebrity panel as to who had done something unusual or had a strange occupation.

At the end of the questioning, the moderator asked, “Will the real ** please stand up?”

In the Oscars 2022 version, the three contestants are: (1) Will Smith, the Slapper, (2) Chris Rock, the Slappee and (3) Jada Smith, the Instigator

Will Smith, The Slapper

There’s no gainsaying who committed the criminal battery, but the focus is on the “real culprit,” that person without whom the incident would not have occurred.  Two persons’ actions preceded Will Smith’s coming on stage, Chris Rock and Jada Smith.  What role, if any, did they play in the battery?

Many people have ignored all the evidence and have invented the false narrative that Chris Rock did something to provoke Will Smith. It has become almost close to obligatory to at least say, “While Chris Rock should not have attacked Jada over her illness, Will Smith’s over reaction was . . . .”  As explained previously in CityWatch, Chris Rock said absolutely nothing inappropriate. His shout out was not derogatory but supportive and he did not even mention Jada’s alopecia.

As the initial video showed, The Slapper spontaneously laughed as did every other person in the room, except for Jada Smith.  Her eye roll and resting back in her chair and look at Will led some to believe that Jada wanted Will to do something. Upon his receiving this cue from Jada, Will Smith flips out, goes on stage, slaps Chris Rock, and then Will returns to his seat shouting profanities at a stunned Chris Rock.

While most people would expect a wife to be shocked to see her husband commit a criminal act on international television, a subsequent cell phone video shows that Jada laughingly delighted in it.

Jada’s alleged displeasure at Chris Rock directly contradicts what she herself has said about alopecia.  Jada and her friends had noted, many Black women have the bald-look and it looks great.  Her daughter, Willow, exuded, “You just look so good, and it is gorgeous,” to which everyone at the roundtable assented.  Jada had acknowledged she adopted the look at her daughter’s urging, tweeting, “ . . . my 50's about to be Divinely lit by this shed.” (There is a legitimate doubt whether Jada has alopecia.  Alopecia hair loss does not come out as a straight line.)

Jada’s Displeasure Had Nothing to Do with Alopecia

When Jada was prominent in boycotting the 2016 Oscars, Chris Rock came under pressure to likewise boycott.  Chris Rock hosted the show but tweeted “The #Oscars the White BET Awards.”  Jan 15, 2016.  Then, at the show itself, Chris Rock pointed out that Jada’s Oscars boycott was like his “boycotting Rihanna’s panties. I was not invited.”   As some on-and-off Hollywood gossip shows, Jada remained miffed by Rock’s piercing her use of the Oscars’ lack of Blacks for her own benefit.

But for Jada’s instigation, Will Smith would not have done anything other than laugh and the show would have continued.  From what we now see, Jada wanted revenge.  As her laughter shows, she though that she got it.

How Do We as a Society Handle this Incident

While some such a Tiffany Haddish praise the quick resort to criminal violence, the rest of society faces a far more complex situation.

The quick false narrative that Chris Rock did something untoward is part of the Blame The Victim Syndrome.  Our habit to rewrite events resulted in the Lost Cause Narrative after the Civil War, especially during the early 20th Century when so many monuments to Southern heroes were commissioned.  This cultural trait to re-write history is extremely dangerous.   With Chris Rock, the rewrite was close to instantaneous and has been virtually unchallenged.

The Hypocrisy is Overwhelming

The closer a movement is to one extreme or the other, the more hypocritical it becomes.  Trumpists, who believe that the government is controlled by Satanist child predators, justify mayhem in order to uphold the Constitution.  On a smaller scale, some feminists are justifying criminality as wonderful since women need to be protected by violent men.

A similar scenario has played out twice with ex-President Trump’s Senate impeachment trial. Twice Speaker of the House Nancy Pelosi has sabotaged the trial by depriving the House Managers, i.e. the prosecutors, of the required evidence. Although Senate trial was twice subverted in plain sight, no one wants to admit reality.  The law professors in December 2019 tried to stop Pelosi, but she did not heed them.  Why should she? Her personal career benefits as long as Trump is viable; Trump is her best fundraising tool.

A Similar Hypocrisy May Afflict the US With Ukraine

While we talk the talk against appeasement of Putin and have taken some actions, appeasement still appears to be Biden’s ultimate plan.  According to US Secretary of State Tony Blinken, the US merely supports Zelenskyy and if Zelenskyy wants to allow Russia to occupy Eastern Ukraine, the US will support Zelenskyy.  What we hear from Zelenskyy and military analysts is that Russia is in retreat and in reorganization and now is the time to provide massive military aid in order to rid the Ukraine of the Russians.

As a nation, we are great at the instant rewriting of history, hypocrisy and lethal self-deception.  To date, no one admits that the real culprit who instigated Will Smith’s criminal act was Jada.  No one will admit Pelosi subverted two Senate trials.  Our failure to provide Ukraine the massive military support now will be falsely recasted as our supporting Zelenskyy’s desire to cede territory to Putin.