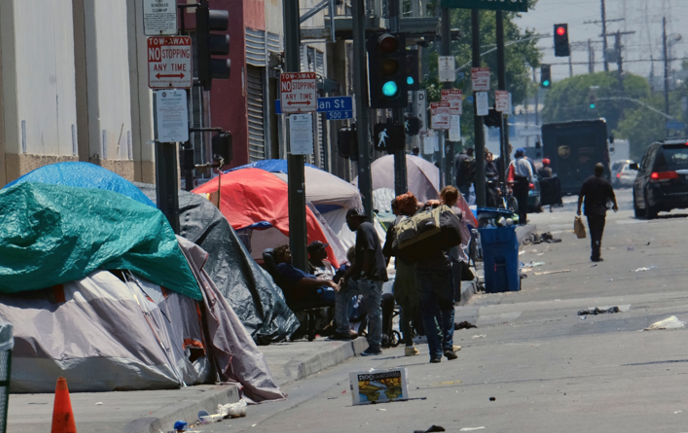 UNHOUSED - I’m @rooflesser and I live in public in LA.

I want to talk about the way EmpowerLA Neighborhood Councils interact with unhoused people, how they could interact with us, & how I wish they would.

For the past two weeks, she has been pushing an empty baby carriage around our neighborhood…

Not even a month ago, “Mary” was about ten months pregnant, living in a homeless encampment, just like the one I live in.

Her boyfriend finally got them a housing voucher, after months of trying. They thought the hard times were almost over.

5,000 unhoused mothers give birth in LA per year.

Then, they could not find anywhere that would accept them.

They thought they would be leaving their encampment on their own, for someplace better, like an apartment, together, with their child.

But, a few housed neighbors were fixated on getting their encampment abated, or “swept”, despite our Councilwoman’s firm, dissenting opposition to violent encampment sweeps.

Especially in the absence of available housing, the US Supreme Court agrees that punishing poor people for resting in public is “cruel & unusual”. Our Councilwoman, Nithya Raman was one of two out of the fifteen LA City Council Members who consistently voted NO on all LAMC 41.18 motions that banned sitting, sleeping, and laying down — “camping” — in certain public “Sensitive Zones”. It’s why we enthusiastically voted for her.

Our housed neighbors urgently wanted to make Mary’s home into one of these zones.

Well, the Councilwoman finally caved to the vocal owner-displacers, and a sweep was coming up quickly.

It was arriving almost as fast as their baby…

Mary’s water broke when she was home alone at their encampment, so she got on a bus to the hospital, as you do, when you’re overdue. Her boyfriend returned & panicked when she wasn’t home.

A woman that I met through our Neighborhood Council — the only other person who actually has lived experience, because of living in her car — was kind enough to drive him to the hospital to be with Mary.

She had been checking on Mary more as her due date approached, & they quickly put it together that Mary left the encampment in a hurry.

They did the same, knowing that it might not be there when they returned.

You would think this type of conflict would warrant a scheduling change, right? I mean, babies arrive when they arrive. Everybody knows that.

Nope. Not a chance.

There’s no mercy whatsoever for Mary OR her child — not even this close to Women’s Month. When you are unhoused, you’re somehow both hyper-visible and invisible. Everyone complains about you, but no one talks to you. No one hears you. No one cares.

Unfortunately, Mary tested positive for COVID while she was in the hospital, so when he got there, her boyfriend could not even be with her or their baby. It was gut-wrenching.

It also made them ineligible for even the 8’x8’ double-occupancy “tiny houses” that were supposedly offered to people living in some encampments in CD4 that had been scheduled scheduled for “resolution”…an offer that only became available to them because of the impending “sweep”.

Even without the COVID conflict making them ineligible, I’m not sure the baby was ever invited to live in the Tiny House Village with Mary & her boyfriend. They would be able to have their brand-new baby with them if they could just get a home with their voucher.

They were so close to being a perfect little housed family in a stable, affordable apartment or Tiny House. Yet, they kept getting rejected: from landlords, buildings, the hospital, from interim housing, & now, from their own encampment — which is a PUBLIC SPACE.

How did all the rejection they were experiencing get twisted into a narrative that they were rejecting offers of housing?

When Mary was released from the hospital with COVID and without her baby, she returned to the place that she made into a home with her boyfriend during the late stages of her pregnancy. There was no evidence that they had ever existed there.

Mary’s home had been swept clean. Everyone was gone. Supposedly they were all put in to housing. Mary knew better than to believe the people talking FOR her old roommates.

She barely troubles herself with the narrative that she resists services because she’s too busy seeking housing after months & months of securing a voucher and growing a baby.

She doesn’t care what a bunch of stable, overly-housed people think about her… unless they’re her offering a unit she can pay for with their voucher. That’s what she really needs from them.

Mary doesn’t think she needs services or interim housing apart from her child. All she needs, in her eyes, is a landlord.

Well, that used to be all they needed, like three weeks ago. Now she didn’t have clothes, or a blanket, or an umbrella.

It was going to rain, her home was gone, her baby was gone, & her meager possessions would never be seen again. Her boyfriend + his worthless voucher — like Charlie’s “Golden Ticket” to the Willy Wonka Candy Factory — which is supposed to afford them an apartment, the equivalent of winning the lottery for the unhoused family; they were nowhere to be found.

She sought refuge from the rain under a bridge where I lived in 2017. It was there that I experienced my first sweep. I still consider returning whenever it rains. It was really cozy, compared to anywhere else. You could stay dry and take a nap. It felt safe — almost normal — sometimes. I had a bed, bookshelf, dresser all suspended on the catwalk of the bridge, like a loft, before CalTrans bulldozed it…still, for several months, I felt like I had all the components of a real home — especially — in the pouring rain.

The woman from Neighborhood Council had found Mary’s boyfriend completely beside himself, distraught. Neither of them could find Mary anywhere. They reached out to me, & I suggested my old bridge. Sure enough, she was there.

And now that they have each other again, but little else, they can be seen pushing a stroller, walking aimlessly, like they are lost; too afraid to attach to any place & too untrusting to allow themselves to experience any more loss.

I’m still doubtful that they were ever offered anything, or that they would reject housing or services, if an offer was made. You wouldn’t know that if you listened to all the people talking for them, about them. You would think that they got housed and lived happily ever after…The End. Because that makes it seem like stealing from the poor is good for them, actually. It’s really about as low as clubbing baby seals.

It also perpetuates the narrative that stealing from the poor is okay if you ask them a riddle and give you the “wrong” answer. This isn’t Monty Python. This isn’t Robin Hood. Sweeps are Robbing the Poor, with some mental gymnastics added to make it sound less…icky.

Around 1 in 5 unhoused adults that moves into Permanent Supportive Housing experienced youth homelessness.

UCLA determined 4.4% of enrolled LAUSD K12 students — at least one child per classroom — experienced homelessness or precarious housing during the school year.

With 1,081 vacant homes, FIVE PER UNHOUSED PERSON, in our ZIP code alone, why do I still have no solution for the NEXT Mary, like I didn’t have one for the many Mary’s before her?

One of which delivered her own son under a different bridge nearby, & another “Mary” who lived opposite me under our bridge, that delivered her child in a hospital, but too early for it to be viable. She cried for months, then she left town & the father died of sepsis last May.

And yet another “Mary”, who had supposedly been spotted near our bridge, according to LAPD, who thought I would tell them where they could find her. I told them the truth, that I had not met her, but if I should, I would advise her to go to the Downtown Women’s Center, because it’s a SAFE PLACE (with a No Police policy) that is supposed to be equipped to deal with people in her situation.

The real truth is that no one is equipped to deal with Mary’s situation. When I was getting services from DWC, I witnessed several women go through the agony — that 5,000 expecting mothers in in LA do EVERY YEAR — of displacement while pregnant. The 5,000 resulting babies born unhoused nearly all will get housed, at some point, before age 18.

Then, the frequency of homeless people by age spikes because of “The System” that leaves many to their own devices once they turn 18.

A study by UCLA found that there are 68,000 unhoused LAUSD K12 students, a population that does not overlap with the annual LAHSA PIT number, which is also 68,000. If you’re keeping track, that means LA has at around 140,000 people who have been identified as homeless through manual counting…

SO WHY DOES A BRIDGE, A RAMP, FOR A HIGHWAY — FOR CARS — REPRESENT MORE SAFETY TO DISPLACED WOMEN THAN ANY OF THE OFFERINGS OF AND BILLION-DOLLAR-A-YEAR SYSTEM DESIGNED TO PROVIDE HOUSING TO US?

What is our Department of Transportation, CalTrans, & our deceptively-named CARE/CARE+ team doing, destroying the blankets that were laid down by Mary as the only soft place in her word as she was welcoming, then mourning the loss of what had been her world for nearly ten months prior?

Why is the only infrastructure that Mary has to keep her dry while she recovers from the trauma of giving birth with COVID, all alone, something that serves a purpose as far removed from “human habitation” as a FREEWAY?

Our neighbors DEMANDED from our Councilwoman that Mary’s home be abated. They literally convened to hold Neighborhood Council Sub-Committee meetings about encampments within the past month. Why didn’t they make an Ad Hoc Committee dedicated to finding a landlord who would accept Mary’s boyfriend’s Voucher, back a few weeks ago, when that was “all” they needed from us, their neighbors?

WHY DO I STILL HAVE NOTHING TO TELL THE NEXT MARY, OR THE NEXT…?

With over 1,600 unhoused people dying in LA last year, we are still creating homeless people far faster than we are losing them.

Homeless adults die in their 40’s, 35 years sooner than their housed counterparts.

Their autopsies would show the worn-out, tired hearts of people twice their age, if the Coroner bothered to perform autopsies on people who were found deceased in tents and near freeways — like my friend.

My friend survived COVID after weeks in the ICU, with his wife…just to make her into a widow a few weeks later.

He was 57, a decade older than the average unhoused person in LA’s expected lifespan, but still “too young” to be considered for Project Roomkey.

This couple had been unhoused in our neighborhood together for decades, but when he was found under Campo de Cahuenga, Patch.com called him “The Body of a Transient”. I was humiliated FOR them about this, when my sympathetic housed friend sent me crucifixion imagery captioned “Body of a Transient”.

His wife was so distraught that she got kicked out of Project Roomkey, which she ended up getting “lucky enough” to secure, after all. If only it had been just a little bit sooner.

She’s still homeless around here. My significant other helped her carry her groceries “home” to a park about a month ago, after she was evicted from another bridge.

The fact that Mary’s Neighborhood Councils are continuing make the choice to use their energy, resources & people power to take away one of the few things that “Mary” still has — her Constitutional right to public space — despite the Councilwoman already taking a firm, clear opposition to LAMC 41.18…. It makes me want better people. Be better. Thank you.

(This article was written by @rooflessruth)