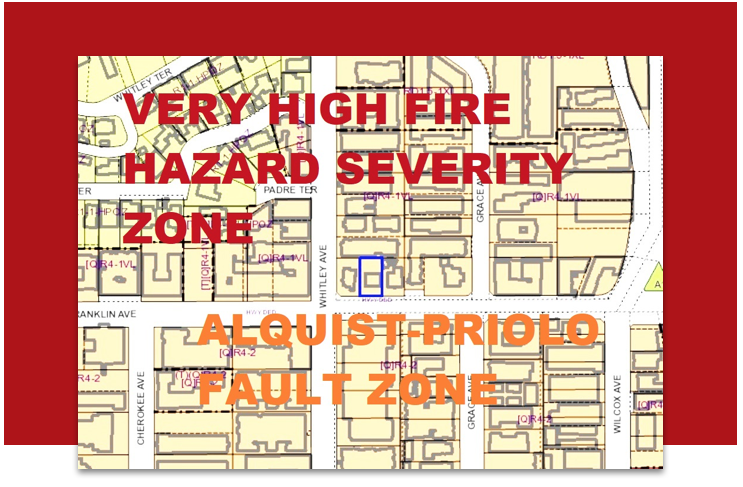 And of course, the threat of an earthquake is always present in Los Angeles.  So you might expect the City of LA would want to plan new development carefully, to avoid putting citizens at risk.  Unfortunately, that would be expecting too much.   LA City Planning and the LA City Council seem increasingly reluctant to address problems with proposals for new projects.

One of the most glaring examples of LA City Planning’s recklessness was the recent approval of the 28-unit apartment building proposed for 6555 Franklin Ave. in Hollywood.  The City deemed the project exempt from the California Environmental Quality Act (CEQA) and filed a Notice of Exemption (NOE). Along with the NOE, the City published a document which gave the justification for the exemption.  Here’s an excerpt:

The NOE justification goes on to say….

“According to ZIMAS, the project site is not located within the Alquist-Priolo Fault Zone but indicates that the site is located within 1.40 km from the nearest known fault (Puente Hills Blind Thrust).”

The first problem here is that the project is, in fact, located within a Very High Fire Hazard Severity Zone (VHFHSZ).  This is clearly indicated on ZIMAS, the City’s zoning information web site.  The second problem is that the project is also located in an Alquist-Priolo Fault Zone.  Again, ZIMAS says so.  And what’s really bizarre is that the NOE justification states that “the site is located within 1.40 km from the nearest known fault (Puente Hills Blind Thrust).”

Why is this bizarre?  Because the Puente Hills Blind Thrust doesn’t come anywhere near Hollywood.  It actually runs east of Downtown, many miles away.  And somehow the CE justification doesn’t say anything about the Hollywood Fault, which, again according to ZIMAS, is about 0.17 km from the project site, or a little over 550 feet.

A local group, the Franklin Corridor Communities, appealed the project, citing a number of concerns, including the false statements about the VHFHSZ and Alquist-Priolo.  City Planning published a response.  Here’s what they had to say:

and it is also within Alquist-Priolo zone, and liquefaction area, according to the Department of

Now, you might think that the last sentence indicates that they were going to revise the justification to acknowledge that the project was in a VHFHSZ and an Alquist-Priolo Zone.  Unfortunately, no.  Here’s the revised language from the altered document.

“Moreover, based on a review of the data reported on the Department of City Planning's

ZIMAS for the subject property, the site is not located within an Airport Hazard Area,

Landslide Zone, or Preliminary Fault Rupture Study Area. According to ZIMAS, the

Grading. As such, exception (a) does not apply.”

Instead of acknowledging the VHFHSZ and Alquist-Priolo, they just delete any mention of them.  That’s City Planning’s approach to dealing with information they’d rather not talk about.  They just pretend it doesn’t exist.  And while they’ve removed the reference to the Puente Hills Blind Thrust, there’s still no mention of the Hollywood Fault.

I wrote a letter in support of the appeal, and in it I mentioned the fact that references to the VHFHSZ and Alquist-Priolo had been deleted.  And I was wondering how the City would deal with this issue when the appeal was heard before the LA City Council’s Planning & Land Use Management (PLUM) Committee.

Not surprisingly, they pretended the issue had been fixed when it hadn’t.  City Planning staff spoke at the PLUM hearing to recommend that the appeal be denied.  When it came time to address the fact that the site was in a VHFHSZ and an Alquist-Priolo Zone, staff said, “Staff acknowledges that the project site in those zones, uh..., staff has revised the CE 32 written justification for the project file to reflect that.”  This is false.  City Planning originally tried to deal with this issue by altering the justification to remove any reference to these issues.  But they may have gotten nervous about posting the altered document, because the version they posted to the council file is the same one they started with, which still says the project site is not located in a VHFHSZ or an Alquist-Priolo Zone.  And, to make things even more absurd, this means they’re back to stating that the nearest known fault is the Puente Hills Blind Thrust.  To read the version posted in the council file for yourself, just click here, and scroll down to page 7.

One of the appellants’ concerns was emergency access.  They pointed out that Franklin Ave. is often extremely congested, and that if a fire or an earthquake occurred during peak traffic times evacuation could be a huge problem.  Anyone who’s driven Franklin during rush hour, or when a big event is being held at the Hollywood Bowl, knows that traffic can be backed up for blocks.  And because Franklin only has one lane going in each direction, access for emergency vehicles could be problematic.  Speaking on behalf of the appellant, area resident John Girodo talked about how difficult evacuation could be if an emergency arose.  Apparently, the residents’ concerns about this issue made no impression whatsoever on the PLUM Committee members.  They voted to deny the appeal with absolutely no discussion.

It’s not unusual for City Planning to publish environmental documents with glaring inaccuracies, but the games they’ve played with the justification for this exemption seem to be crossing new lines.  First they publish a document with information that’s clearly false.  Then they say that they’ve revised the document, without mentioning that they’ve simply deleted information that could be problematic.  Finally, City Planning staff claims during a public hearing that the document has been revised to acknowledge the deficiency, when actually they’ve posted the original version with the same false info to the council file.

City Planning is supposed to be serving the public, yet in this case they seem to be going to unusual lengths to keep information from the public.  Is this acceptable behavior for an agency that’s supposed to be planning for LA’s future?

(Casey Maddren is a CityWatch contributor.)