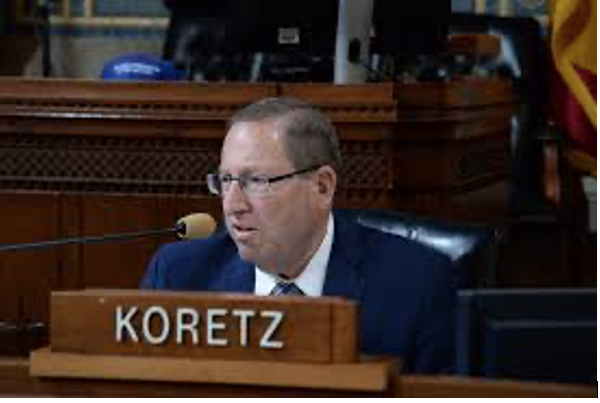 RantZ and RaveZ - In 1975 Paul Koretz began his career in California politics.

He worked for L.A. Councilmembers Zev Yaroslavsky and Marvin Braude.  In the 80’s Koretz worked on the establishment of the City of West Hollywood and his election to the West Hollywood City Council.  Koretz then moved to the California State Assembly where he served six years.

In 2009 Koretz was elected to the Los Angeles City Council where he remains.

Koretz is currently running for Los Angeles City Controller.  If elected to that office, his time in the political world will be 55 years.

The City Controller is responsible for serving as paymaster, auditor, and chief accounting officer of the city.  The Controller is required to exercise general supervision over the accounts of all officers and departments of the city including Airports, DWP and Harbor.  All payments must be approved by the Controller.  The Controller also prepares the official financial reports for the City and is responsible for financial and performance audits of all City Departments and programs.  The duties require Integrity, Honesty, and Accountability.

Does Koretz have the ethics and values needed to serve in the position of Controller if he knowingly permits a City Commissioner to host a fundraiser for his campaign at her residence in Direct Violation of the L.A. City Ethics Rules?  You be the judge.

We know there are currently MULTIPLE FBI Corruption Investigations underway at L.A. City Hall.  Including the L.A. DWP where the host of the Koretz fundraiser is a current long-time DWP Commissioner.  With his political experience how can Koretz justify participating in a fundraiser for his Controller’s campaign at the DWP Commissioner’s home?  If Koretz doesn’t know the basic Ethics rules after years serving as an elected official, how can we trust him to perform the duties of Controller.

As far as the DWP Commissioner that hosted the fundraiser, we will see what the Mayor and Ethics Commission has in store for her.

It will be interesting to see if the Commissioner hosted other fundraisers for other political candidates running for L.A. offices.

This case is not over….

The current LAPD sworn personnel numbers are shrinking rather than growing.  On Jan 22, 2022, the LAPD number of sworn personnel was reported at 9515.  The Feb 19, 2022, numbers show a shrinking number of 9505 sworn officers.  The result is fewer officers available to handle calls for services and patrol the streets of Los Angeles.

If you are the victim of a Crime, Burglary, Theft, GTA or any of the other crimes,

It is very important to file a Police report. Police patrols are coordinated based on crime stats and crime trends, and those are determined by crime reports.  When you fail to file a crime report with your local Police or Sheriff’s Department, the patrol officers have no idea of crimes in your neighborhood.  The result is fewer officers in your neighborhood providing visible patrol.

It doesn’t matter if it’s your bicycle that is stolen or any other item.  Filing the police report is most important.  In many cases you can file the report over the internet or by telephone.

The Recall of L.A. County District Attorney George Gascón continues with millions of dollars raised and thousands of signatures obtained to remove him from office.

Los Angeles County voters are strongly supporting the RECALL of District Attorney George Gascón from office.  Thousands of registered voters are signing the Recall Petitions at venues throughout L. A. County.  If you have been following the news reports on Gascón, you will find that his own deputies recently voted to support the recall.  Over 97.9%  of the Deputy District Attorneys voted to recall Gascón from office.  Additionally, former LAPD Chief Charlie Beck pulled his endorsement for Gascón along with Mayoral candidate Rick Caruso.

I urge you to sign the Recall Petition.  Petitions can be obtained on the internet by going to www.RecallDA George Gascóm.com.

I am co-chair of the Recall Gascón campaign.

Praying for an end to the WAR in Ukraine.

I have been watching innocent people living in fear with Russian troops occupying Ukraine.  I hope this WAR will come to an end before there is more bloodshed.

I pray for peace and an end to this War.

(Dennis P.  Zine is the author of RantZ and RaveZ.  The column runs twice a month to bring you a unique view of the ups and downs in and around Los Angeles from a combined 54 years of Law Enforcement and Elected Officials’ perspective.)