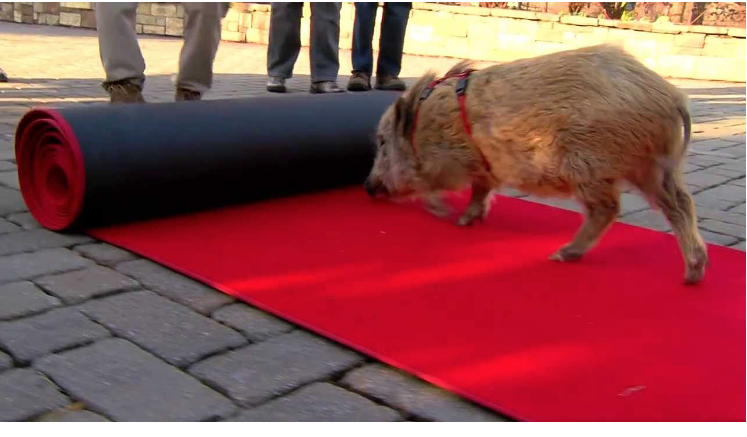 PLANNING WATCH - The State of California’s Department of Housing and Community Development (HCD) has approved seven new local Housing Elements and rejected 190 others, including the unabashed pro-development Los Angeles Housing Element, adopted by the City Council in November 2021.

HCD’s rationale is not easy to understand.  The State agency wrote L.A.’s Director of Planning Vince Bertoni that the Housing Element would meet, “The statutory requirements of State Housing Element Law once it has been revised and re-adopted to include metrics and milestones to target significant and meaningful affirmatively furthering fair housing (AFFH).”  It appears to say that L.A.’s recently adopted Housing Element must be revised to include, “Specific actions that foster more inclusive and equitable communities in Los Angeles that replace segregated living patterns.”

This HCD directive is based on the evidence-free theory that LA’s housing patterns and the State’s homeless crisis result from a housing shortage caused by zoning laws.  Once these zoning laws are rescinded, according to this theory, private real estate developers will build more housing, and the ensuing boomlet would end homelessness and segregated housing patterns.

As Forrest Gump said, “Stupid is as stupid does,” and this planning theory certainly qualifies as stupid because homelessness and ethnic housing patterns are not caused by a housing shortage.  In fact, according to the Bureau of the Census, in 2020 the nationwide vacancy rate was 9.7 percent.  Since vacant houses and apartments are often in areas where people prefer not to live, a more relevant figure is local vacancies.  In Los Angeles, a local real estate agency, Apartment.com, lists 21,000 vacant apartments immediately available to tenants.

A closely related question is whether zoning deregulation will actually result in a housing boom, and if this boom will end residential segregation.  Like homelessness, there is no evidence that more speculative private sector housing would reduce racial and ethnic housing patterns in Los Angeles.

While Los Angeles had widespread redlining by banks prior to the 1968 Federal Fair Housing Act, the Brookings Institute carefully assessed the long-term impacts of racial redlining in Los Angeles.  In 2017 L.A. neighborhoods that banks originally redlined had 581,015 non-Black residents and 40,285 Black residents.  Clearly, from the heyday of redlining in the 1930s to the present, LA’s once racially segregated neighborhoods desegregated on their own through legal, social, and market forces.

How the local Housing Element’s up-zoning programs –- accelerated by the State’s recent letter -- would impact these trends is hard to predict.  But we can assume that some real estate investors would take financial advantage of the Housing Element’s up-zoning programs.  They are likely to build gentrifying upscale apartments in once red-lined areas, especially in those near job centers and mass transit.  In fact, the upmarket Cumulus District, at the intersection of LaCienega and Jefferson, is close to many high-tech offices and an Expo Light Rail line station.  It will be a test case for the impact of densification and gentrification on homelessness and neighborhood ethnic and racial patterns.

The Cumulus District is a luxury complex.  It features a Whole Food market, amazing views, multiple pools, and outdoor yoga studios.  Rents for a one bedroom apartment range from $4,049 to $5,147 per month.  Two bedroom units start at $5,248 and soar to $16,569/month.  Only that tiny fraction of Angelinos with super high incomes could afford to rent these new apartments.  Based on the guideline that tenants should spend no more than 30 percent of their income on housing, a renter would need an annual income of $210,000 to lease the cheapest Cumulus District two bedroom apartment. 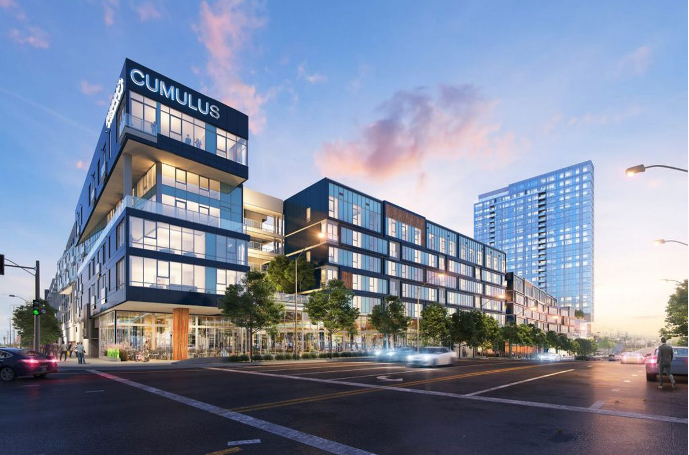 Rendering of upscale Cumulus District, at LaCienega and Jefferson.

According to Zip Recruiter, the median salary in Los Angeles is $68,000 per year, and the top 10 percent make, on average, $144,000 per year.  Those with pockets deep enough to rent a Cumulus apartment would gentrify local neighborhoods by income and, in most cases, by race.  Most existing residents would eventually be priced out, and the well off, mostly white newcomers, would ironically desegregate this neighborhood through gentrification.

Whether the City of Los Angeles sticks with its existing zoning ordinances, its recently adopted Housing Element, or the accelerated up-zoning and monitoring that the State requires by October 2022, private developers will not build more than a token amount of the 600,000 needed low-priced units.

This is why.  The existing zoning buildout numbers for Los Angeles vastly exceed the Housing Element's increase in zoned capacity.  Nevertheless, few private developers build by-right low-priced housing, even with vast amounts of untapped zoning capacity just sitting there, most of it on transit corridors.  Nothing stops them from swooping in, demolishing existing buildings, and replacing them with new apartment or mixed-use buildings.

Second, if the Department of City Planning immediately up-zones much of Los Angeles to satisfy the State, they have not determined the levels of public infrastructure and services that the new housing and residents require.  This glaring omission makes the City vulnerable to lawsuits based on its willful violation of the General Plan Framework Objective 3.3.  This policy requires the City to demonstrate that a local area has sufficient infrastructure and public services prior to up-zoning.

Can this dead-end be avoided?  I doubt it. The State of California and the City of Los Angeles have dug a hole from which there is no obvious escape.  If they stick with the existing Housing Element, or if they jump start it with accelerated up-zoning and monitoring, they will reach the same dead end.  Homelessness and segregated housing patterns will get worse.

(Dick Platkin is a former Los Angeles city planner who reports on local planning issues for CityWatchLA.  He serves on the board of United Neighborhoods for Los Angeles (UN4LA) and co-chairs the Greater Fairfax Residents Association.  Previous Planning Watch columns are available at the CityWatchLA archives.  Please send questions and corrections to rhplatkin@gmail.com)