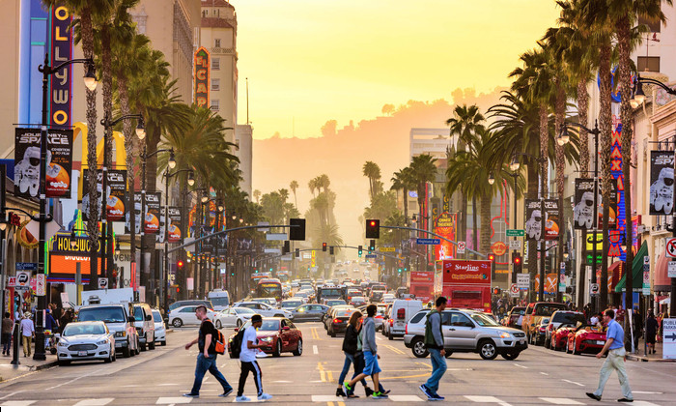 DEEGAN ON LA…The Radical Democratic Left may be left out of the crime conversation this Mayoral election season which is already shifting toward public safety as the signature issue for several prospective mayoral candidates.

The winners, at both the mayoral and councilmanic levels, could be politicos that know such restrictive slogans as “defund the police” and “all cops are bastards” are tone deaf to what LA citizens (and voters) are experiencing today.

The more centrist Democratic candidates take a more measured view. They are balancing public hunger for public safety against crime waves of every description. The radical left is being co-opted by centrist candidates.

Walking down Melrose Avenue, on their way to Fairfax High School, “Two unsuspecting girls were pulled down to the sidewalk by their hair and robbed of their phones, the Los Angeles Police Department announced.”

This incident made national news when the New York Post dented the iconic image of LA as a seventy-seven and sunny paradise. The City has now become more like a noir nightmare,  compounded by home invasion robberies, follow-home hold-ups, mobs of looters bursting into retail stores to rob them, and armed stick-ups in broad daylight, that have come to identify LA. Murder is also on the table.

Listen to these candidates and notice that their themes are almost identical:

A close advisor to Caruso told CityWatch that “Of all of the candidates, Caruso is the only one with real experience managing a police department and dramatically reducing crime rates as the result of his decision to hire Bill Bratton as LAPD’s new chief. The other candidates are all talking about things that they have never actually done.”

What about visitors to LA? In a few days, we will have thousands of out-of-towners coming to the Super Bowl. They will be looking for the best hotels, restaurants, stores and services. They will also be looking out for their safety in a city that’s making headlines for aimless crime waves of every description.

Even the new SoFi Stadium, where the big game will be played on Sunday, is a crime scene. An act of violence at a football game there just two weeks ago left a fan in a coma.

Collateral victims of the ongoing crime wave are the homeless. Until recently, they were the number one priority for political discourse, but that might have been eclipsed as the emotional issue of the day moves from compassion for them to anxiety about public safety.

With Councilmember Mike Bonin (CD 11) announcing he’s shutting down his reelection campaign to devote time to personal issues, the homeless have lost an advocate who was pushing back against the trending return of what leftists see as the criminalization of the homeless.

With Bonin (C11) and Ridley-Thomas (CD10) off the scene, two of the most diligent advocates for the homeless have left a vacuum that Kevin De Leon (CD14), another mayoral candidate, must fill as chair of the Homelessness and Poverty Committee of the City Council. Another Councilperson, Nithya Raman (CD4), also speaks up for the homeless, but is so closely identified with the Democratic Socialists of America, and the Radical Democratic Left, that what looks like an emerging centrist majority may soften her voice.

It may be too late now to turn this pro-police tide back: crime is here and now, and here and now is when politicos need votes in the lead up to the June primary election. A recognition of an absence of law and order, and solutions for reducing crime and fears about crime, could be factors that help to elect our next mayor.

“Stay safe” is suddenly not just a slogan connected to Covid.

Note: Rick Caruso was not an announced candidate at press time earlier today. The period in which all candidates must declare intentions to run for office ends on Saturday at noon.