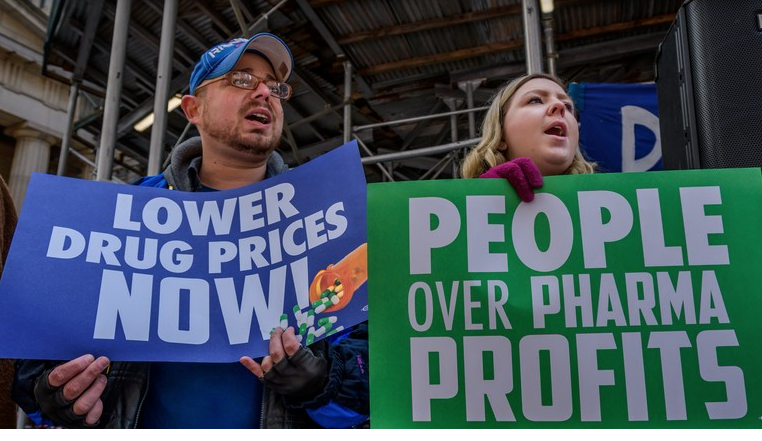 Bolstering calls for the U.S. Senate to pass the Build Back Better bill with drug pricing reforms, a House panel on Friday released a report detailing how Big Pharma has not only "raised prices with abandon," but also "manipulated the patent system" to suppress competition.

"The evidence overwhelmingly supports the need to pass the Build Back Better Act."

The final staff report is the culmination of a nearly three-year investigation by the Committee on Oversight and Reform launched under the late Rep. Elijah Cummings (D-Md.), who died in 2019. He was succeeded as the panel's chair by Rep. Carolyn Maloney (D-N.Y.).

"The committee has obtained more than 1.5 million pages of internal company documents, held five hearings, and released eight interim staff reports," Maloney noted in a letter at the beginning of the report. "The investigation has provided a rare glimpse into the decision-making of many of the world's most profitable drug companies."

Specifically, as a committee statement detailed, the probe revealed:

The panel investigated insulin products manufactured by Eli Lilly, Novo Nordisk, and Sanofi, and found that those companies "targeted the United States for price increases, and Medicare lost out on more than $16 billion in savings." The trio also "engaged in strategies to maintain monopoly pricing and defend against competition" from generic versions of their brand-name drugs.

The committee also looked into Pfizer's pain-management drug Lyrica, and found that the drug giant "targeted the U.S. market for price increases" and "used patent protections, market exclusivities, and other tactics to delay generic competition and keep prices high."

After outlining the panel's key findings in her letter, Maloney explained that "this staff report is intended to help Congress, regulatory agencies, and the public understand rising drug prices and pursue effective reforms to make prescription drugs more affordable."

"The evidence overwhelmingly supports the need to pass the Build Back Better Act, which will empower Medicare to negotiate for lower prices, restrain price increases, and cap out-of-pocket patient costs for insulin and other drugs," she wrote.

House Speaker Nancy Pelosi (D-Calif.) praised the committee leader Friday, saying that "thanks to the relentless leadership of Chair Carolyn Maloney, the Congress is carrying on the life's work of our dear late colleague Elijah Cummings: to bring down health costs for the people."

Alongside its new report, the House panel put out a fact sheet about the Build Back Better provisions intended to lower drug prices and cut costs for patients—some of which the speaker highlighted in her statement.

"With the House-passed Build Back Better Act," she said, "we are fighting back against this appalling conduct: ending unfair price hikes, empowering Medicare to negotiate for lower prices, capping the cost of insulin at $35 per month, and more."

While Pelosi and other party leaders are advocating for swiftly sending the Build Back Better bill to Biden's desk, because the Senate is evenly divided, passing the budget reconciliation package requires support from every single member of the upper chamber's Democratic caucus.

The Hill reports that when asked at the White House on Friday whether he could get Sen. Joe Manchin (D-W.Va.) to support the measure with inflation so high, the president said: "I don't know the answer to that. I'm going to be talking to him at the beginning of the week."

Biden added that "I think if you look at what most people, most of the economists, are saying, this Build Back Better bill is not going to increase inflation, it will diminish inflation."

(Jessica Corbett is a staff writer for Common Dreams, where this story was published.)