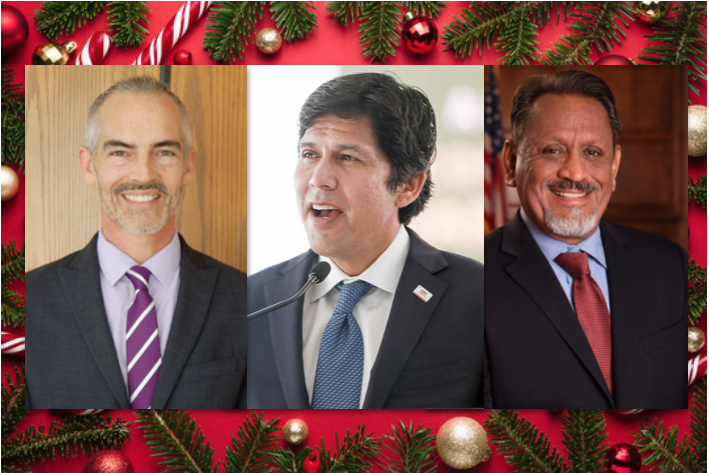 I thought it being the holidays and all, a little light hearted look at the follies by Northeast LA’s Councilmembers might be in order.  That would be Kevin De Leon (CD14), Gil Cedillo (CD1), and Mitch O’Farrell (CD13), to be exact.

I think Kevin De Leon takes the prize this time out.  First, you may remember a recent article by yours truly celebrating  how to do a real grassroots community based Thanksgiving giveaway, with the title Eagle Rocks' Thanksgiving Community School Giveaway.

In that article I mentioned that CD 14 Councilmember Kevin De Leon had also had a turkey giveaway the day before the community event, at the same venue.  Well, it turns out that I was partially wrong.  You see, Kevin himself was not present at his turkey giveaway event, probably running for Mayor or building his war chest  Instead De Leon’s  staffers  Alice Roth, Sarah Flaherty, and a community resident named Amanda House (aka Matti), handled the event.  I remember their names because neither Alice or her sidekick Sarah Flaherty respond to public records requests.

Three differences between the two Holiday events - first De Leon was a no show at his own event, second, using City funds to buy a bunch of turkeys for it, third they were handed out to whoever happened to be at or around the Target store at  the Eagle Rock Plaza, whether or not they even resided in CD14  And just for good measure, the gang didn’t even clean up after their event.

Even more fascinating, the historically cool Xmas event held annually in Eagle Rock has been pre-empted and will have taken place by the time you read this article.  It has been taken over, of course, by Kevin De Leon!  For those unfamiliar with the Christmas Tree Lighting event, it has been a long-standing community gathering, until the COVID-19 pandemic hit, involving the Chamber of Commerce, TERA, and other community organizations.

The ‘new’ CD 14 version of this Christmas event was to move the event from a Friday evening.  It has always (for the last 25 years) been held on a Friday evening as to allow school age children who attend the event not worrying about getting up early the next day for their classes.

As per Alice Roth, the event date changed so that it would not interfere with De Leon’s Mayoral Campaign events. Further, in another timing snafu, it evidently escaped the geniuses at CD  14  (Alice Roth and Sarah Flaherty) that the date of the event, December 7th, just happens to be the 80th Anniversary of the attack on Pearl Harbor. Honest.

As reported by the Offutt Air Force Base:

The National Park Service and U.S. Navy will host a number of commemoration ceremonies in Hawaii that will also be livestreamed: 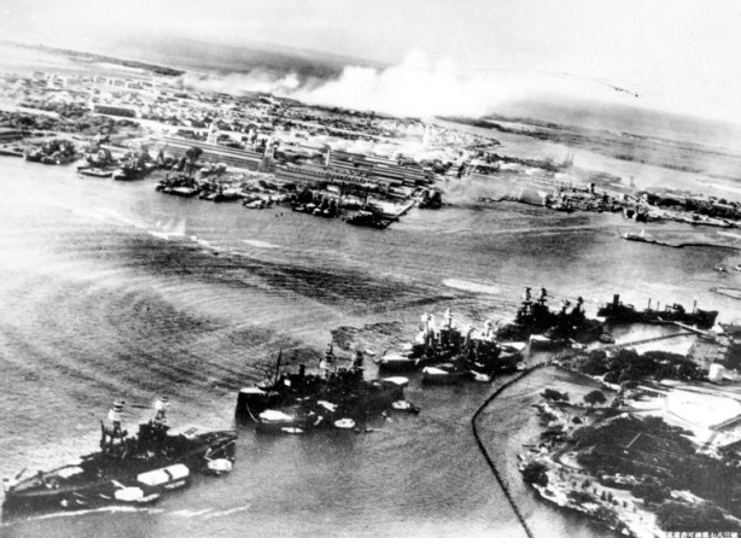 Dec. 7, 1941, began like any other Sunday on the island of Oahu. Service members and civilians were unaware history was about to be made in 115 minutes of devastation.

At 8:00 a.m., they bombed Wheeler Army Airfield northwest of Pearl Harbor. They destroyed 54 planes, killed 37 Soldiers, and injured 53 others as they bombed aircraft hangars and airstrips.

At 8:40 a.m., they focused their attack on Hickam Field, located on the southeast end of Pearl Harbor. They bombed the flight line, focusing on the B-17 bombers and destroying 51 planes. They killed 35 men in the mess hall as they were having breakfast. The total casualties for Hickam were 121 men killed, 274 wounded, and 37 missing.

The air raid on the Hawaii territory lasted until 9:45 a.m. HST. The attack was intended to prevent any action from the United States and to cripple the Pacific Fleet to prevent interference with the Japanese takeover of the Dutch East Indies and Malaya, enabling them to conquer Southeast Asia.

The Japanese were incorrect in their assumptions about the United States. This devastating surprise attack by imperial Japanese warplanes launched America into World War II.

In 115 minutes of mayhem and destruction, 360 Japanese warplanes sank two navy battleships - USS Arizona (BB 39) and USS Oklahoma. Many other ships were sunk, but later recovered and repaired. They destroyed 160 aircraft and damaged 150. They killed 2,403 servicemen and civilians and injured 1,178 others.

The National WWII Museum updated a list of surviving veterans by state Sept. 30, 2021. According to the list, Nebraska currently has 1,729 WWII veterans.

Although there is no official government listing of Pearl Harbor survivors, U.S. Department of Veterans Affairs statistics show that out of the 16 million Americans who served in WWII, only 240,329 are still alive.

Dec. 7 - a day to remember all those who made the ultimate sacrifice with their lives.”

I point out the importance of Pearl Harbor because it may be that Mr. De Leon is too young to have any familiarity with WW II. So I thought I would make mention of the trigger to World War II. It just seems to me that the anniversary rates a little higher in history than a Tree lighting event.  Silly me.

How About Redistricting Body Swapping?

There’s no nice way to put the shenanigans of the City Council over the issue of Redistricting.  Specifically here are the recent maneuvers of our three Councilmembers, believe it or not.

“Every ten years following the decennial U.S. Census, the Los Angeles City Charter requires that district boundaries for the City Council be redrawn so that each district is as equal in population as possible and practicable so that communities have equal access to political representation. As part of this process, a twenty-one member Redistricting Commission is formed with members from the public make recommendations on a redistricting plan to the City Council regarding the new boundaries for the City Council districts.”

Predictably, the City Council threw out the result and decided that they would put self interest ahead of legislative intent.  Here in Northeast LA, CD1, CD13, and CD14 quickly got to the down and dirty as Council President Martinez hand picked her cronies for a City “Ad Hoc Redistricting Committee”.

I was stunned by the email sent out by Mitch O’Farrell that he was humbled and proud to be appointed the Vice-Chair of President Nury Martinez’ “Ad Hoc Redistricting Committee. As our local Patch called it:

“When it reached the council for its portion of the redistricting process, Council President Nury Martinez blasted the map, saying Los Angeles ‘cannot reasonably move forward’ with a draft map that "raises concerns for so many marginalized communities."

Council members introduced dozens of changes to the borders, creating a hybrid map that was advanced out of the council's Ad Hoc Redistricting Committee. The map then underwent two state-required public hearings in November.”

In other words, by doing the bidding of our controversial City Council President, he will be rewarded with favors that you and I will never know about.

The result will be a legal fiction that invites litigation, just like the last time..  And largely unnoticed in the food fight and body swap between the 15 fiefdoms, let us take a moment to ask just why Gil Cedillo from CD1 wants to do a swap and get rid of Lincoln Heights, giving it to Kevin De Leon?  And what’s Mitch going to get for his unquestioning loyalty to (god save us) President Nury Martinez?

Most people probably didn’t notice that Cedillo’s last minute Council Motion 47 simply gave Lincoln Heights to Kevin De Leon, but it does. If you don’t think that was a back room deal, I got a really good real estate opportunity for you :-).

So who got what, and does any of it have anything to do with the City Charter requirements?  Not much.  Is Cedillo going to swap with Kevin for some of that developer money in Downtown LA that fueled Jose Huizar till he got caught?  Could it be becuase of Civic duty? Statutory due diligence?  Not a chance.  Maybe it’s Gill getting a wee bit tired of getting hammered by LincolnHeightsIntel?  Just might be.

You don’t have to be a rocket scientist to know that something is seriously wrong with the Los Angeles City Council. And they have made it very clear that In terms of political clout, you and I have about as much impact as a serf in pre-Revolutionary Russia.

The Council members have plenty of time for real estate developers, lobbyists, and the rich & powerful.

I don’t know about the rest of the City, but here in rapidly gentrifying Northeast LA, don’t bother to even ask what the heck our three Councilmembers are doing. Neither CD1 nor CD14 would respond to public records requests I posed. Duh!  Anyone interested in funding a CPRA lawsuit?  My email address is tony.butka@gmail.com.

A so-called public system that  operates 15-0 is simply hiding from the Councilmembers oath of office, and is really a kleptocracy that does  all the dirty dealmaking on the sly.  That is not democratic governance.