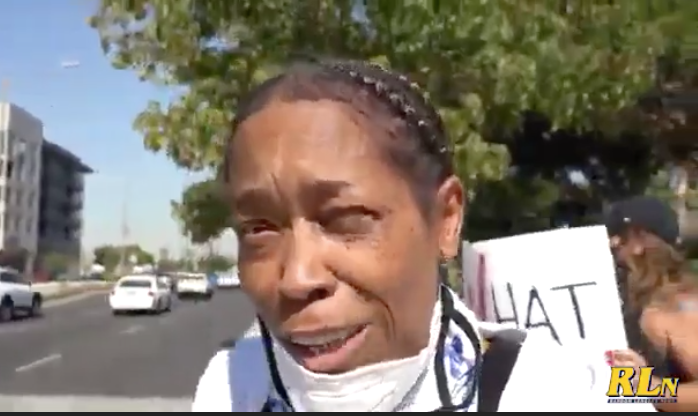 CARSON ENVIRONMENT - Carson residents are sickened by how city officials and the county have handled the repulsive smell caused by hydrogen sulfide in the Dominguez Channel.

Residents began reporting the smell before Oct. 1 but did not hear an official report from county or city officials until Oct. 8. Even then, misinformation spread like wildfire.

On Friday evening Carson Mayor Lula Davis-Holmes posted on her Facebook page declaring the cause of the smell was a pipeline leaking hydrogen sulfide. But agencies representatives of the Los Angeles Department of Public Works and Los Angeles County Fire Department in contact with Random Lengths News had already ruled out the possibility of any leakage.

“I have called for a full investigation because up until today, no information was released to the public or the city,” Davis-Holmes said. “My question to all involved agencies now that we have identified the problem is what and when will the problem be corrected. Who is at fault, and what will be done to prevent this from happening again. This lack of transparency is unacceptable.” 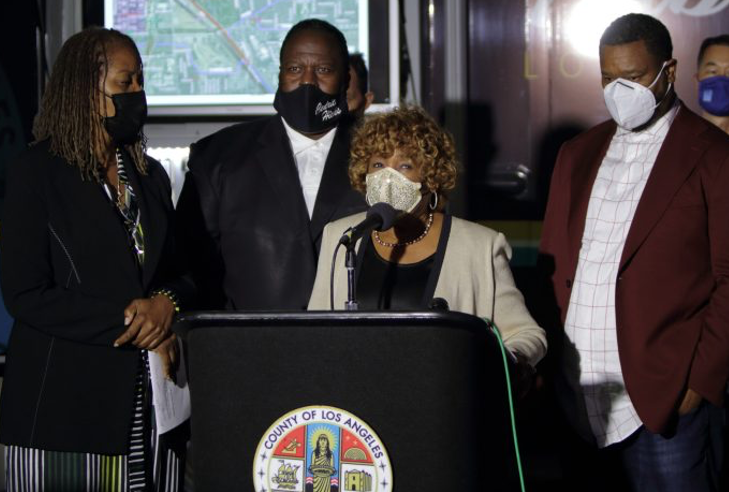 By Sunday, Davis-Holmes stated the origin of the smell was “organic waste material drying out after being exposed during low tide.”

“There has been a total disconnect of what the issue is and what the cause of it is,” she said. “There was no concerted joint effort task force between all the different public entities. I am appalled by that because it is our public officials’ responsibility to look out for this community. How on earth are we supposed to have any faith in their abilities if they can’t even take care of this. They can’t even get on the same page to make sure they know what the hell is the cause of this problem. While everybody’s farting around, all of us are sitting here suffering.”

Residents have found community in Carson groups on Facebook. Many share their frustrations and worries. Others have spent the week scrambling for information and investigating alongside the channel, sharing videos, photos and any details that might help them ease their distress.

The smell has only gotten worse. According to residents who commute to work as of Oct. 11, the odor can be smelled further into neighboring cities, including Long Beach, Torrance and Compton.

Lakeisha Coleman began to experience headaches on Sept. 22. On Oct. 1, she checked into the emergency room for intense headaches, stomachaches, and nausea. In a period of two weeks, she saw her doctor on four different occasions. They prescribed her multiple medications, ordered her to see a neurologist and recommended a sleep study. When city officials announced on Oct. 8 that they found hydrogen sulfide in the air near her home, her doctors stopped all treatments and advised her to leave Carson.

“I really feel like I’m taking off on an airplane every second of my life right now,” she said. “I felt like my head was just gonna open up.”

Coleman went with her doctor’s recommendation and drove up north for the weekend. While she was away, her symptoms disappeared, but when she returned Sunday morning, she began to experience the symptoms again — just three hours after her return.

“I really don’t have a plan,” she said. “I have four children in my home. My husband, my animals. This is just insane.”

Her doctors say the hydrogen sulfide was most likely the cause of her headaches.

According to The Los Angeles County Department of Public Health there is no long-term impact on health. Residents are encouraged to take several precautions, including closing their windows, limiting time spent outdoors and keeping air circulating in their home. 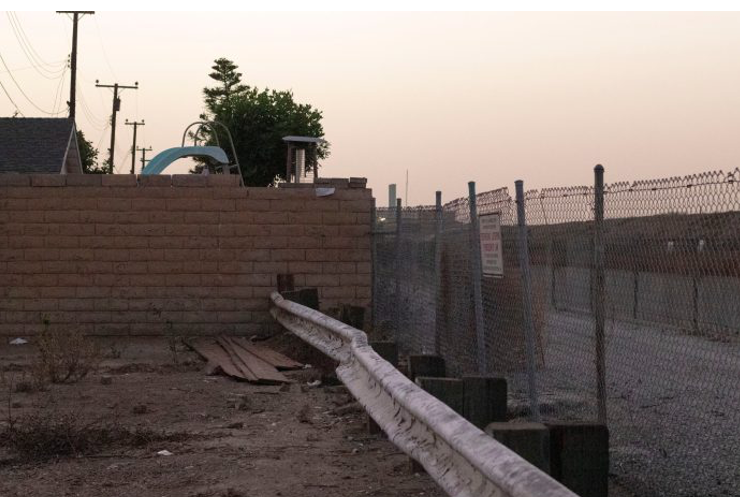 A backyard down Grace Avenue faces the Dominguez Channel. Photo by Fabiola Esqueda

The Dominguez Channel is in Sergio Avila and his wife’s backyard. In the last couple of days they both have experienced intense symptoms. Their four dogs began vomiting as soon as the smell began. The Avila family claim the smell is not new to them — it’s a common recurrence.

“You know what that smell has been here before but not for this many days,” Avila said. “What I don’t understand is how they say it’s not health hazardous but when I read online and searched up hydrogen sulfide it says if you smell high levels it can be deadly.”

Chapman woke up three times one night spraying Febreze, but nothing could mask the smell.

Brissa Gonzalez works at the SouthBay Pavilion near Avalon Boulevard and the 405 Freeway. She began smelling the rotten egg-like smell two weeks ago.

“Usually, when I am on my break I eat outside, but I can’t even do that anymore,” she said. “I lose my appetite.”

Businesses in the same shopping center are considering shutting down. Schools in the area began taking extra precautions, including moving outdoor activities indoors and closing all windows during instruction. Many parents have expressed concern with sending their children to school.

“You have to make the best decision for the situation,” he said when a small business owner emotionally shared that she was debating on temporarily closing her business.

How Much is Too Much Exposure?

South Coast Air Quality Management District found elevated concentrations of hydrogen sulfide in the air surrounding the Dominguez Channel near Avalon Boulevard and the 405 Freeway. According to the Occupational Safety and Health Administration, low concentration of hydrogen sulfide can cause headaches, eye irritation and nausea. Exposure to high concentrations can lead to more serious health complications — naturally by decaying organic matter or by pipe leaking from refineries.

According to the National Institute for Occupational Safety and Health the level of exposure depends on the duration and the dose. The gas is quickly absorbed by the lungs and can affect each individual differently. Children are more susceptible to inhale larger doses due to weight ratios and diameter of their airways.

The gas is detectable at concentrations as low as 0.5 particles per billion. Dangerously, continuous exposure can rapidly deaden the sense of smell. Although odor is an indicator of the presence of the gas, the level of smell does not indicate increasing concentrations. Meaning higher concentration can have less odor. For this reason, odor is not a reliable indicator of hydrogen sulfide’s presence and may not provide adequate warning of hazardous concentrations.

Community activist and founder of the Coalition for Safe Environment located in Wilmington, Jesse Marquez, said it is South Coast Air Quality Management District negligence in its failure to require a maintenance and replacement program that allows for the production of toxic gases, such as hydrogen sulfide to occur.

He frequently monitors the Phillips 66 Fenceline Air Monitoring Project, a website that measures any compounds and pollutants at the Carson and Wilmington refinery sites. The project was constructed to comply with the South Coast Air Quality Management District. This week Marquez realized the refinery sites in Torrance, Wilmington, and Carson measured acute reference exposure levels of hydrogen sulfide.

“I have received information notices from three different refineries that they were all having hydrogen sulfide problems,” he said. “Now, here’s the strange thing, that’s almost impossible, three at the same time.”

The Marathon Refinery in Carson showed concentrations between 28-32 particles per billion, with the highest levels detected late nights and early mornings. At this level, headaches, loss of appetite, fatigue, poor memory, and dizziness are likely.

As of Oct. 11, South Coast Air Quality Management District has yet to release the amount of gas detected to the public. Dr. Muntu Davis stated those numbers would be available soon. Residents are left wondering why the information was never available from the start.

“We’ve been pushing to try to get that information out,” he said. “I do want people to understand that these levels fluctuate throughout the day, and are different in different locations.”

Marquez said that it is required for South Coast Air Quality Management District to submit all emissions at the time of their report for their annual emissions inventory.

“They’re always hesitant in releasing any information to the public that could be damaging to them,” Marquez said. “But ultimately, they must report all emissions.”

Hydrogen sulfide is used in oil and gas refining. It can also develop naturally in sewers and enclosed spaces, such as manholes. With Carson being the home of the largest refinery in the West Coast, residents theorized there was a pipeline leak.

Matheny insists that there are no long-term health risks for residents. But the smell is horrendous.

“Listen, I can tell you, it’s a terrible smell,” he said. “It smells like something is decomposing. I was a paramedic for a number of years before I was promoted to engineer and I’ve seen a lot of decomposing bodies. And it’s that smell of something decomposing. It is horrible.”

Mark Pestrella, director of Los Angeles County Public Works, said the odor is a natural occurring process of vegetational decay that creates low dissolved oxygen level, which creates hydrogen sulfide. He said the lack of rainfall and heat has made the situation worse.

“They created organic material and then rapidly died off and when the material rapidly dies off it releases a tremendous amount of hydrogen sulfide,” Pestrella said. 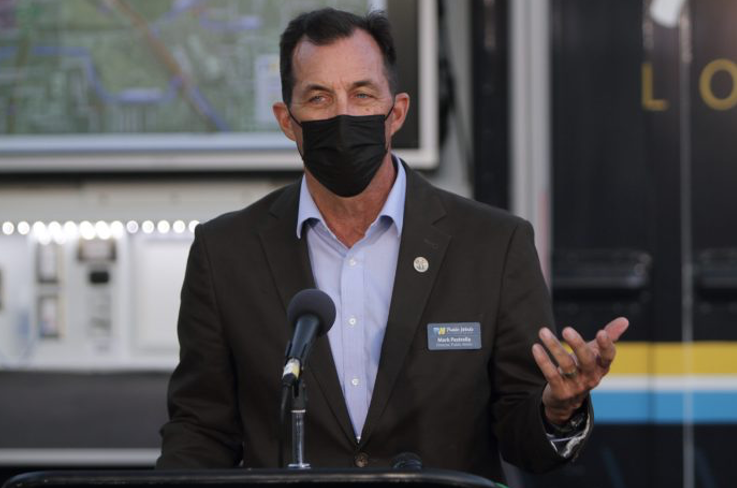 “What’s unusual about this event is its persistence and the length and the strength of the smell,” he added. “I really do appreciate the over 800 people who have called us.”

The Department of Public Works states it is still sampling water in the channel to see if there are any additional pollutants of concern beyond the hydrogen sulfide. There is still no solid plan on how to get rid of the smell. Public Works is hoping that the sampling could help develop scientific solutions to get rid of the odor or to put oxygen into the water.

Until then, residents are expected to be patient and wait.

How easily and how quickly is still up in the air.

“Clean it up!” Coleman exclaimed. “Some people may need to be compensated for their time away from home. But the most important thing is that they need to make it safe for us to live here.”

Lakeisha Coleman decided she will stay at a hotel away from the Dominguez Channel.

“It’s sad to have to leave your home,” she said.

Mayor Lula-Davis Holmes announced a reimbursement system for residents who need to buy any supplies to alleviate the burden of smell.

(Fabiola Esqueda is a recent UC Santa Barbara graduate, where she majored in sociology and earned a journalism certificate. She is a lifelong resident of Carson, an active member of the National Association of Hispanic Journalists, and a visual journalist who is looking forward to telling stories about the people and issues that impact her community.)