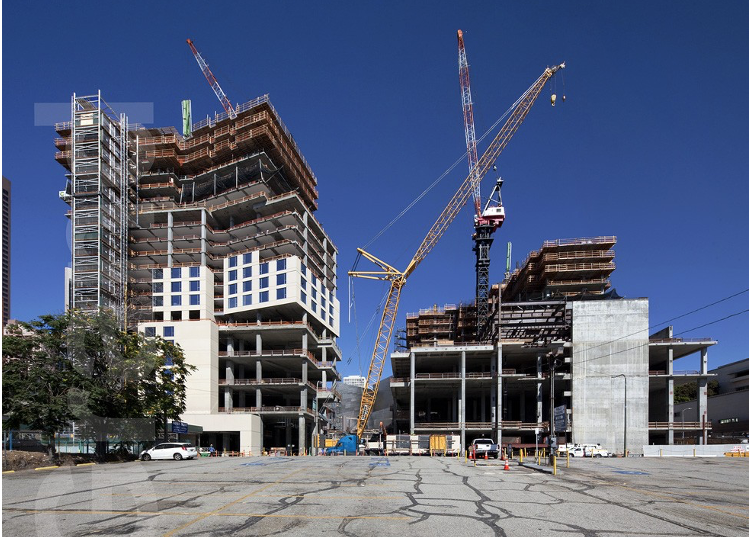 THE VIEW FROM HERE - City of Los Angeles councilmembers are as financially dependent upon never-ending construction as Afghan war lords are on the opium production.

Los Angeles’ economy rests upon endless construction in a city with a feudal political structure administered by a criminal enterprise.  Construction pours billions of dollars into the local economy even as it destroys our quality of life.  The councilmembers are willing to do anything to keep the developer dollars flowing into horrid projects (and their own off-shore bank accounts) with zero concern about the impact on the human beings they were elected to serve.  While LA has other businesses such as the film industry and health care, construction is historically ripe for corruption.  The larger the project, the greater the impact for corruption.  When one adds the financing of construction and other land uses, Wall Street becomes the major behind the scenes player.  It did not have to be this way.

Over 100 years ago, the city of Los Angeles civil engineers wrote the 1915 Study of Street Traffic Conditions in the City of Los Angeles which saw the nightmare which densification of the urban areas brought.  Perhaps, it was due to the rapid population increase around 1900 and the quick reliance on mass transit (trolleys) and then individual transit (private autos) that shocked these professionals to undertake a worldwide study of transportation, land use policy and quality of life.  As they explained, densification would be lethal to a decent quality of life.

Between 1890 when LA had 50,395 people and 1900, when we had 102,479 the city population more than doubled. Ten years later in 1910, the population more than tripled so that we had 319,198 people. By 1920, we were over 575,000 ppl.  When people have to either walk or hitch up a buggy to drive somewhere, people need to live close together.  Hence, Eastern cities have Brownstones and row houses as they all pre-date motorized transit.  Los Angeles’ population leap, however, began just as trolleys could move large numbers of people rapidly over long distances.  At this point, let’s remember, what was “rapid” and ‘a long distance” at the turn of the 20th Century was based on walking and the horse as the main modes of transportation.   When a family had the option for the father to walk 15 minutes to work or ride 15 minutes to work and also live in a nice single family neighborhood with a yard and fruit trees, families moved away from DTLA.

When the private auto took over from trolleys, families could move father out where land was less expensive.  By 1915, the city’s civil engineers saw that office and retail businesses concentrated in core areas or along certain main highways could no longer serve the huge population.  They realized that all types of land uses had to expand outward as the families bought homes farther from the core areas.  The engineers also knew that the few wealthy landowners in DTLA wanted the population boom to serve their own financial interests by keeping offices and retail in the core area.

“. . .  no municipality is justified in adopting a policy which would tend to retard the removal of business centers to their natural geographical location. Such a policy would be nothing less than a deliberate exploitation of civic resources for the benefit of the limited number of property owners enjoying abnormal incomes from rental privileges.” 1915 Study page 38

Quality of Life for Angelenos has not been part of the public discussion since shortly after World War II when the state and city adopted a soviet style Community Redevelopment Agent (CRA/LA).

The CRA/LA did the exact opposite of what the 1915 Study said should be done.  In its more genteel language of “retard the removal of business centers to their natural geographical location,” the 1915 Study meant that as families moved away from DTLA, all other business uses should follow the families. No bedroom only communities! As 1916 Study knew, the sole reason for keeping business in core areas is for a few landowners to exploit everyone else.

The 1915 Study explained that building up a densified DTLA, Century City, Hollywood, was a form of theft of wealth. When the reader sees this old style of writing, one hopes the reader realizes how long ago these basic principles were laid out for us.

“Such removal; or partial evacuation of territory, involves no municipal loss. Diminution of assessable values in the one case is offset by increase in the other; and individual loss on any particular lot or parcel can only be regarded as the natural subsidence of inflation.”  1915 Study page 38

In modern day language, when all land uses can expand outward as the population moves, no wealth is lost to the city. Rather land farther out becomes worth more and land in the core is worth less.  Without the corrupt CRA, those offices towers on Bunker Hill would have been low-rise garden office complexes in the Valley near the employees’ homes.  The many property owners in the Valley would have their land value increase, while the land values in tiny Bunker Hill would be constrained.

The CRA opted for centralized planning of mega projects violating every principle of the 1915 Study.  The landowners’ game plan was simple – buy the city council.  The CRA quickly capitalized upon the destruction of poor people’s homes to construct unwanted gigantic towers favored by Wall Street financiers.  As the mathematics of the 1915 Study had proved, there was no freeway wide enough to bring all those hordes of people into DTLA each morning.

The developers did not see lethal smog and commuters’ spending hours in traffic congestion as a problem but rather as money making opportunity – Mass Transit.  Although Angelenos fought subways and fixed rail, the politicos went to Washington to get federal money for mass transit.  Bunker Hill was turning into a financial flop and was threatening the other densification plans for the Basin.  Angelenos themselves liked LA’s “being 72 suburbs looking for a downtown,” except Angelenos were not looking for a downtown.

Except for buses, Mass Transit has been an unmitigated disaster for Los Angeles.  Its purpose is to carry people directly to the office towers in DTLA Bunker Hill, Century City, and West LA, but it is mathematically impossible in a huge urban area.  Ridership has declined and will continue to decline but taxpayers are saddle with hundreds of billions of dollars in public debt to pay for more subways and fixed rail transit which has a life span of only 30 years before it need to be refurbished.

The developers justify subways as necessary to bring people to their huge projects.  Because mass transit is horrendously expensive, the city immediately claims that it needs more densification to gain more riders.  They justify the Subway to the Sea by saying that along the subway route, they will construct apartments which will be the equivalent of 125 linear miles of single family homes from Santa Monica to DTLA.  It’s the same as giving arsenic to someone who is dying from arsenic poisoning.  LA needs no more mass transit and no more densification.

Los Angeles Is Dying but No Politico Will Admit It

No politico will admit that densification in conjunction with mass transit projects is destroying Los Angeles.  The endless miles of squalid homeless encampments is one window to LA’s future.  The politicos only so-called solution is to hide the homeless.  Stick them in tiny homes were two people share 64 sq ft. Evict the mentally ill from their rent controlled apartments and then change the state law so we can lock them up in mental wards.  No one proposes the obvious, i.e. stop tearing down poor peoples’ homes in order to construct huge projects.

If the hundreds of billions of corruption dollars flowing into the LA economy  stops, the economy will crash.  No candidate will admit this reality.