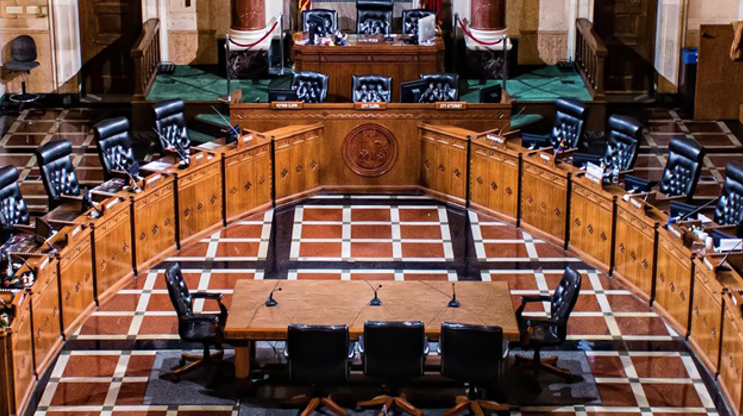 A VIEW FROM HERE - Angelenos are like Covid deniers.  No matter how bad things become, they refuse to admit something is wrong.

Like anti-vaxers and anti-maskers, Angelenos insist on doing the same thing and become outraged when anyone suggests that they can stop the death and destruction.

There will always be greedy politicos and corrupt judges ready to fleece the public of everything. The solution is not to elect saints to the city council or appoint honest people as judges.  For one thing, the public has no way to distinguish a scoundrel from a mensch. Another problem is that the structure of government can either facilitate or retard evil.

One civic evil, which Western Civilization has come to condemn but which keeps cropping up, is accumulation of power in the hands of a few psychopaths whose motto is “Too Much is Not Enough.” The city of Los Angeles is tailor made for vast, never ending corruption.

In 1925, the city charter divided Los Angeles into fifteen (15) council districts each with one councilmember. Also, the state Constitution forbids political parties in local elections. Together, these two laws create a crimongenic city.

While many legislatures thrive on this type of deal making, especially in Congress, it is bribery under California law.  There is a significant difference between Congress and the LA City Council. Congressmen belong to political parties who have particular agendas over and above what an individual Congressman may want.  The power of political parties in Congress counterbalances the bribery passions of individual Congressmen.  Rather than discuss Congress further, let’s return to Los Angeles.

Garcetti’s Mini-Me Mitchie O’Farrell, for a hypothetical example, can construct atrocious mixed use project as far north as the south side of Franklin Ave and Councilmember Ryu had to vote Yes.  Worse yet, one councilmember is not to criticize a project in another district.  The deaf, dumb, and blind LA Times (aka Pravda West) ignores the fact that Garcetti’s Manhattanization legally destroyed his CD 13 between 2001 and 2010.  In  ten years, Garcetti’s CD 13 lost so many people that it ceased to be a legal council district.  Rather than penalize Garcetti, he was rewarded and CD 13 borders were expanded so that it took over parts of CD 4 and parts of Koreatown.  Between 2010 and 2020, Mini-Me continued the Manhattanization of CD 13 which lost an additional 12,500 ppl by 2020.  Yes, corruption destroys, but developers make billions of dollars.

No matter how much Councilmembers Koretz or Cedillo may realize that the Manhattanization of Los Angeles is destroying LA as a viable urban area, there is nothing they can do. They absolutely, positively must vote Yes for each and every project. As Citywatch predicted years ago, corruption was driving people out of LA. The 2020 Census showed that the city as a whole has lost population since 2010.  The city constantly lies and says that we are growing and we need to construct more and more housing, but Angelenos believe anything they are told. They are like die hard Trumpists who believe Trump won the Nov 2020 election.

Why LA’s Criminal Vote Trading System Is Out of Control

By virtue of the state constitution, city councils may have no political parties.  If Los Angeles City Council had political parties (Whigs and Tories), then two bad things would combat each other.  The individual corruption of Whig party member  Mini-Me would be balanced by his political party. When Mini-Me wanted to destroy more of Hollywood, it would reflect on the Whig Party and Angelenos in other parts of the city would complain to their Whig councilmembers.  The Whig Party would favor its own power over the corrupt ambitions of a single councilmember.  Also, the Torries on the council would vote against it. Without the political party dynamics on the city council, the criminal vote trading system is out of control.   That is why each step in the destruction of Hollywood has received unanimous council approval.

We can destroy the corruption without opening the door to political parties. The key problem is each district’s having only one councilmember, who knows that whatever she wants, even if 90% of her district is opposed, knows the city council will give her unanimous approval.  If, on the other hand, each council district had three simultaneously elected councilmembers in the same election , then no single councilmember would speak for a district.

It Is Crucial All Three Be Elected at the Same Time

The top three voter getters become the three district councilmembers.  Assuming Wall Street still snookers enough CD4 voters to elect one of its stooges, the other two Councilmembers are unlikely to be Wall Streeters.   One may be a preservationist, one may want more parks, one’s shtick may be less traffic congestion.  When all three are simultaneously elected, the developers cannot control any district.