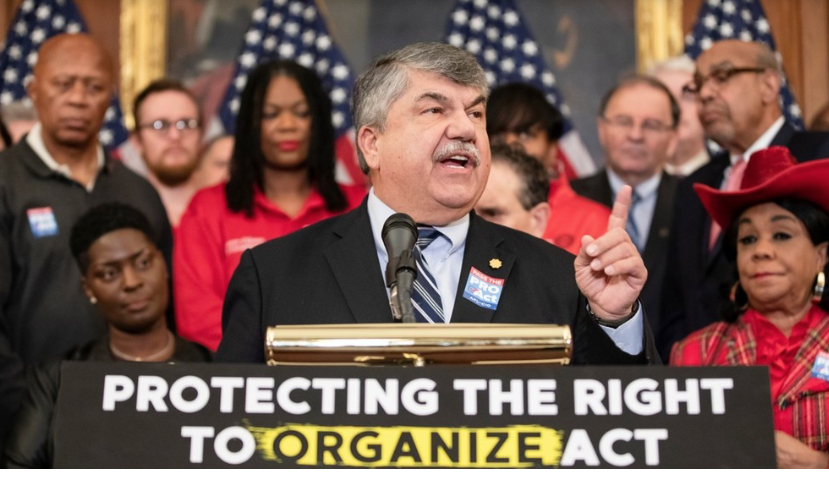 LABOR VIEW - Without the power of the union to stand up for workers, very little progress can be made in pay equality, diversity inclusion, workplace conditions, and so on.

Discrimination in the workplace is holding the United States economy back. In a study performed by Credit Suisse/McKinsey, businesses with a high LGBTQ employee rate outperform less inclusive companies at a rate of 10 percent on average. Yet LGBTQ workers in the United States still face extreme discrimination in the workplace. Unions and strong labor laws help to prevent employers from violating civil rights as protected under Title VII of the Civil Rights Act. They also help reduce income equality, which the LGBT community faces at much higher rates than the non-LGBTQ community. Though the National Labor Rights Act (NLRA) began holding employers accountable, the Protecting the Right to Organize (PRO) Act strengthens the power of the people to improve their workplace conditions, pay, and benefits.

Being part of a union is a worker's most significant strength when combatting unequal treatment, as, under union contracts, you cannot be fired for gender identity or sexual orientation

The world we live in now strongly favors white heterosexual men in the workplace. Twenty-two percent of LGBTQ people earn less than the federal poverty level at $12,000, compared to 16 percent of non-LGBTQ people (NBC). That rate only increases when you account for just bisexual women and transgender people, roughly 30 percent each. Approximately half of LGBTQ employees think that being "out" in the workplace could detriment their careers. Forty-three percent have chosen not to come "out," most likely for this very reason.

Transgender people face a difficult struggle when it comes to workplace rights. According to the US Transgender Survey, 77 percent of respondents reported that they chose to hide or delay their transitions to keep their transgender status a secret to avoid mistreatment. Some of those respondents even said quitting those jobs. Perhaps as a result of these fears, over 15 percent of the transgender population is unemployed. In addition to concerns of workplace treatment, transgender people also must contend with the lack of transition healthcare built into the insurance policies that employers develop.

In positive news, the amount of LGBTQ elected officials is rising. According to a census performed by Out for America, nearly 1,000 LGBTQ people hold public office in 2021. These include two United States senators and nine members of Congress. One of note is Kyrsten Sinema, the first openly bisexual Congresswoman to serve in both the House of Representatives and the US Senate. News like this offers hope to the LGBTQ community in gaining better representation for their rights in the workplace and beyond.

One thing that helps the LGBTQ community in their fight for equal labor rights is union representation. Being part of a union is a worker's most significant strength when combatting unequal treatment, as, under union contracts, you cannot be fired for gender identity or sexual orientation. Many states, especially those in the Southern United States, do not have anti-discrimination laws that prevent this type of discrimination. Therefore, it is up to the union to be a watchdog for the rights of these LGBTQ workers when they often do not have the means to fight their employers' abuses on their own.

Without the power of the union to stand up for workers, very little progress can be made in pay equality, diversity inclusion, workplace conditions, and so on. The National Labor Rights Act of 1935 made the right to unionize legally protected under federal law. But currently, the NLRA does not push back hard enough on employers who can quickly curtail employees' rights. According to the AFL CIO, employers break the law "in 40 percent of all union organizing elections." As of now, there are no legal means to prevent several employer tactics from stopping unions from forming. These include coercion, lies, firing, and intimidation. Many employers, for instance, hold mandatory meetings where the main topic, and frequently the only topic, is anti-union rhetoric.

That's where the PRO act comes in. As part of the bill, which passed the House on March 9, 2021, and was received by the Senate on March 11, it broadens "the scope of individuals covered by fair labor standards," allows labor organizations to encourage employees represented by separate labor organizations to engage in strikes, and restricts the power of employers from bringing legal action against such organizations. Employers would no longer get to coerce or make mandatory any anti-union meetings and would prohibit any agreements for an employee to waive their collective or class-action legal rights.

We need to pass the PRO Act to better represent all workers, especially those most vulnerable to discrimination and employer abuse.

Under the law, it would force employers to notify all new employees of their rights under the National Labor Rights Act and post these rights where employees congregate. It also requires all employees—whether union or nonunion—to contribute to the cost of union representatives performing collective bargaining for the benefit of all employees of a company. These steps help empower employees in understanding their rights and what they are legally capable of doing when defending their rights.

If the past year and a half have taught us anything about workers' rights, it's that the service industry demands its workforce to labor tirelessly amid challenging conditions. Amazon delivery drivers were reported to have to use water bottles in which to urinate to keep up with the increased amount of deliveries and time restrictions. Restaurant and grocery store workers were hassled and even attacked for asking customers to wear masks or show proof of vaccination before they entered their buildings. This has led to a sharp increase in people leaving their low-wage jobs to seek out better opportunities. The Bureau of Labor Statistics reported that four million people quit their jobs in April 2021 and another 40 percent of workers are considering leaving their current jobs in the next year.

All this is to say that we need to pass the PRO Act to better represent all workers, especially those most vulnerable to discrimination and employer abuse. The PRO Act expands the power of the employee and does not by any means limit the economic growth of American businesses. In fact, it improves it. A company that values its workers and the most vulnerable population groups among them can only prosper and grow. Call Sen. Kyrsten Sinema at (202) 224-4521 to tell her to stand up for LGBTQ workers and support the passage of the PRO Act.