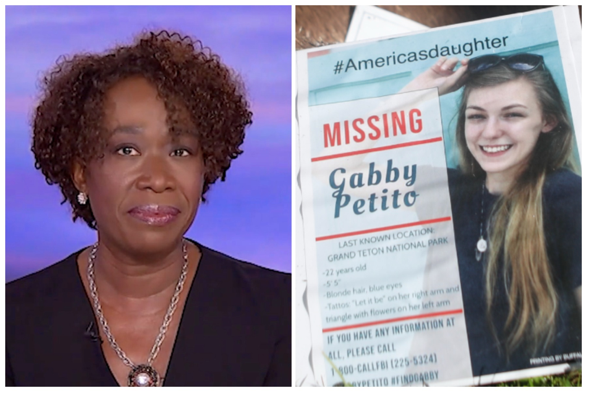 THE DOCTOR IS IN - It's undeniable that the Gabby Petito murder story describes a horrible tragedy and loss for the victim and her miserable, heart-broken family.

It's also undeniable that the attention paid to this tragedy is disproportionate to so many other murder cases involving black murder victims in our nation.

It's undeniable that MSNBC host Joy Reid has a strong point to make, and a strong sense of the truth, when she describes this "missing white woman syndrome".

But it's also undeniable that while the nation was compelled to read innumerable stories about the unfolding Gabby Petito tragedy, and while it's a horrible fate this woman met at so early an age, Joy Reid is a miserable coward (as are so many so-called "liberals") when murder victims in Chicago, New York, Los Angeles, and other major American cities go ignored.

It's undeniable that every black victim of an avoidable police shooting is as miserable a tragedy as Ms. Petito's story, as Joy Reid champions in her coverage.

Yet it's equally undeniable that Joy Reid and the overall left-wing media ignores the ocean of black American blood that is in the hundreds to thousands every year, but are not "newsworthy" stories because black American murders happen all the time--no biggies, just another black American slain, right?

It's undeniable that so many on the Left shrug their shoulders about black-on-black violence, and brown-on-black violence, because to them "Black Lives DON'T Matter" when it occurs in our nation's big cities, and the Right is told shut the hell up when they decry the holocaust of black Americans in our cities.

So Joy Reid is right about "Missing White Woman Syndrome". She's right to raise the subject of police brutality.

But it's undeniable that Joy Reid's cowardice, and her unspeakingly horrible blind eye to what's killing so many fellow Americans who are black, are enabling murders to go untold and unstopped in our nation.

Because Black Lives DO Matter...except when it's tolerated and ignored when it's just not newsworthy.

Kyrsten is NOT Our Only Hope

Water Board Member Speaks Out On Legal Victory Against Agency