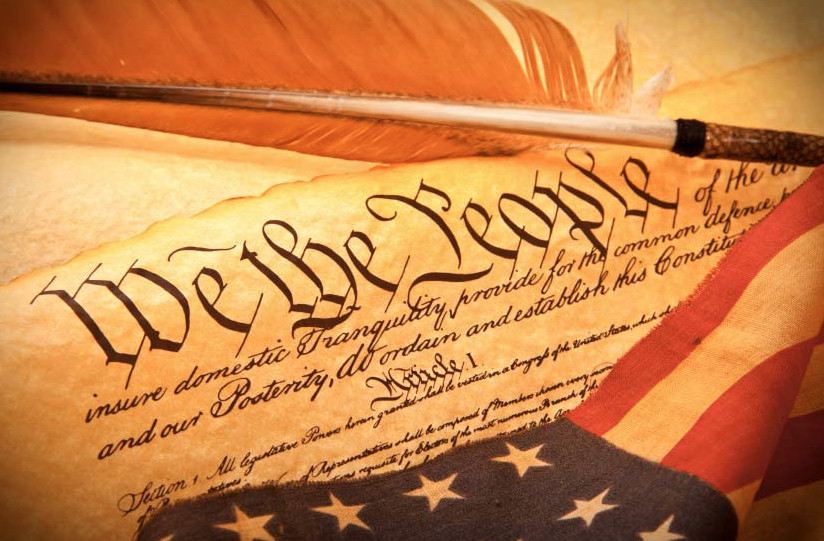 A VIEW FROM HERE - The Right Wing and the Left Wing Share Two Ideas.

(1) Both correctly believe that someone is out to get them. (2) Both wrongfully identify the danger as the other.

As explained previously, the nation’s founding principle is that the purpose of government is to secure individual inalienable rights including life, liberty and the pursuit of happiness.  Hence, a government which allows its citizens to be victimized and deprived of their inalienable rights is per se illegitimate.

The Declaration does not authorize a small group of individuals to overthrow the government.  Rather, it states, “it is the right of the people to alter or to abolish it, and to institute new government.”  The phrase Right of the People does not mean that a tiny faction may attack others or mount an insurrection.

The Declaration Excised Group Rights As Inimical to Inalienable Rights

The Declaration, which is our foundational legal document and precedes and is more basic than the US Constitution, expressly repudiated any form of group rights.  The phrase “that all men are created equal” refers to each individual and leaves no room for mankind to be divided into groups where assessing who has which rights depends on the group to which they belong.  The phrase is emphatic as it merely re-enforces the phrase, “ . . . are endowed by their Creator with certain unalienable rights, that among these are life, liberty and the pursuit of happiness.”  The word “equal” clarified that some men did not have more, greater or stronger inalienable rights than others, e.g. English Peerage System.  As for slavery, the Declaration goes even father and changes John Locke’s formulation of “Life, Liberty and Property” to “Life Liberty and Pursuit of Happiness” so that no one could later say that the Declaration did not apply to slaves since they had the legal status of Property in 1776.  Every slave owner who signed the Declaration knew that he was making the institution of slavery legally indefensible and that within the foreseeable future, slavery would end.

Jefferson and James Madison held similar views on the harm that group rights had for individual rights.  In Federalist Paper #10, Madison discusses “factions” which in today’s parlance include Group Rights, e.g. White Supremacy, Identity Politics, Wokerism, Trumpism, Fundamental Christianity, Wall Street, etc.  When Jefferson returned from France after the Constitution had been drafted, he was instrumental in having the Bill of Rights added with the First Amendment’s separating religion from the the government.

“The instability, injustice, and confusion introduced into the public councils [by factions], have, in truth, been the mortal diseases under which popular governments have everywhere perished; as they continue to be the favorite and fruitful topics from which the adversaries to liberty derive their most specious declamations.”

With the Bills of Rights added to the Constitution, Madison and others rejected a democracy, as it was given to impassioned mob rule. The majority believed that a large Republic would prevent one faction from seizing control.  As others have noted, the Founding Father knew how democracies allow Group Rights to ruin societies.  “Men of factious tempers, of local prejudices, or of sinister designs, may, by intrigue, by corruption, or by other means, first obtain the suffrages, and then betray the interests, of the people.”

No where, however, do the authors of the Federalist Papers foresee the Supreme Court’s elevating Group Rights above individual rights so that Group Rights would pervert the national discourse.  They thought that they had exiled Group Rights from our government, even though they knew that mankind by its nature would always be forming and joining groups with opposing interests.

George Washington rejected the monarchy as that would have immediately introduced the group rights of Peerage.  He was dismayed by the emergence of political parties where party loyalty trumped truth and decency. "I am thoroughly convinced I should not draw a single vote (for a third term) from the Anti-federal side."  One reason the Republic survived as long as it did was the Dem and GOP parties were subject to internal division so that GOP members and Dem members often found allies in the other party.  The interests of the Southern Democrats balanced those of the Northern Democrats, while many GOP had more in common with some Dems than with the extreme part of the GOP.  July 2, 2018, The New Yorker Magazine, The Rise of McPolitics, by Yascha Mounk

In 1950, the American Political Science Association, ignoring the Declaration, the US Constitution or the Federalist Papers, thought it would be a good idea to divide the nation into two warring ideological factions, where party loyalty was all important. To accomplish this goal, they would eviscerate local control of the parties in favor of a unified national agenda for each party. Then, like a prize fight,  whichever party knocked out the other could trample over the other.

The best way for a party to guarantee a reliable voting block was Group Rights.  Along came the Great Society, when Congress was still congenial club and was the product of Kennedy who was strongly pro Civil Rights and pragmatic Lyndon Johnson who had realized that President Lincoln was right -- “a house divided could not long endure.”  E Pluribus Unum meant one nation from many different peoples, i.e. The Melting Pot and the Salad Bowl Theories.  Under either theory, individuals do not give up their unique heritages, e.g. Jews do not become Christians, the Irish do not become Dutch, etc.

The War on Poverty, like other wars, did not withstand its first contact with the enemy, i.e. Group Rights.  No sooner had the government launched a nationwide program to open the “opportunity structure” to each individual regardless of race, creed, and color, than politicians threw away any effort to help individuals in favor of Quotas by race and ethnicity.

Two forces lead Americans to accept race - ethnicity based quotas.  (1) The horrible treatment of Blacks and (2) Brown vs Board of Education which withheld from Blacks the inalienable individual right of Liberty and instead ended segregation because it did not have equality of results for Black children.  As soon as politicos start comparing the statistical results of different groups and insisting that outcomes should mirror a group’s percentage of the population, then a group gained power by proving it was doing poorly due to its being treated badly by another group.

Wall Street!  As long as Blacks rail against evil White people and demand slavery reparations and Whites scream that Mexicans are stealing their jobs and should be kicked out, no one notices that Wall Street thrives.

Someone is out to get you and it is not White people and it is not minorities. It’s Wall Street.  It uses Group Rights to divide America so that it can conquer America.